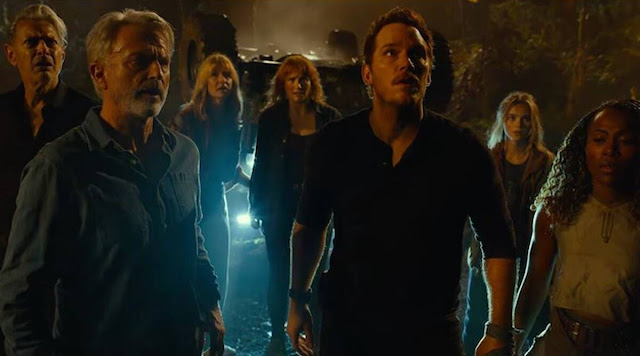 I have seen all of the Jurassic World films, but they all run together in my mind like a messy finger painting--with nothing noteworthy or distinctive about them. I will remember Jurassic World: Dominion for something though--giant locusts.  Also, for the calculated move of bringing back the trio of Laura Dern, Jeff Goldblum, and Sam Neill, who starred in the original incarnation, and despite their breath-of-fresh-air charms, seem a bit shoehorned in here in this overstuffed eco-horror monster movie. There are some worthwhile things about Dominion, another creaky entry from Colin Trevorrow into a franchise that's definitely grown long in the tooth. The special effects are spectacular--with dinosaurs that are quite life-like and not overtly sun-flared CGI-looking. The sound design is a fun ruckus, almost shaking the theater to Sensurround disaster movie levels--a throwback to another era of Universal Studios product. Dominion sometimes speaks to the large anxieties of our times: living through and with the tragedies of climate change and also to corporations that manipulate and dominate not just the material world, but aspects of the natural world as well. Here, a soft-spoken, non-assuming Campbell Scott's dodgy Lewis Dodgson devilishly exploits genetics to control earth's food supply. But the parallel storylines of the original cast members in one thread with bland Chris Pratt and Bryce Dallas Howard's lagging tale in the other, don't quite unite satisfactorily, even if DeWanda Wise proves to be a an enlivening action star and Goldblum, in particular, offers some needed jaded humor in the soggy bog of the latter half. Steven Spielberg's (who executive produced Dominion) original, based upon Michael Crichton's novel, still remains unmatched in its ability to marry intriguing, weighty themes with awe-inspired and exciting dino-action. Young Isabella Sermon's plotline of cloning and her late mother's experiments is a bit of drag too--ultimately, we honestly just want to get back to dinosaurs stomping about and terrorizing people and audience members calling back at the screen. **

Posted by MrJeffery at 2:25 PM