revisiting the house of the devil 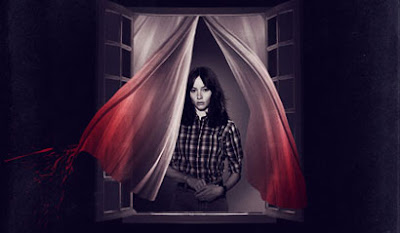 I'm joining in on Final Girl's Film Club this week for the first time with a revisit to one of my favorites, The House of the Devil. I originally reviewed the film here as "refreshingly low-key."
It's always exciting for a horror buff to discover that hidden gem. On IFC, I caught 1980's The Hearse, a drive-in ghost story about a woman (Trish Van Devere) who is terrorized by a mysterious hearse while staying at her dead aunt's house. It's not particularly good but I can appreciate its vibe. It seems to me whether or not you "enjoy" a film like The Hearse, will likely dictate your feelings on how you feel about The House of the Devil. West dubs it as a "period piece," something rarely mentioned in reviews of the film. So inspired by this particular Hearse era, West nails texture. All of the details are exactly right. The orange foam headphones, the tangled phone cord, the jokey answering machine message, paper Coke cups, the soundtrack choices (as the Greg Kihn Band's "The Breakup Song" suggests, Hollywood lamentably really doesn't write horror films like this anymore) the backpacks and denim, the moody score (by Jeff Grace) and film quality--shot on 16mm (abundant in the 1980s).
The script is also refreshingly free of too many in-jokes, which seems typical and crippling of film throwbacks, spoofs or tributes (the inclusion of Dee Wallace as "The Landlady" is such a perfectly earnest choice, not a cheesy wink). In an interview with Cinematical, West commented, "So when I set it in the '80s, a lot of people call it a homage or a throwback and I don't really see it that way. I'm not so ignorant to say there isn't a few nods in the movie, but really just wanted to make an authentic period piece; if the movie had taken place in the '50s, I'd have made it as authentically '50s as possible." And yet the way the film is done, it suggests homage. Think of how differently Far From Heaven would be perceived if not filmed in that lush, Douglas Sirk-ish style. Aside from the freeze frame opening and closing credits, here, the blandness (Jocelin Donahue is our very ordinary heroine) is part of its charm: the film seems to run in real-time fashion, building slowly to its bloody conclusion. That episodic build-up has divided critics and film goers, used to quicker, more complex plot lines. And the climax isn't necessarily as riveting as it could have been. Hollywood Reporter's Kirk Honeycutt bemoaned that "the story takes place in the late 1980s for no apparent reason other than writer-director-editor Ti West doesn't want mobile phones to gum up his feeble plot." Of course horror buffs are smarter than that and know why the 1980s are important to the intrinsic feel of the picture. And it's so obvi that this is not late-80s but early or mid (Gerwig suggests in an interview that West was adamant that it was taking place in '83).
Since much of the running time is spent on our heroine bumbling around a house, I can understand why horror fans may not really like the film. It came out in the midst of feverish underground hype (the trailer is excellent), not to mention its slick, nostalgic marketing (the retro posters and clamshell video release). West's strength is with creating a banal atmosphere not typically seen in film today (atmosphere instantly conjures flashy sci fi and prize winning novel adaptations). Even the pace of the movie itself (The Hearse is pretty slow burn, suspense-less stuff too) is part of the atmosphere as well. 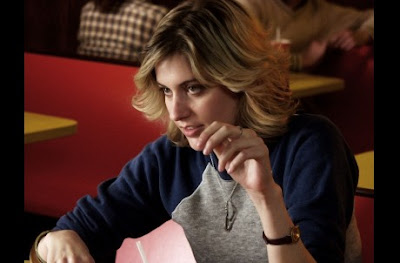 Since I first saw the movie, it's been great to see the rise of Greta Gerwig who was so memorably Terri Garr-esque in Greenberg. As the quirky friend in Devil, she's both annoying and endearing and seems to be having a great time. She remarks, "I think people took to it because, in many ways, it is the antithesis of the way people think of lo-fi horror movies looking. People are hungry for good, small movies that have some style."

My friend Katie, a Connecticuit native, was kind enough to snap this photo of the actual house in Lime Rock. I love it! 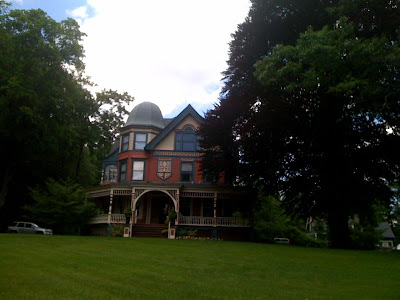 Posted by MrJeffery at 7:43 AM