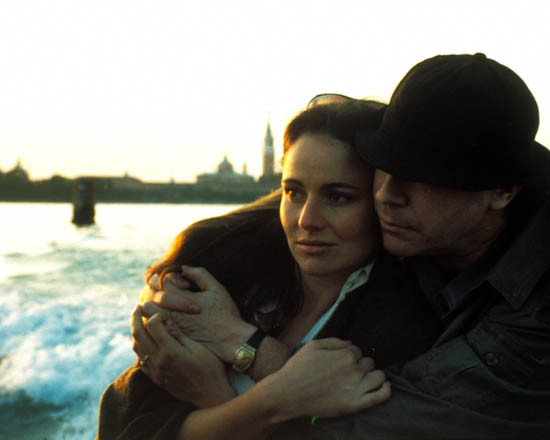 There's something about the rhythms in the dialogue of Henry Jaglom's films that I just adore. An improvisational feel: not quite real-life, but still performative--almost a "moviefied" version of dialogue. Last Summer in the Hamptons is one of my all-time favorite films, and I remember distinctly watching it over and over when I was a teen. There was something about the mood and distinctive locations of the film--not to mention the magnetism of the actors and the scenes that played out. 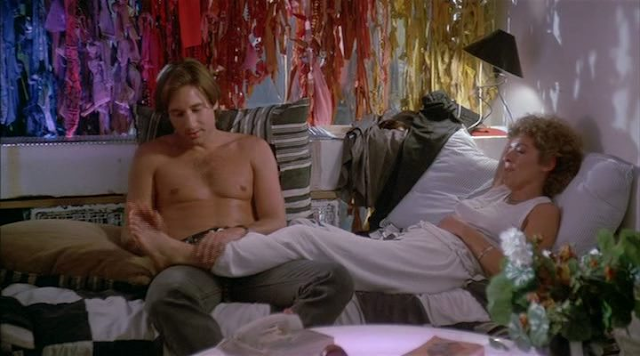 In 1992's Venice/Venice, Jaglom plays a director named Dean, who is at the Venice film festival for the only American picture in competition. Venice/Venice was actually filmed during the 1989 fest in which Jaglom's New Year's Day screened. The young David Duchovny is the star of that film, and also appears here, as an insecure, restless sun-tanning actor, who seems to be aiming for something greater. It's interesting to watch him in retrospect as he later becomes such a famed celebrity and even the titular subject of a pop song. As with Jaglom's other movies, the craft and hierarchies of art, performance, vanity and commerce gets a sort of gentle drubbing. As Jaglom's Dean gives terse, cranky interviews for the press, the alluring Jeanne (Nelly Alard) watches admirably and works up the nerve to talk to him. Of course Dean is attracted to Jeanne (just noticing the similarities in their names now); if Jeanne is attracted to Dean, it's not entirely clear why. Is she so enamored by his films? He isn't attractive so to speak, nor does he seem to be much fun to be around. But there is a push and pull between them--a dynamic--that Jeanne, with her sensuality, wit and sharpness, fosters. It's sort of a compelling romance to watch in its unnerving oddness.

When the film flips to the vibrant "other Venice" in California (where we see a time capsule of Venice Beach as it was; even one of that summer's ubiquitous Batman logos appears), we are introduced to Dean's lover, Peggy (Melissa Leo). Since her earliest roles, one can see how completely (almost scarily so) committed Leo is to her craft. It is what continues to make her such an exciting actress to watch. Here, with her shaggy golden curls and emotionally open face, she's in such stark contrast to Jeanne's dark sleek hair and air of effortless, sunglasses perched on crown, French posh-ness. But the contrast doesn't fester into a typical combative element between the two women. Instead, Leo delivers a bravura, complicated performance that's a mixture of receptiveness, sympathy, trepidation, and hurt. It creates an engaging connection between the two characters and actors. 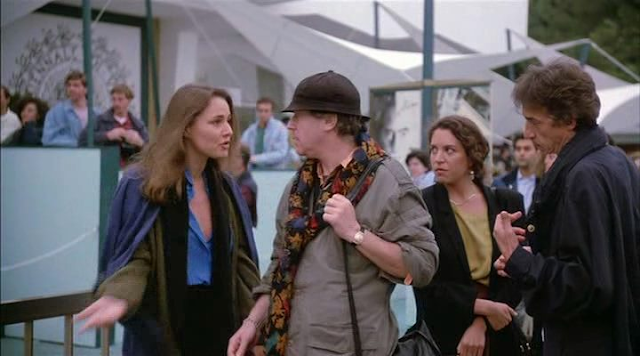 Interspersed throughout this tiny drama are testimonies from women (supposedly all acquaintances of Jaglom) about old movies, romance, and love. Their declarations are sort of cliched and basic desires and wants that they now seem jaded about--nothing comes off as particularly surprising. But the women, staring directly into the camera, in front of a window frame painted puce-pink to match its puce-pink blinds, with their on-the-brink-of-the-1990s styled hair, make-up, and clothing, are a haunting chorus throughout. The movie itself also plays with perception--at one point a table of the actors looks directly at us, in coy proclamation of the falsities of film. The editing feels purposefully rough-hewn and off (are the eyelines matching? does it matter?). Later, there's a pretty amusingly self-indulgent sequence where Dean has a bunch of actresses "audition" as a group for a role to play his wife. The gall, the nerve of him (!), and the perversity of watching these actresses unload. Physics, something that Jeanne has studied, comes into play as a means of locales, chance, and existence. This is a gem of a film, with striking performances, and lots and lots of smartish talking--in that rhythmic, off-the-cuff way that can be so beguiling, well... at least for myself. ***

Posted by MrJeffery at 2:16 PM