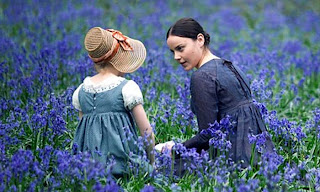 In Wislawa Szymborska's Nobel Lecture, "The Poet and the World," she remarks that the work of poets is "hopelessly unphotogenic." Jane Campion's Bright Star

is an exception: an exceptional movie about poetry and the passionate romance between John Keats and Fanny Brawne. Campion successfully showed the life of another poet Janet Frame in Angel at My Table

and brought a modern perspective to The Portrait of a Lady,

an underrated adaptation of Henry James.

The focus in Bright Star

is appropriately much tighter than Campion's previous work, resisting autobiography or much back-story. The story immediately plunges into the passion of Brawne and Keats with its tragic results.

It is a breakthrough performance for Australian actress Abbie Cornish as Fanny. Throughout the film, she is vibrant, alive and in-love to the point of sickness. Her final scenes, including an incredibly raw breakdown, are haunting. She is well-matched by the sinewy and handsome Ben Whishaw (who was quite good as Sebastian in Brideshead Revisited

). Their romantic chemistry is often palpable. The intensity can be attributed to Campion's restraint. Sure, there are butterflies flitting about and stolen kisses under canopies, but the film is also grounded in the darker aspects of the human heart.

is lensed lovingly by Greig Fraser and the score by Mark Bradshaw is never overpowering. The film is a respectful ode to the work of Keats, including his process of writing and his modest influence on literature at the time (he ended up, of course, being an immense posthumous influence for many), without drowning in what could have been both maudlin and saccharine. ***1/2


The love letters and poems by Keats are available in book form here.