the fun about fear - a guest post by karen g. 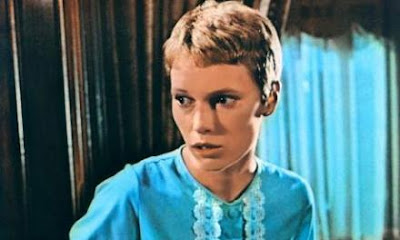 Here’s to those prickly beads of sweat on your brow. That uncomfortable feeling of weightlessness in the pit of your stomach. A jolt in your seat as you grab whomever might be next to you. A wave of mild nausea and sometimes even a tiny yelp or muffled scream.

I’m talking about good old-fashioned scares in our favorite horror movies, and those moments of addictive discomfort that just keep us going back for more. Yes, The Exorcist and The Shining are definitely in the top 10, but here are a few others that deserve a mention.

While extremely campy and laughable at times, there were some pretty creepy scenes in this Sam Raimi classic!

I remember the sound effects in this movie and build-up to the actual monster being more terrifying that the monster itself (although Giger’s “alien” left us all in awe once revealed) Truly one of the best written “suspense sci-fi horrors” I’ve seen.

I remember my older sister returning from the movies, pale-faced, after seeing this in 1984. I was too young at the time so my mother wouldn’t let me go to the movies to see it. I sat on the edge of my bed that night as my sister retold the tale of the burnt man with “knives for hands” who terrorized teenagers in their dreams. That night, with only the creepy trailers that were on TV at the time in my head, and the story my sister told me, I didn’t slept a wink. I lay there, trembling in my bed and praying that Freddy wouldn’t come for me.

Romantic moonlight skinny-dipping in the ocean would never be the same again. The opening scene to one of my top 5 favorite movies changed the world for night-time swimmers and surfers forever.

Honorable mention. The first movie in decades that made me squirm in my seat. So refreshing to watch a horror movie that had all the elements to make it an instant classic.

Event Horizon (1997)
The tale of the ship that went to hell and back took audiences by surprise at the sheer creepiness of what those black holes in space might really be about. This movie should get the “Endless Disturbing Visuals” award of the ‘90s.

The actual news stories and newspaper clippings about the strange murders and occurrences in this house is what makes this movie even more intriguing and disturbing to watch. Laced with facts and now legends, the Amityville Horror stands out as one of the most notorious stories of an actual haunting that drove a family to leave their possessions and run for their lives.

I still have moments where I’m afraid to look out of my window at night and see a white-masked maniac calmly standing outside looking up at me.

There’s a reason people don’t like clowns. A mini-series based on a novel by Stephen King had children crying at bath time for years! Even today, the thought of a sadistic clown living in the sewers in rather unsettling.

If you’ve ever had the thought that you might look into your baby’s crib for the first time and recoil in horror, I’m sure you have this movie to thank.