Lars Von Trier films often thwart and redefine aspects of aesthetic beauty. The blue planet romantically called 'Melancholia' in his latest picture is both a sensuous vision and an apocalyptic terror. His twinned story follows Kristen Dunst as glum newlywed Justine and her sister Claire (Charlotte Gainsbourg).  Set in a rambling, remote castle of Claire and her husband John (Kiefer Sutherland), Justine awkwardly flits in and out of her reception in a stuffy white wedding gown and in a slew of events, loses both her job as an art director and her simplistic new husband (Alexander Skarsgård).  The second act focuses upon an unnerved Claire trying to take care of her depressed sister.  As Melancholia approaches Earth (evocatively photographed in the film's sans dialogue opening sequence), Claire becomes more and more rattled by the prospect of the extinction of life while Justine calmly waits it out. 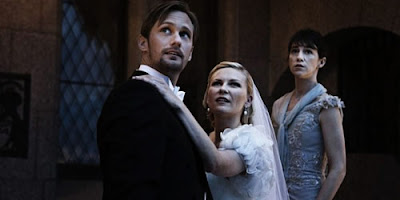 At times creaky, Von Trier frustratingly purges many of his exposition's interesting plot lines and characters (including Charlotte Rampling as Justine and Claire's mother who rants against marriage) and centers upon the psychological fears of earthy Claire and the nihilistic Justine (similar, it seems, to the collision of the two planets).  Gainsbourg is the dramatic anchor the film needs.  While no one comforts her, including her cold husband, she sympathetically tries to ease her sister.  Horseback rides in the fog, a favorite dish of meatloaf ("it tastes like ashes") don't please Justine for very long. In a complicated performance, Dunst oscillates between downbeat grief and a sort of determined and confident anger ("The earth is evil.  We don't need to grieve for it," she bluntly intones to her sister).  Von Trier has said of her character: “She is longing for something of true value. And true values entail suffering. That’s the way we think. All in all, we tend to view melancholia as more true. We prefer music and art to contain a touch of melancholia. So melancholia in itself is a value. Unhappy and unrequited love is more romantic than happy love. For we don’t think that’s completely real, do we?”  Von Trier's handheld cam doesn't linger too much on the beauty of his actors or the picaresque setting (something out of a Vogue shoot; the golden-hued bridal bash appropriate for Vanity Fair) or the castle's crown molding.  The proceedings are even backed by Wagner's grand Tristan and Isolde overture.  But Von Trier isn't one for lush comfort, in effect, he annihilates it. ***