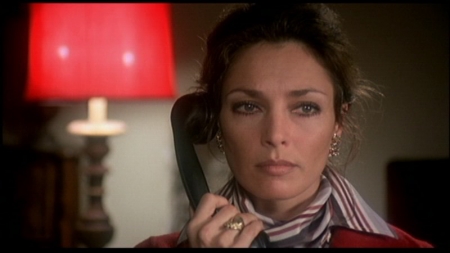 The films of Lucio Fulci vary in content and how gory they are (The New York Ripper is one grimy shocker that pushes the graphic limit about as far horror can go).  Though few of his films are as polished or sophisticated as Dario Argento's (whom Fulci often voiced personal contempt for) giallos, Fulci definitely has a distinct style. His 1977 The Psychic (aka Seven Notes in Black) is one of his more under-seen films.  It centers upon a woman (Jennifer O'Neill, another one of Fulci's ravishing but emotionally distant leads) renovating a villa.  She begins to piece together a mystery through her violent psychic visions.  It sounds a bit like Eyes of Laura Mars, but Fulci's film predates the glossy Faye Dunaway flick and it's a bit more subtle and eerier, though undermined by schlocky dubbing.  Cinema afficiandos may catch that Quentin Tarantino lifted portions of its music score (by Franco Bixio, Fabio Frizzi, Vince Tempera) for Kill Bill, Vol. 1. **1/2

I actually enjoyed his Manhattan Baby more than I thought I would (it usually appears on his worst-of list).  A wealthy Manhattan family's trip to Egypt unearths an evil spirit within a necklace that the young daughter is given.  Fulci's film isn't nearly as intense as its inspirations (namely Exorcist and Rosemary's Baby) but it finds a groove in its dream logic. Part of the reason why it works is that it seems to have fun in its referencing; note that one of the kids and the doomed au pair are named after a character and the lead from Halloween (Tommy and Jamie Lee).  There's even an unsettling scene right out of The Birds, this time with swooping killer stuffed ones, that is flamboyantly filmed and edited.  It's pretty tepid plot-wise and takes too long to get going, but I reveled in its late-70s, early 80s Manhattan-set cheesy horror vibe. **1/2 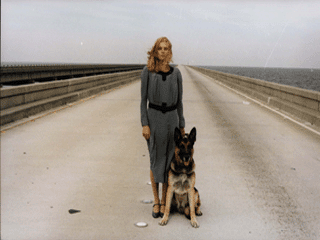 Most thrill-seekers consider The Beyond Fulci's masterpiece.  In this blood-soaked, New Orleans-set fever dream, a young woman is also doing some renovating -- this time at a haunted inn which houses a portal to hell.  It's familiar territory for Fulci but The Beyond is especially gory in its death sequences. These violent scenes, including one with flesh-eating tarantulas, in which I had to cover my eyes, are almost-agonizingly long. The Beyond has some arresting visuals, including an eerie moment set on the Lake Pontchartrain Causeway.  There is something about the highly stylized nature and the gruesome pitch of Fulci's death scenes, which mixes shock and black humor, that is pretty much unparalleled in horror. Many have wondered if Fulci's sad past (his wife committed suicide and years later, his daughter died in a car wreck), have shaped his artistic vision and the relentless cruelty that's afflicted upon his characters.  Even if the films can have shoddy production values, their garishness and viciousness still can pack a punch and haunt the viewer afterward. ***