storyboard: a visual journey through 'skin shift' by matthew hittinger 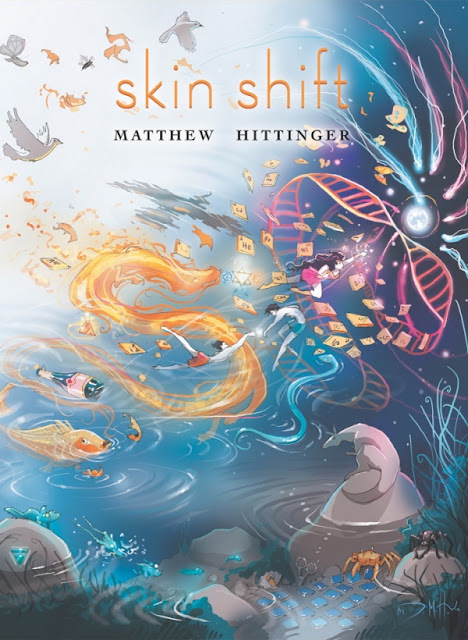 Here, Matthew Hittinger discusses his relationship to visual art and the poems within his excellent new book Skin Shift. 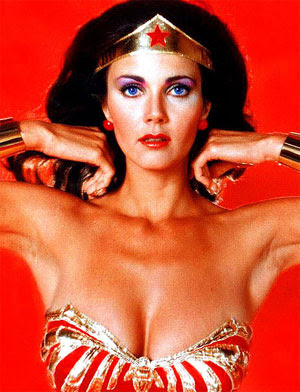 When I write I often make a "storyboard" of visual clippings up on my bulletin board, a collage of all the visual references that inspire me.  There were many for Skin Shift and I have selected seven to discuss in more detail below, but there are so many others, such as images of ravens (one is a postcard I picked up in Ireland in the late 90s, of a 1984 painting by Basil Blackshaw called Riot Act) and wolves and tattoos, of Wonder Woman and Houdini.  At the moment the bulletin board is a shrine to Marilyn Monroe as I come off my Marilyn project.  I find it useful to live with the imagery my imagination is working its way through, to have it up and always present in my waking life.  And often those images find their way into the Dreaming as well. 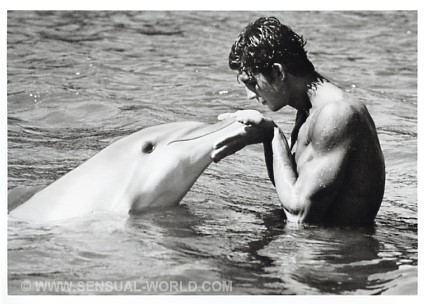 I have a postcard of the photograph Nestor and Dolphin, Florida Keys, 1990 by Niels Coogan that has alternately been part of a collage on a bulletin board above my desk and has lived in the front fly-leaf of my notebooks for years now.  When I learned of the pink river dolphins of the Amazon and the legend that they turn to men on the full moon, I knew I wanted to queer the story and make it a magical sexual encounter between a male animal scientist hunting the dolphins and the transformed river dolphin man. That tender moment between the dolphin and hot man depicted in the photo was always in the back of my mind as I worked on this poem. 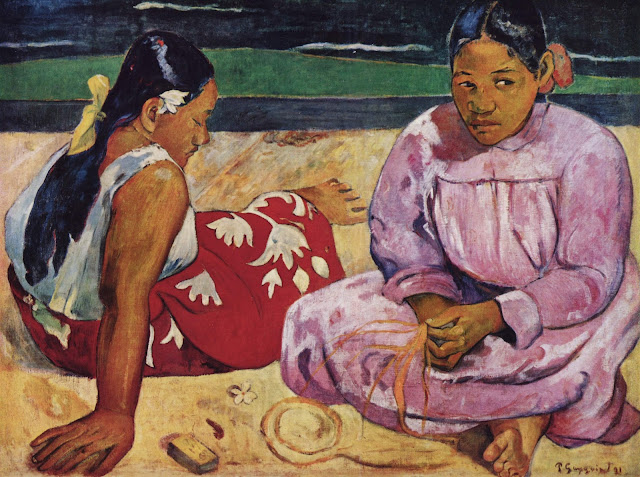 Paul Gauguin's a complicated character for me.  I studied quite a bit of Post-colonial lit in college and wrote a paper on Gauguin for a Modern Art class.  Reading his journals, Noa Noa, from his time in the South Seas you come up against all the problematic language of the European artist's obsession with what they call the "primitive" (we see this with Picasso and those African art masks).  I was drawn to this painting for its color and drama and all the questions it raised the more I looked at it: who are these girls? what is their relationship to each other? to the male viewer who is painting and gazing at them? what is the significance of the objects Gauguin's decided to include? It's probably the most ekphrastic poem in the book and I included it to "flesh out" the exploration of skin some of these poems undertake. 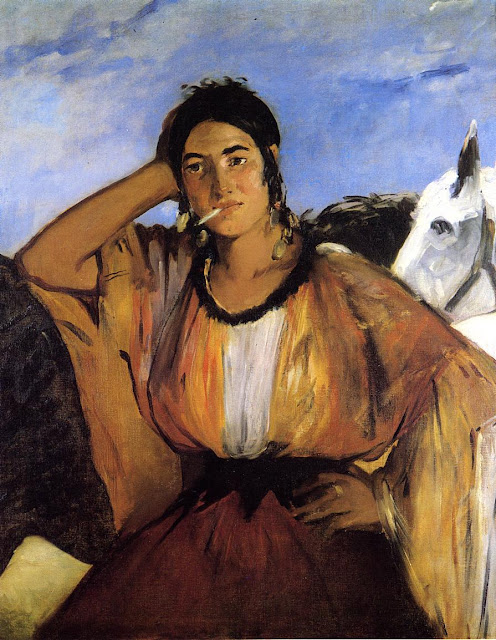 One of the inspirations for this poem was this painting by Edouard Manet, Gypsy with a Cigarette (oil on canvas, 1862).  I've had a life-long obsession with the Romany, and they often pop-up in my imagination and work. There's a reference elsewhere in the book--in the poem "Substitutions"--about my mother and the family legend about her being swapped with a Romany baby when my grandfather allowed a traveling band to stay on his land.  As you know, I love the dramatic monologue form, and the woman in this painting is the speaker of this poem. 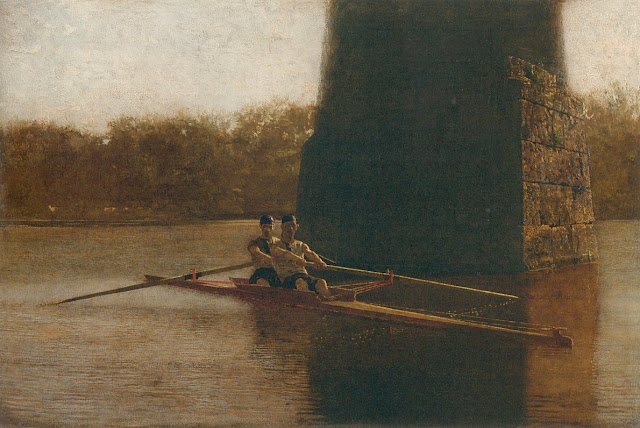 This little tanka was inspired by Thomas Eakins' painting The Pair-Oared Shell (oil on canvas, 1872).  I'm a huge fan of Eakins' work, especially his depictions of the male body in physical action.  I wrote this poem in the early 2000s. My boyfriend at the time lived in Philly for a year; I also grew up about an hour north of Philly, so its landscape and the Susquehanna rowers are a familiar sight to me.  It's a bit of a love poem.

There are a number of references in this sequence to famous depictions of Narcissus, both literary and visual.  Here are three of the visual sources: 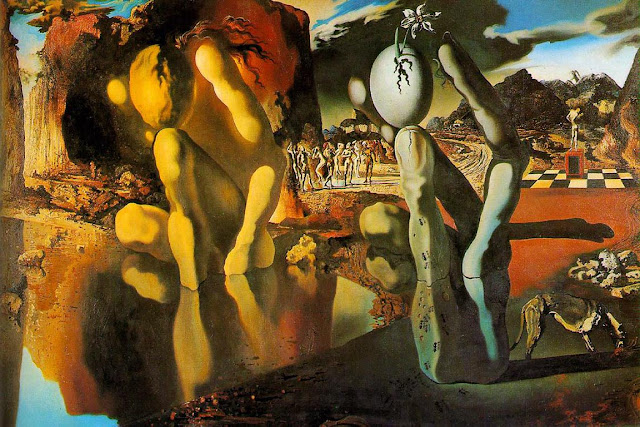 Salvador Dali's painting Metamorphosis of Narcissus (oil on canvas, 1937).  The five sections with the same title break-up the "Narcissus Resists" sequence with ekphrastic meditations on the painting, almost acting as chapters as I take a reader on a journey through Dali's imagery to get at the elusive Narcissus character.  I felt the tone of these meditations helped break up the more narrative tone of the corona, and provided a counterpoint and kaleidoscope to this investigation and reclamation of a proto-queer myth. 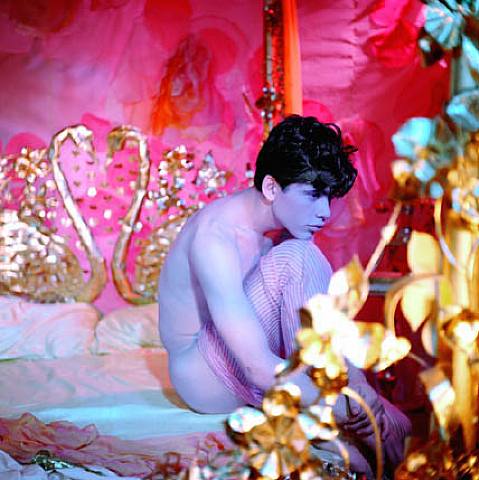 A still from James Bidgood's 1971 film Pink Narcissus, which is referenced in the "Celluloid" sonnet.  In cataloging all the images of Narcissus I was drawn to the modern interpretations of him as I sought to examine our obsession with surface beauty and exorcise some of my own demons on the subject.  I was retelling the tale as a technology myth and wanted our modern inventions to feature prominently throughout, from film to TV to the internet, all the trappings of visual culture. 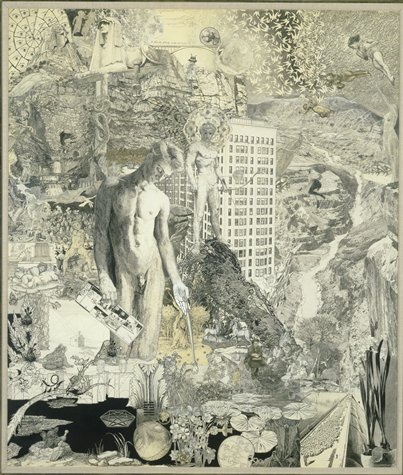 The fabulous collage by Jess, Narkissos (graphite on paper and collage paste-up) which he started in 1976 and finished in 1991.  I first saw it at SFMOMA back in March 2005 when I was visiting friends in San Francisco and couldn’t tear myself away, transfixed on all the glorious detail and resonance with my own interpretation of the Narcissus story.  I knew I had to reference the image in some way and found it worked well in the end lines of the “Concomitant” section where I conflate the image of Narcissus and Apollo depicted here, turning Narkissos into the sun god for a brief moment.


-Matthew Hittinger
Posted by MrJeffery at 9:19 AM