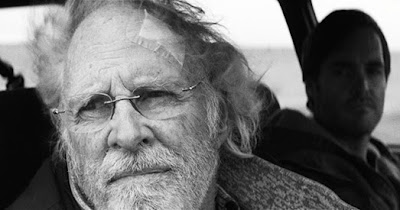 The first time I had seen Bruce Dern in a movie was in a vigorous run in Coming Home, those feet hitting the track to the music of the Rolling Stones, ironically placed. He was a powerhouse in that, as a Vietnam vet, driven to anger by his experiences in the War. Thirty-five years later, he is now 77 and a melancholy, exquisite centerpiece in Nebraska. Woody Grant (Dern) and his son David's (Will Forte) Subaru wagon trip from Billings, Montana to Cornhuskers Marketing in Omaha to claim Woody's one million dollar prize (bogus or not, you'll have to wait 'til the end to find out) is made unforgettable by their detour to Woody's hometown in the small farming community of Hawthorne, Nebraska.

With similarities to his About Schmidt, Alexander Payne (Election, Sideways, The Descendants) has made a very tender film, probably his most soft-hearted, but still rife with his signature dry humor and a bitter edge. This is best personified by Woody's wife Kate (June Squibb), a foul-mouthed straight-shooter, who provides much of the movie's laughs. It could have been sort of a Betty White-shtick, but Squibb inhabits the character carefully as she praises and stings. Her cemetery monologue is a highlight.  Some of the movie's jokes were flat and corny (no pun intended) but Bob Nelson's script (impressive debut) overall is richly written, with subtleties and specific details and imagery that unlock key characterizations for us and for David. "SNL"-alum Forte, forlorn in a plaid shirt, is completely believable. Nobody has to say that the relationships between David's family feels a bit broken or that David's stint as a speaker system salesman is likely soon-to-be-obsolete because Forte shows us his regret and resignation.  At the center of this is the very quiet Dern, eyes large behind glasses, wisp of white hair, in an ill-fitting parka with a boozy, jagged, lumbering gait.  He is indeed marvelous in the role which requires more subtle expression and physicality than dialogue. Another exceptionally casted Payne film, also good in bit parts are Stacy Keach as a morally questionable former business partner and a radiant, present Angela McEwan as an old flame.  The black and white photography by Phedon Papamichael (not to mention the unique use of the old Paramount logo and the main titles of a black screen with simple white credits spread across the screen) gives the movie a timeless feel. The wonderful tuneful score of folk and trumpet rounds is by Mark Orton--completely fitting and adding to the film's tone and feel. Nebraskan native Payne takes his sweet time all building to a repentant, affecting, sentimental last ride.  ***1/2

Posted by MrJeffery at 2:38 PM