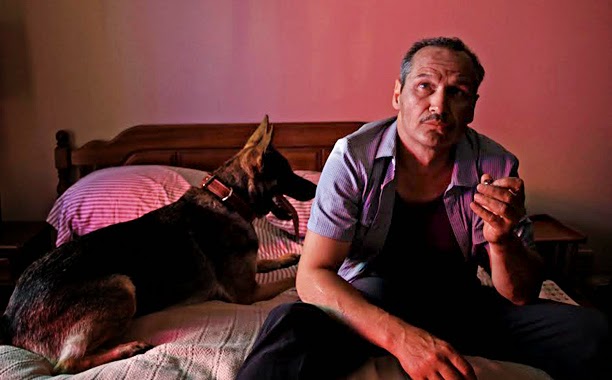 In Late Phases, the brusque, no-nonsense actor Nick Damici is superb as blind, cranky Vietnam vet Ambrose who moves into a seemingly serene gated retirement community on the edge of the wood to live out his final days alone with his dog. His handgun and imposing nature immediately makes his new neighbors unsettled--notably a trio of gossipy ladies. Yet the real horror in the zone is a werewolf that appears every full moon to stalk and kill the residents of Crescent Bay.

Directed by Adrián García Bogliano (his first English-language picture), Late Phases is filmed with a buttery pallor by cinematographer Ernesto Herrera. It's mostly a serious film about a tenuous relationship between father and son (a forlorn-faced Ethan Embry) and the struggles with faith and mortality of society's throwaways (vets, the disabled and the elderly). But also in the mix are the werewolves, designed with mostly (thankfully) practical effects--reminiscent somewhat of Joe Dante's The Howling--falling somewhere between goofy and menacing. Despite a bloody grand finale, those on the hunt for a straight up werewolf fright flick might be disappointed as Late Phases is mostly a somber affair on the big questions studded with occasional dry riffs from Damici (looking a bit Paul Newman-esque in his shades). The film is a little a bit inert but it helps that the cast (which includes retro-TV and movie faves like Tina Louise, Karen Lynn Gorney and Lance Guest) is so offbeat and engaging, especially the always-interesting Tom Noonan as the hazy, chain-smoking town Priest. Late Phases is also bolstered by a rich score by Wojciech Golczewski that recalls old fashioned monster movies. At its best, the film is reminiscent of an entry from "Tales from the Darkside"--highlighting the sinister nature of ordinary human interactions in a tranquil setting.  ***

Posted by MrJeffery at 3:09 PM