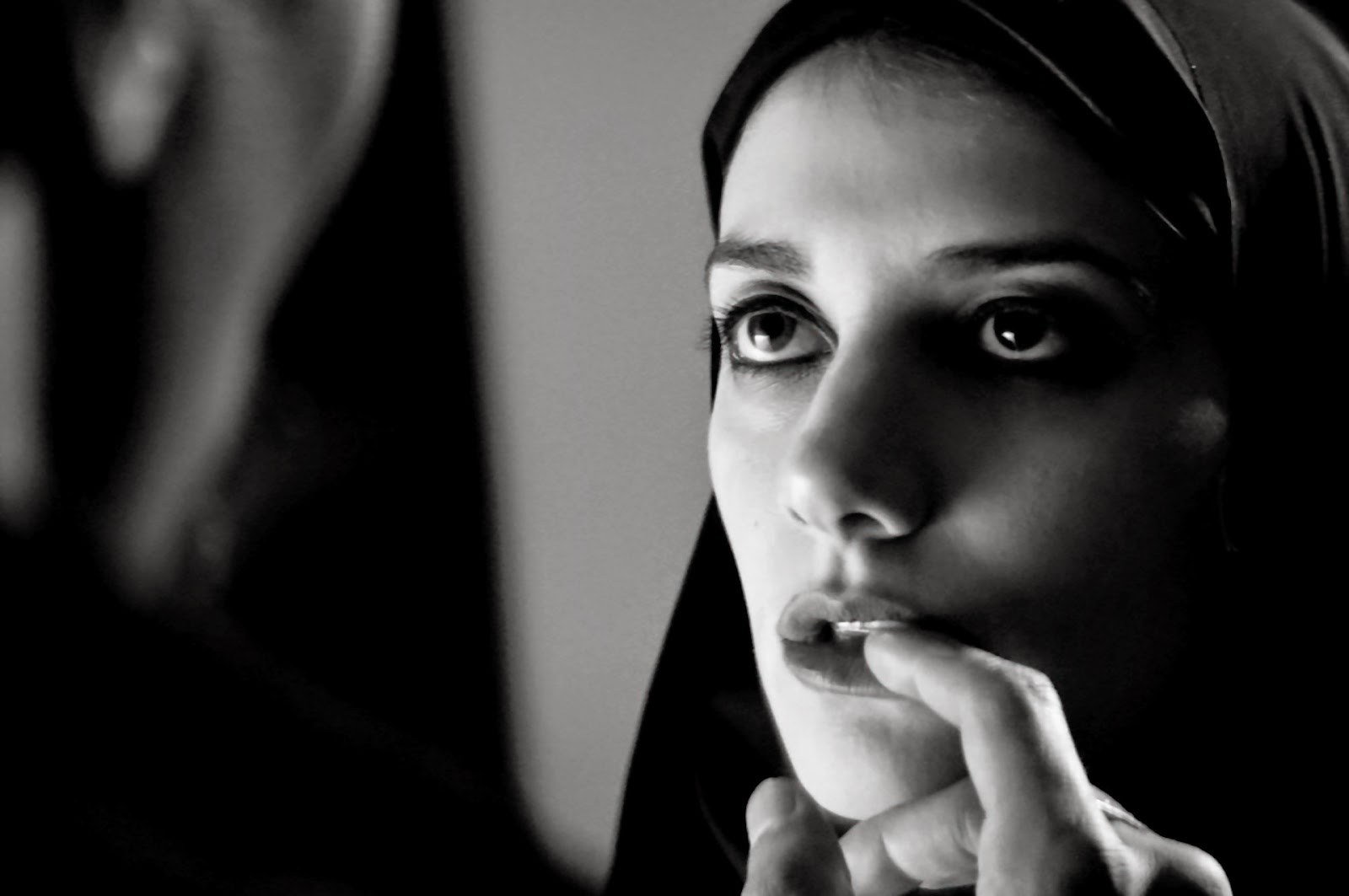 The eerie landscape of squat housing and dreary factories in Ana Lily Amirpour's daunting and gorgeous vampire flick A Girl Walks Home Alone at Night is a bit Antonioni (particularly Red Desert), a bit spaghetti western. Amirpour notes, "I wanted to make an Iranian film, but the question was how? Since I obviously can't shoot in Iran, the solution became the invention of the entire film; I found a desolate, vacant oil town in the desert of California which became the fictitious Iranian ghost-town Bad City, and suddenly there were no rules. I created my own universe, and made the rules." Bad City (a homage, perhaps, to another misfit tale Badlands) is quite an unforgettable place with its empty alleys, sidewalks and roads, howling winds and glowing streetlamps, occasionally rumbling trains, and an unexplained pit of dead bodies. Within the town is a mysterious young woman, simply known as "The Girl" (a beguiling Sheila Vand), haunting the bare streets in a flowy chador. Also there is the white T-shirt and denim-clad "Persian James Dean" (Arash Marandi) who lives with his widowed, drug-addicted father (Marshall Manesh). The few townspeople we meet are marginalized and lonesome, yearning intensely in a town that is marginalized in itself.

The keenly designed but never too on-the-nose interiors (production design by Sergio De La Vega; art direction by Sam Kramer) give insight into character--from the cheesy "Miami Vice" and fish tanked pad of the terribly tattooed (Pac Man and SEX et al) buffoon "Pimp" (Dominic Rains), the curtained ramshackle apartment with its poignant map of the world on the wall of "The Prostitute" (Mozhan Marnòto) to "The Girl's" disco-balled Bee Gees, Prince and other retro icon-walled room (I was intensely staring at a Madonna-inspired poster, trying to figure out who it was... turns out it's Margaret Atwood!). Like that poster, Amirpour's work seems to embrace an array of influences from filmmakers (David Lynch, Sergio Leone, maybe even Kathryn Bigelow, especially Near Dark), storytellers and also pop videos (Amirpour herself is a musician). I recognized many nods to other movies throughout including Jim Jarmusch's Dead Man. Coincidentally, Jarmusch released his own moody vampire flick this year--the ballyhooed Only Lovers Left Alive. It turns out that Amirpour's film is the more impressive one--definitely much more strange, electric and seductive, especially because of the remarkable cinematography by Lyle Vincent. Sure anamorphic black and white usually automatically looks alluring on film, but there is much more to Vincent's work--the unusual perspectives (loved the straight-on shot of the downward hill and a shots of a fork grazing over egg yolk), careful lighting and character positioning. There are miraculous accidents of some humorous feline reactions. The pacing is a bit languid and at times I thought the film moved a little too slow (I have grown a bit weary from the 2010s arthouse trend of staring, stoic characters) but the images Amirpour and Vincent capture are occasionally breathtaking. The soundtrack too is incredibly vivid and well-timed--a stellar, Tarantino-esque bevy of haunting oddities (hopefully they will be available together soon!). According to Amirpour, "the soundtrack was very much a part of the design of the film, at the script level. Each song you hear was picked in advance, and the power of music is so massive that it leads the way in the filmmaking." It will indeed be exciting to see the gifted Amirpour lead the way for a new generation of filmmakers. ***1/2