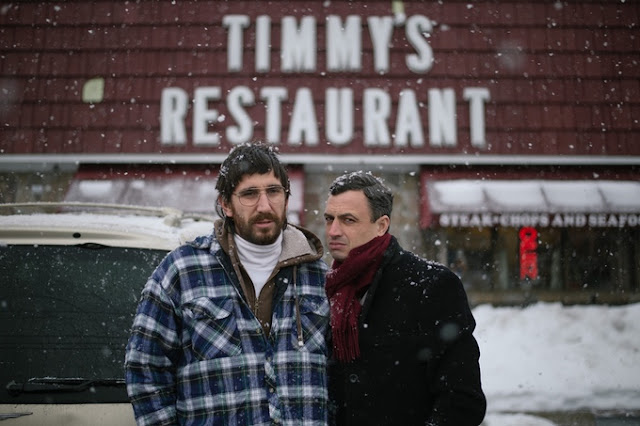 Set in snow-covered Warwick, Rhode Island, Donald Cried is a darkly comic piece of an old friendship awkwardly re-lit. Donned in over-sized glasses and with a greasy mop of chopped-short-banged hair, the kooky, loquacious, spontaneously rude Donald (played winningly by the film's Writer / Director Kristopher Avedisian) has a way of insulting people and putting people at unease through storytelling. Having to listen to these windy, winding tales and having a need for cash (after his grandmother's death) is why Donald's former childhood friend Peter (Jesse Wakeman) sticks around longer than he had hoped for. Donald is a "heartfelt mix-up" living in a room of KISS dolls wallpapered with explicit posters of women and movie posters like one for 1979's Prophecy. Described as "former metal-heads," Donald seems stuck in his past while blu-toothy Peter has unhappily moved on to a stint as a Manhattan banker. A run-in with a former student in a greasy spoon is a one of many of the film's finely-tuned yet naturalistic moments. The drab, wood-paneled sets and the photography (by Sam Fleischner) create an atmosphere of dull malaise in colors of gray, maroon, plum, and washed-out blue, The snow too (the film begins on a narrow road within the walls of plowed snow) adds to the feeling of stuck-ness. Avedisian's first full-length recalls the sorrow and the pity of Miguel Arteta and Mike White's Chuck & Buck. Also, the use of Milli Vanilli is always welcome. ***