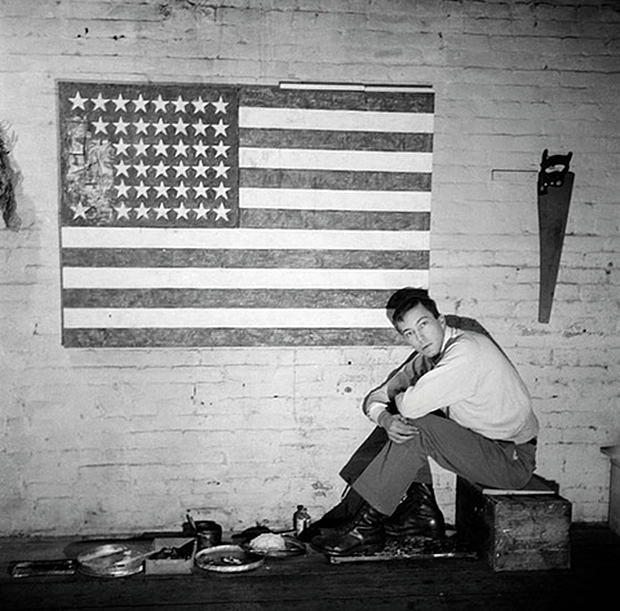 “Flag is covered with a lush array of drips and fleshy brushstrokes, initially confirming Johns’s kinship with mid-century American painting. Yet Johns’s motif and technique tell a different story – one of endings and beginnings, and the passage that comes in between. Begun in the fashionable medium of oil-based enamel paint, Flag was completed using the anachronistic medium of encaustic in which pigment is mixed with hot wax and, in Flag’s case, strips of newspaper and fabric to which the coloured encaustic adhered. As Johns explained it, encaustic allowed him to be more efficient and, at the same time, more deliberate in his gestures. In other words, because pigmented wax sets quickly, Johns could add another mark or strip of saturated paper or cloth with the assurance that any previously laid marks would remain unaffected. In this way, each discrete trace was preserved, effectively embalmed." 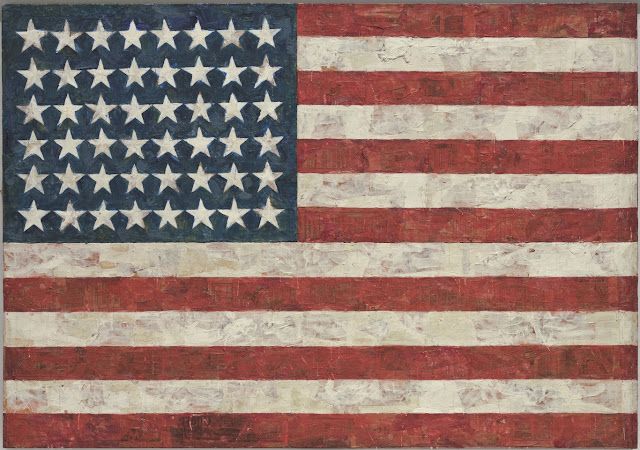 "Long out of favour and largely forgotten, encaustic was an ancient technique most closely associated with a group of remarkable Egyptian funerary portraits. Affixed to the deceased’s mummy prior to burial, these highly realistic portraits from the second century were designed to preserve the image of the dead, just as Flag and its ghostly white pendant White Flag, preserved aspects of contemporary American painting at the very moment when Johns was laying to rest various aspects of this moribund tradition. A pivotal object within the history of modern American art, Flag was a beginning for Johns, but for Abstract Expressionism it was also the beginning of the end. For in the paintings that followed Johns’s dramatic debut, this audacious newcomer systematically challenged every aspect of mid-century painting, beginning with the tactile brushstrokes that are arrested in Flag."

Posted by MrJeffery at 8:54 AM