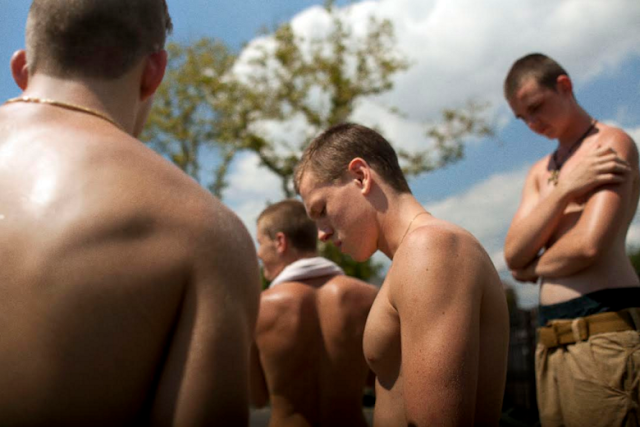 In watching Eliza Hittman's melancholy new film Beach Rats, I was strangely reminded of 1977's Saturday Night Fever. Both are character studies within tiny social circles of lower middle class exaggerated Brooklyn-bred machismo--featuring drifting, self-destructive male protagonists. Yet the contrasts between the eras they depict and in which the films have been realized are stark. In John Badham's work, there's a sense of glee and release in its tuneful slate of Bee Gees anthems and its fervent, almost religious view of disco dancing upon a lit-up rectangular dance floor akin to a throbbing stained glass window. The story and its characters may be sad and distressed but they live within widescreen shots of energy, fog-machine clouded orange-red light, and choreography that feels both slick and carefree. In Hittman's piece, the camera catches things very close (Hélène Louvart, who has worked with luminaries such as Wim Wenders and Agnès Varda, is the cinematographer) in shaky 16mm with a paleness and graininess like our lead character's (Harris Dickinson) freckled countenance. The most fun to be had is stationary and aimless, through hoops of hookah smoke, in bro-ish, boring games of handball, and a neon-lit boat party of plastic blue Solo cups, sweaty, hodgepodge bopping and grinding to garish dubstep. 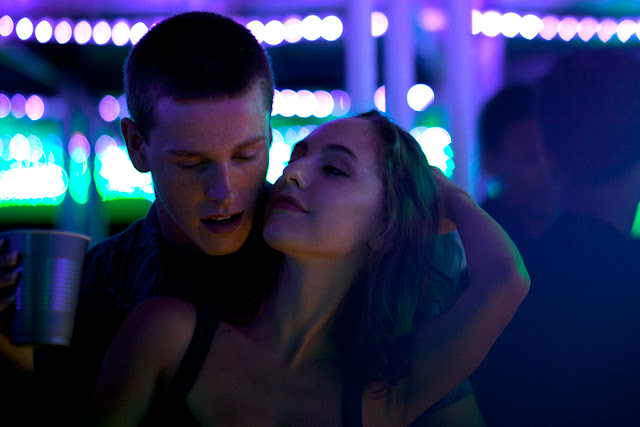 Rudderless within this claustrophobic world of monotony, is Frankie (Dickinson) who is dealing with his dying Dad, drug addiction, and a deeply repressed sexuality. He clicks into cam rooms in the wee hours and smokes and hooks up in beach shrubbery with older guys--to avoid being found out, he relays. By dating shop-girl Simone (Madeline Weinstein), Frankie tries to follow a more traditional path, similar to the way his sympathetic but dryly intuitive mother (Kate Hodge) met his father on a Coney Island boardwalk, but both soon realize the hopelessness of their relationship. "You're a fixer-upper," Simone says in one of the film's few funny lines, "I need newly renovated." His muscled, "beach rat" friends in their tanks and sagging basketball shorts don't offer much companionship and understanding besides ocean dips and attempts to score drugs and girls. 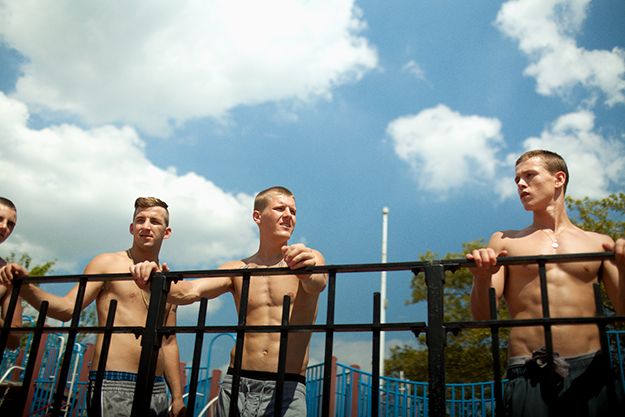 Frankie's dreary surroundings are lit with fireworks (the same old display, Frankie symbolically notes, over and over again) up in the night sky over the beaches of Brooklyn and on his computer screensaver; it's lit with glowing blunts, with glaring blurs of selfie flashes, and carnival lights. As he chats online with his select choices of men, Frankie dons a black ball cap, his pale face and blue eyes aglow from the computer screen. Slyly, the camera frames him at one point, up against a wall marked "Electric Closet." 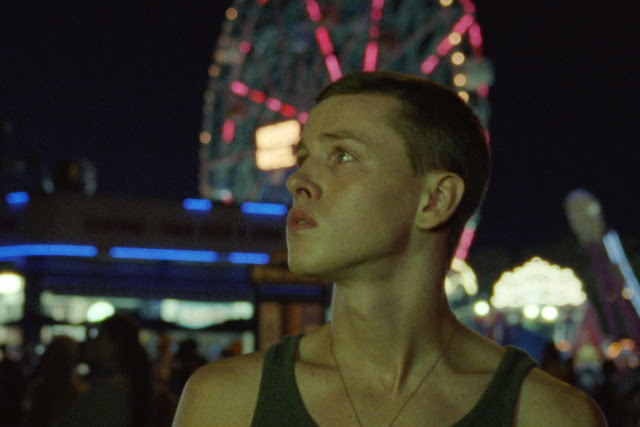 The film often keeps things at bay. I sometimes wondered how much surrounding characters, primarily the mother, really knew. The father's sickness and death is gently touched upon in the makeshift living room bed, his clothes rippling by a desk fan and in his family's shaky performance of a hymnal. But I wondered too if there were deeper ramifications, besides Frankie's prescription drug hook, that perhaps his father's absence gave Frankie room (a literal one to boot) to explore his sexuality. It could also be inferred that Frankie is seeking a father figure in these older hook-ups; his sexuality so stifled, he caresses a postcard of Jesus and can only quickly glimpse body parts of a train passenger (constriction is also a visual motif--in the passenger's tight jeans and a lingering shot of his mother's pantyhose). He is afraid of going outside of his world of shoreline and Avenue Z, perhaps because he fears the unknown, of being acutely defined as a new person and as a gay man. I could only imagine his dreary existence in winter doldrums. Hittman's direction and script allows a wavy mystery to the proceedings. Even if the story and plot turns are straightforward and rarely surprising, the character studying is very detailed and absorbing. ***

Posted by MrJeffery at 8:02 PM