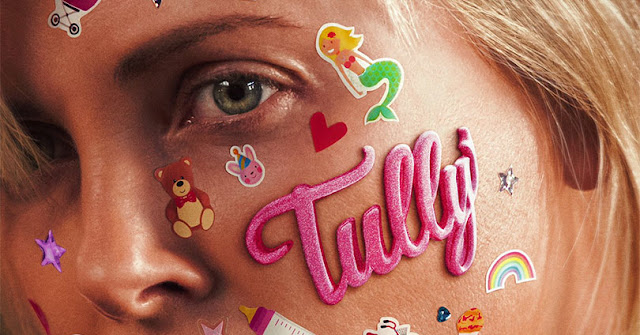 With Young Adult, Director Jason Reitman, screenwriter Diablo Cody and actress Charlize Theron proved a powerful trio in enacting a sharply comic, delicately constructed, and deeply conflicted character study. Their Tully reunion proves just as brazen and intimate. Marlo (Theron in another raw, lived-in turn) has just delivered her third child, and is grappling with the sleepless energies of taking care of her and the needs of her other two. She has minimal support from husband Drew (Jay Livingston) who's off working most days and playing video games with a headset on. It's somewhat disarming to see the relationship itself not be the central conflict; the picture is more interested in Marlo's inner turmoil. When her new "night nanny" Tully (effectively portrayed by Mackenzie Davis) appears on her front doorstep, the film seems to be moving toward Marlo's rebirth with the help of Tully and Marlo's own state of mind. "What's wrong with your body?" Marlo's young daughter probes. The movie doesn't fall for the cutesy pratfalls of most mommy comedies.

Cody's vivid dialogue, peppered with details and slyly spun metaphors, and the structure of the movie itself, wrestles more with how motherhood can inflict a physical and emotional toll on the mother. The movie goes deep into this, so deep, we feel as if we are sinking within the drab, darkly-lit settings and the dreamy water imagery. The soundwork and Stefan Grube's impressive editing create the jagged rhythms of Marlo's life and also enhance the details of Reitman and Cody such as in punctuating the surreal absurdness of both children's television and trashy adult reality shows like "Gigolos." When we watch Marlo and Tully drive back to Marlo's early twentysomething Bushwick party days, with a chopped-up blitz of Cyndi Lauper's She's So Unusual setting the scenes, I felt a sense of Scorsese's dreamworld logic in After Hours, where what should be a satisfying release, becomes instead a frustrating, unfulfilling night-out. In the haze, the film ultimately finds its satisfying, tender, full-circle note between mother and son. ***

Posted by MrJeffery at 5:19 AM