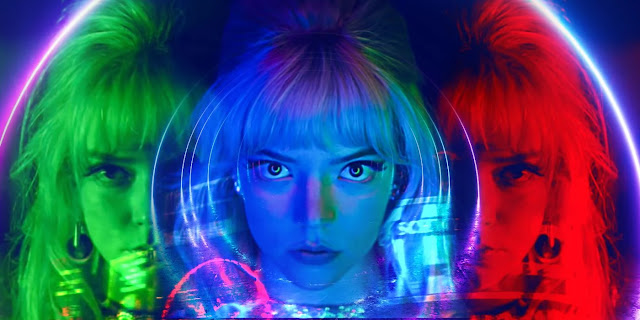 Please lock me away / And don't allow the day / Here inside where I hide / With my loneliness are the opening lyrics, written by Paul McCartney (and attributed to Lennon-McCartney) to Peter and Gordon's lilting hit 1964 ditty "A World Without Love" which glosses over the appealing main title sequence (more narrative main title sequences in contemporary movies please!) of Edgar Wright's messy, overwrought, occasionally smashing Last Night in Soho. Our protagonist, Eloise "Ellie" Turner (played by Thomasin McKenzie), waltzes through her room to the song with a newspaper dress (a very literal representation of "yesterday's news") she designed herself, imagining her life has a designer. Wright packs a lot for this character in a few moments: the dreamy Eloise stuck in the nostalgia of the swinging 60s, a deceased mother who appears in mirrors (Aimee Cassettari), and a glowing grandmother (Rita Tushingham) who has raised Ellie and has been supportive of her ambitions.

Quickly, after receiving her acceptance letter, we watch Ellie trot out of the doldrums of the countryside to attend fashion school in London. It's here, the shy, introverted Ellie is thrown into a large pond, meeting snotty roommate, Jocasta (Synnøve Karlsen) and a warm, friendly schoolmate, John (Michael Ajao), who shows attraction towards her. Wanting to break free of her dorms, she moves out to the top floor of a run-down flat in the Soho district, run by a craggy landlady (the iconic Diana Rigg, in a memorable final performance). And here, Ellie is willingly and feverishly, locked up in her loneliness, up in this dreary room, and begins to sink into a dream-reality transporting her back to the music-soaked, neon-lit, dazzling Soho of the mid-1960s, where she becomes a body double of sorts of glam, blond-bobbed Sandie (Anya Taylor-Joy, particularly striking and distinctive in this role). Ellie's dreams are fanciful and exciting at first, but soon meld into nightmarish, destructive visions that rampantly plague her. 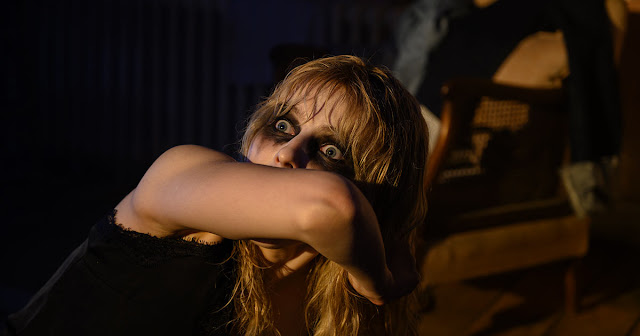 For those who sometimes are too attached nostalgic elements of the past (music, fashion, lifestyle), may find a certain joy and connection watching Ellie's predicament (the good and the bad). Through her ghostly visions, as Ellie uncovers the particularly rough treatment and torment by Sandie's male suitors, the idealized fairytale version of the 1960s is upended.

In some ways, Last Night in Soho, while fully embracing of the glam, fashions and tunes of the era (especially when contrasted with the drab, blandly corporatized present day), is a cautionary tale about getting "too lost" in the past. Interestingly, the early 60s-mid 60s British kitchen sink dramas which Wright's cast alludes to (Terence Stamp, Rigg, and Tushingham), showed an "alternate," grimier side of London-living, in stark contrast to the bubbly Bond, Beatles and Bacharach of its pop culture. Wright's actors, like the Sandie Shaw Eurovision earworm cheese suggests--which figures in a brilliantly-staged scene (where the wound-up picture also begins to snap in two and unfurl), are merely puppets on strings for this splashy carnival-esque world. McKenzie is an actress I've admired in her career so far, especially for minutiae in intimate dramas like Leave No Trace and Last Night is a big, old creaky movie she has to sail through. Maybe that feeling of "can she sustain getting through this giant movie?" works on a meta-level on both her as a character and her as a performer. That fusion ends up sort of working, and I'm glad to see McKenzie getting a more grandiose turn.

Per usual, Wright is able to meld infectious pop songs into the narrative, in ways that feel equally organic and snazzy. His ostentatious style does, however, go overboard, especially as it thunders towards its ponderous conclusion. Luckily, a breezy little coda ultimately helps lighten the lead. Many aspects in the more horror-centered second half are quite obvious, hokey and predictable, which would be fine, except here, they are fashioned to seem shocking. Those who like Brian De Palma movies may enjoy all the homages (those body doubles and mirrors; knife slashes; that white-fitted trench (the eye-catching costuming is by (Odile Dicks-Mireaux)--a similar silhouette as in Dressed to Kill... or even a bit like Judith O'Dea's get-up in George A. Romero's Night of the Living Dead (note, wriggling zombie ghosts will figure). There's, of course, with any of Wright's pictures, many popcorn movies referenced to chew on, but Wright certainly makes a singular vision realized with the framing (the film is shot with fervent flair by Chung-hoon Chung) and styling of Anya Taylor-Joy's look in particular--a compelling screen presence here for sure, and the perfect ghostly figure to haunt this picture. ***

Posted by MrJeffery at 2:45 PM