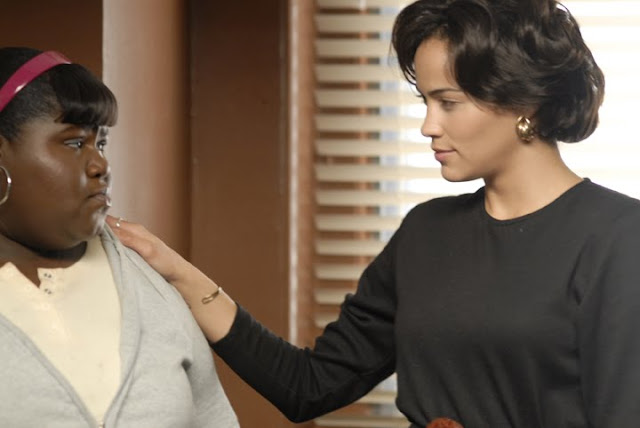 Precious is the girl some may laugh or gawk at or turn their eyes away from. Overweight, abused, illiterate, 16 and on her second baby (her father's), Sapphire gave her an utterly convincing and arresting voice in the 1995 novel Push

. In the captivating and ambitious new film adaptation by Lee Daniels, we are invited visually into Precious's harrowing story. Set in 1987, at the peak of the Reagan/Bush era and the AIDS crisis, it's a distinctly grim American tale of the marginalized but also a hopeful look at the strength of the human spirit. Shut out from learning at an overburdened and out-of-touch public school system, Precious is stuck in junior high, unable to rise above the second grade reading level. At home, she is sexually abused by her father (whose face is absent throughout the picture) and her mother (played with ferocity by Mo'Nique). When Precious is given the chance to attend a small vocational school for other female outcasts of the system, a teacher (an angelic but steely Paula Patton) named Blu Rain guides her out of illiteracy and into the world of self-expression through writing.

It's a stunning film and a difficult one to write about. There are few films like it. Melodramatic, raw and at times, funny, Precious

has a sort of European, lives-by-its own-rules flair. Daniels moves out of the horror of Precious's predicament into sequences of fantasy. These are skillfully but not smoothly done. In one scene, Precious looks at herself as a white girl in a mirror adorned with Cyndi Lauper cutouts. In another, Daniels puts Precious and her mother in Two Women

(the Italian Sophia Loren film about a mother and daughter who are raped). Some critics have seemed to have missed the meaning of this reference, assuming a poor black woman wouldn't be watching a subtitled film on television. All at once, Daniels suggests why not, maybe not, and who cares? The scene is funny and moving. These touches of the surreal made me think of other directors like Gus Van Sant, Truffaut and Bergman. And yet, why compare Lee Daniels to other white directors in order to "validate" his work? Here he proves that he is uniquely and bravely his own filmmaker.

Anyone who can pull such an unfussy, solid performance out of Mariah Carey certainly has a gift. Stripped of cosmetics and ditz, she is completely convincing in a small but pivotal role as a hardened social worker. Newcomer Gabourey Sidibe as Precious is a natural. She delivers poignant voice-overs, movements and expressions. But the standout really is Mo'Nique. The comedienne's devastating turn is worth the hype. Not only through her broad, operatic anger and emotional breakdowns but in more subtle ways as well. In a stunning scene, where she dons a wig and switches personalities to appease a social worker, we watch her character's desperation and cunning manipulation. Besides the principals, the whole cast is brilliant.

I wonder if my strong views of the film could be shaded by my film-going experience. A sold out showing Friday night at Lincoln Square, the crowd was thoroughly engaged and the response afterward, rapturous. This is rare nowadays for such a potent drama. I remember a gentleman once telling me about his experience watching Who's Afraid of Virginia Woolf?

in the theater in 1966 ("it was electric"). After the film, Lee Daniels graciously took to the mic to take questions. This will obviously be a huge hit (it already broke records for per-theater-weekend average) and so far, 2009's likely Best Picture winner. I hope this film will be groundbreaking in inspiring studios to finance black filmmakers. It may spurn much debate over race, social issues and character depictions (for this, please read insightful thoughts on Jezebel and Racialicious). But for now, I'm just happy to have witnessed such a great new American film. ****