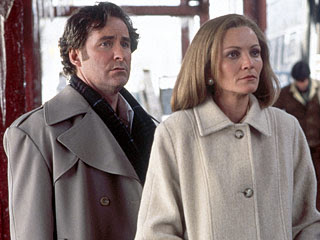 centers on two families in 1973 Connecticut suburbia. Ben Hood (Kevin Kline) is the father of bitter teen Wendy (Christina Ricci) and awkward prep schooler Paul (Tobey Maguire). Ben is cheating on his wife Elena (Joan Allen) with the droll and sultry next door neighbor Janey Carver (Sigourney Weaver). Janey and her husband George are distant from each other and from their two sons introspective Mikey (Elijah Wood) and gawky Sandy (Adam Hann-Byrd).

Released in 1997, a year before the Lewinsky scandal would shake up American ideas of morality and infidelity, and on the heels of the warm and supple Sense and Sensibility

was regarded as an oddity. It was shut out at the Oscars for a sweeping disaster picture that audiences identified much more with. In subsequent years, The Ice Storm

has gathered much more acclaim and was recently entered in the exclusive Criterion library. Looking back on it today and keeping in mind Lee's other great, near-flawless efforts (Crouching Tiger

among them), his versatility with subject matter and tone is rather astonishing. The Ice Storm

vividly re-creates an era on the edge of Nixon's resignation. There are some light touches in the self-awareness of the material. The early 1970s remains one of the most awkward eras in the American twentieth century. Some call the 1960s sexual revolution finally filtering into the suburbs a "trickle down effect." A student in Taiwan in the early 70s, Lee gives the film the feel of an outsider's point of view. Unlike the novel, the movie is less wrapped up in nostalgia or self-awareness. Before filming, Lee gave his cast cutouts of the time period. Unlike other films portraying the 70s, the film isn't bright and kitschy. The soft, moody lighting and the wry but straightforward performances make it a gloomy affair. There is also a cold distance to it (Lee is sometimes criticized for this, I think it only heightens the drama of his films even more).

The offbeat and vastly underrated score by Mychael Danna

has a surprisingly ancient feel. Sparse and percussive, it would later influence other suburban dramas such as Thomas Newman's scoring of American Beauty

. Danna has remarked that he "liked the irony of suggesting music endemic to Native Americans, to remind us that as the characters walk through the woods to their mod houses, the ground beneath their feet used to belong to civilizations that are long gone. Ang and I wanted to remind people of the power of Nature—that Nature was there before anyone else, and that Nature will be there when we’ve gone.” 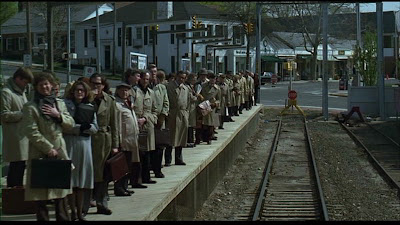 With fondness for the era, costume designer Carol Oditz searched for a "visual grace," wanting to create "a surface tension, that was right for the characters in the story." There's a tenderness and awkwardness to the clothing and a slight cartoonishness (the the film begins with Tobey Maguire shifting through a comic book). But none of it goes into farce. Joan Allen's long dress looks particularly taxing on an icy driveway; Christina dons a poncho Red Riding hood coat; professionals lined up at the train stop decked out in khaki trenches. The garishness of costumes and the lack of morality is on full display in the drunken "key party" climax where the suburbanites swap carkeys (to their behemoth vehicles) and sexual partners.

There are many references: toe socks, Nixon masks, dated pop tunes (including a school band version of "The Morning After"

appropriate for a film like this, since it is, in some regard, a disaster picture) are put to good use. All of this is tempered a bit by the performances of a fabulous cast. As one of the ineffectual parents, the usually broad, Shakespearean actor Kevin Kline delivers a quiet performance that ranges from comic to intensely somber. The usually wonderful Joan Allen delivers another bravura turn. In a winning moment, she mimics her daughter by riding a bike and then, unsuccessfully trying to steal lipstick from a drugstore. And Sigourney Weaver, who is often flat, is given a really wonderful role here. A bitter, relentlessly serious wannabe vixen, she goes through much of the film without a flicker of happiness. Her ridiculous waterbed (her husband hates it) captures her susceptibility to trends and her own marital and emotional unease. Her bored, cutting reaction ("I have a husband. I don't have a need for another one.") to a blabbering Kline is particularly priceless. And the younger cast members, notably Maguire and Ricci, are well-suited to their roles.

The production design was based on Cubism (a la ice cubes). The cold modern houses (though the Hood's is a touch warmer in tone) of the two families are deep in the woods, unlike the stately Colonial homes in Moody's novel

. In concurrence with the image of ice, the visuals are full of glass and geometry (in the clothes, the furnishings, the wall art). Filmed in spring, the "ice" itself was sculpted and cast in resin--trees dipped in silicone, hair gel on windows. It still looks beautiful, haunting and real in an era of CGI. The effectiveness of the effects lends to the emotional wallop of the film's final tragedy: the death of a child on ice. ****

-Jeffery Berg
Posted by MrJeffery at 8:12 AM