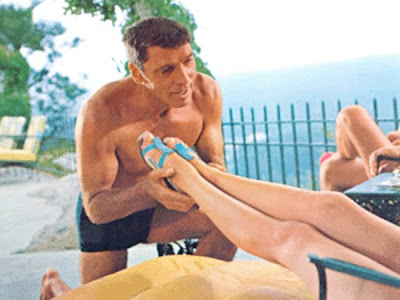 begins oddly, deep in the woods, with a heavy, melodramatic score

(Marvin Hamlisch's debut). Ned Merrill (a very physically fit and believable Burt Lancaster) appears, clad only in a navy swimsuit, running through the forest and into the backyard of a large house. He has some stilted conversations with the people who are there, mingling around a swimming pool on a beautiful summer day. There is something off about Ned. He hasn't seen these people in years. They are excited to see him, but he doesn't seem necessarily engaged with them. He is too busy plotting. Here begins Merrill's journey: swimming through the backyard pools of his neighbors to get back to his house ("pool by pool, they form a river all the way"). He meets strangers and past acquaintances like the babysitter of his two daughters and his unsettled old flame. Based on the famous New Yorker story by John Cheever

is a moving, if not quite entirely successful, indictment of the American Dream.

The filming location of Westport, Connecticut is perfect. The houses are large, with well-manicured backyards and gleaming pools, situated on expanses of forests. The dwellers are quite distant from one other, lazing about on lawn chairs, drinking cocktails, or throwing parties, rarely swimming in the pools themselves. The pools are more of a status symbol. One of them is drained because the young boy there is afraid of water. That particular boy is a sad lot. Alone (his parents off, the maid inside the house) selling lemonade, he is quite fond of Ned's charisma. Ned tells him to be his own man, not to worry about being athletic or "part of a team." There is something true about this but also ironic since Ned is his own man but one deep in delusion. By his final swim (in a crowded public pool, where he is confronted by two couples over his debts), Ned is cold and sore, his zest greatly diminished. The ending is inevitably sad (in a good way) but a bit portentous in its delivery. Hamlisch's pounding score does no favors here. With no music and no booming thunder, just the sound of rain, would it have been more effective? 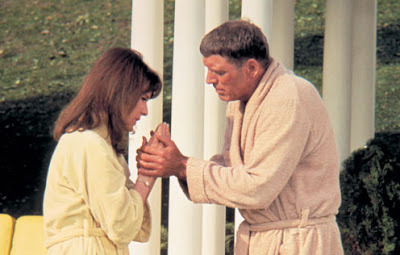 Any director that can make such an involving film out of a ten page story should definitely be commended, even if the source material is rich. Director Frank Perry sets the tone well. The script by his wife Eleanor Perry is often perceptive and quietly cutting. There is a lot of embellishing but much of Cheever's odd symbols remain (a barren tree that Ned thinks should be "blighted"). Frank Perry left the film in mid-production due to creative differences with Columbia. Sydney Pollack stepped in to direct Lancaster's scene with Rule. It certainly is a dark picture, a fable and biting social satire of sorts (one of the neighbors brag about their pool filter that blocks out 99.99.99% of waste), the kind of film that audiences in the late 60s were embracing. It's frustrating though that the film often eschews subtlety (always tricky to do with suburban satires). But the story itself, Lancaster's savvy and real performance and the bright, hauntingly vivid late 1960s feel make The Swimmer