the decade of the dames: 'looking for mr. goodbar' 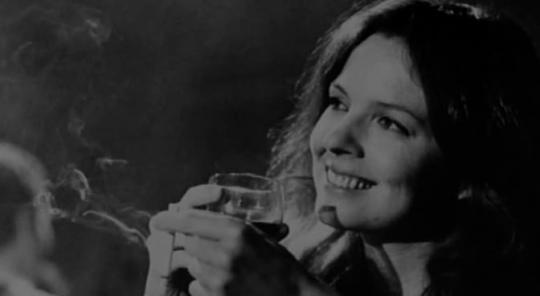 There are shades of Looking for Mr. Goodbar in recent films Shame and Half-Nelson where men, seemingly polished in their day jobs, have secret night-lives which wallow in addiction (sex and drugs respectively).  What makes the 1977 film directed by Richard Brooks unconventional is its lead female character played with wonderful naturalism by Diane Keaton.  The movie is a cautionary tale, aimed at the hedonism of the seventies, and based upon the murder of New York schoolteacher Roseann Quinn.  Theresa (Keaton) is a teacher for hearing impaired children and living unhappily with her overbearing Catholic parents in the suburbs.  After a breakup with a married man and a fight with her father, she moves to the city and begins nightly barhopping, dabbling in promiscuity and risque sex (all of this seems tame by today's HBO standards but was likely shocking, especially for a studio pic, in the late seventies).  One of her hookups Tony (Richard Gere, in maniacal mode) is a somewhat erratic Vietnam vet. Theresa, haunted by her childhood demons, can't seem to settle down--she's broken like the rectangles of glass dangling above her bed.  Her sister (Tuesday Weld, an extraordinary presence in an Oscar-nominated role) is a bit unbridled and unfocused as well, but more playfully so ("we all need somebody who won't blame us," she tearfully tells Theresa in one scene).  There is something dark and unnerving about Theresa's dissatisfaction and her loneliness.  The final sequence, lit in strobe light (William Fraker's unsettling cinematography was also nominated for an Academy Award), is tragic, lurid, and uncompromisingly cynical. 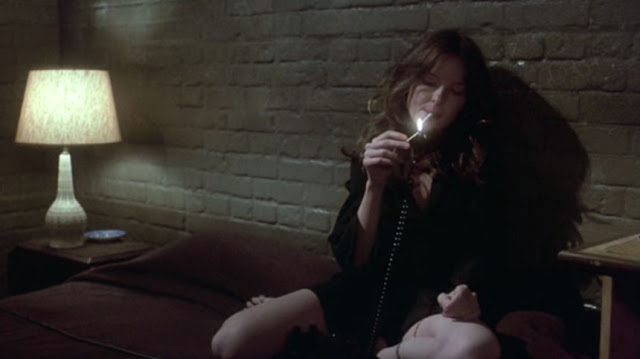 Grim and freewheeling with frayed, unsatisfactory scenes, Goodbar is a sort of mixture of Brooks's gritty movies (In Cold Blood) and his glossy Tennessee Williams adaptations (Cat on a Hot Tin Roof, Sweet Bird of Youth).  The loose overall feel of the film, and its perpetually aggrieved protagonist, is defined in the opening credits, a montage of nightlife in smoky bar snapshots backed by mid-70s tunes (the film's lonesome main theme by Artie Shaw and Thelma Huston's painful disco plea "Don't Leave Me This Way" among them).  Throughout the film are symbolic images of guilt (crucifixes and nuns) and background chatter of the era's social change (feminism--"the decade of the dames," abortion rights, sexual revolution, Jimmy Carter on rebuilding trust in government).  Brooks clumsily handles Theresa's melodramatic daydreams but it kind of adds to the picture's murky atmosphere.  Unfortunately this still hasn't gotten a DVD release (perhaps because of song rights; the soundtrack is chock full of excellent music by Boz Scaggs, Bill Withers, and songs Donna Summer's "Could It Be Magic" and Diana Ross's "Love Hangover"), a proper one (Criterion?; check out Meep's lament of a lack of DVD release) might help revive interest in it; the movie definitely deserves re-evaluation.  Keaton is quite impressive too, in a different, less-affected than usual performance from her.  She won the Oscar that year for her iconic turn in Annie Hall, solidifying her as a comic actress, but there's something haunting and mesmerizing about her in Goodbar.  This would be a good double-feature with Saturday Night Fever, another film about a repressed seventies urbanite on the prowl.  It's just amazing to reflect upon how Hollywood portrayed contemporary life in those years, something, if not for independent cinema, we would never see of our own times. ***