you can check in any time you like (but you can never leave): a guest post by karen g. 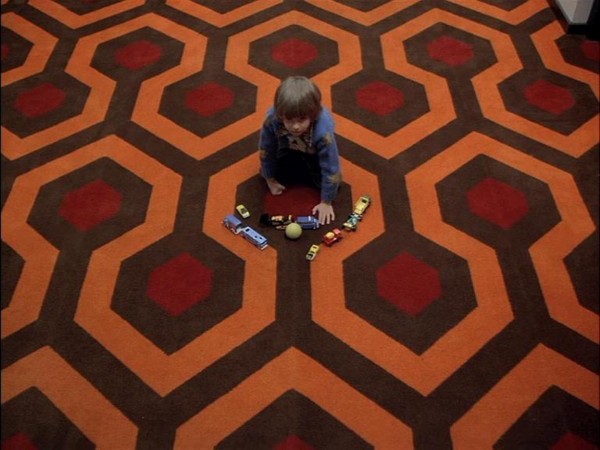 We’ve wandered the endless hallways and had the bold carpet prints burned into our memories. We’ve stood in the ornate common room, surrounded by dark wood with bewitching candle chandeliers dangling overhead. We’ve stared out the windows and admired the beauty of the mountainside and took great delight in strolling through the seemingly infinite green maze outside. We’ve considered it a perfect resort for a family getaway, if not for the fact that some of the previous guests were not always happy with what this beautiful hotel had to offer. In a typical hotels.com review a guest wrote: “My girls, sir, they didn't care for the Overlook at first. One of them actually stole a pack of matches, and tried to burn it down. But I "corrected" them sir. And when my wife tried to prevent me from doing my duty, I "corrected" her.”

In my opinion, the central theme of The Shining is this. You can run from your problems, but they will follow you no matter where you go. Several cozy months away at a peaceful mountain retreat may sound like just the ticket to get some work done, but those demons you left behind might be waiting for you at the front desk, even before you check in. Some of them may even be disguised as warm, inviting symbols from our childhood, to make the deception even greater.


Winnie the Pooh checks into Overlook: 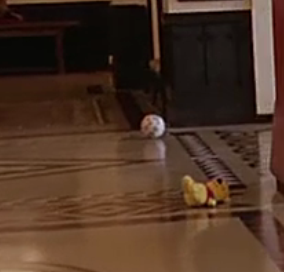 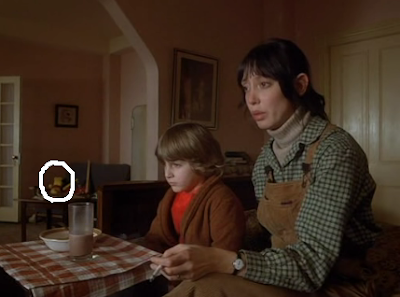 Debated to be a symbol of innocence in the midst of something very dark and evil, a stuffed Winnie the Pooh shows up in several important scenes of Stanley Kubrick’s The Shining. While Stephen King was famously known for hating Kubrick’s film version of his book, Kubrick did use subtleties to portray the novel’s deep subject matter. A haggard-looking Wendy sits, smokes and stares at the television. Her demeanor shows that she is aware of so much more than she is willing to share. She knows that her son is being abused by her husband and feels helpless to stop it. Danny sits next to her, staring blankly as well. He looks as if he can find no peace with the woman who was meant to protect him. Another reference to Winnie The Pooh came in one of the introductory scenes at the Overlook: 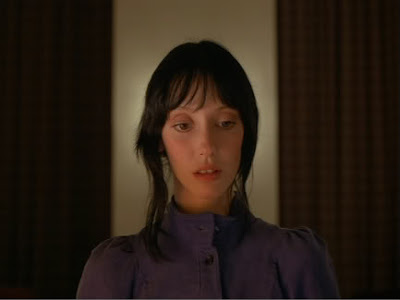 Dick Hallorann:” Mrs. Torrance, your husband introduced you as Winifred. Now, are you a Winnie or a Freddy?” 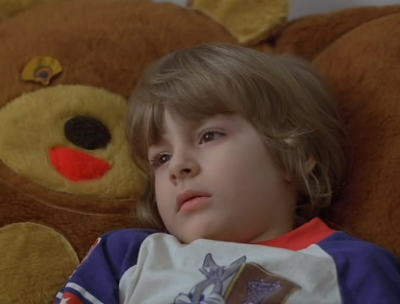 In Danny’s introductory scene, the lethargic child slowly answers a psychiatrist’s questions while resting on a large, cheerful, bear pillow. The contrast of the horrors he experienced against the backdrop of what a childhood is supposed to be is what makes this scene extraordinarily eerie. Commentary on the film has hinted that Danny was not only physically abused, but sexually as well. Danny lies on the teddy bear pillow with his hands covering his underwear. A gesture that he felt scared and ashamed. The abuse is also subtly hinted at when Danny has the following conversation with Hallorann:

Dick Hallorann: “…How long have you been able to do it?... Why don't you want to talk about
it?”

Danny Torrance: “I'm not supposed to.”

Dick Hallorann: “Who said you ain't supposed to?”

Danny Torrance: “Tony is a little boy that lives in my mouth.”

Dick Hallorann: “Is Tony the one that tells you things”?

Dick Hallorann: “How does he tell you things?”

Danny Torrance: “It's like I go to sleep, and he shows me things. But when I wake up, I can't
remember everything.”

Dick Hallorann: “Does your Mom and Dad know about Tony?”

Wendy is aware of Danny’s abuse but is helpless or at a loss as to how to stop it. Children create imaginary friends to deal with loneliness or traumatic events in their lives. Danny’s friend Tony not only makes him fall sleep when bad things happen, but he also tells him not to talk about it after. 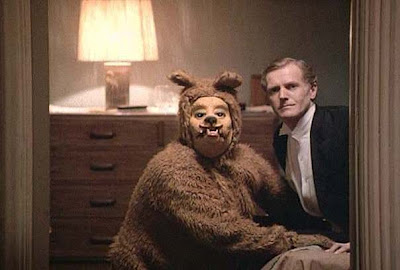 In King’s novel, his character, Millionaire Horace “Harry” Derwent owned the Overlook Hotel in the 1940’s. In the novel, Harry Derwent threw a masquerade ball and in, what is known as the more “unexplained” scenes in Kubrick’s movie, Wendy Torrence runs through the hotel and sees something very strange, a man in a tuxedo lying back on a bed while a male in a bear suit performs oral on him. The scene is brief and disturbing. When the men notice Wendy, Derwent sits up on the bed and he and the man in the bear suit stare at her curiously.

To take a deeper look at this is to possibly assume that the owner of the Overlook has now noticed Wendy and is ready to claim another victim to add to the hotel’s list of ghostly guests. In the novel, Derwent was portrayed as an unsavory character and was even considered by Jack Torrence to be the devil himself. In life, Derwent could have have whatever his heart desired. In death, he would have the same. 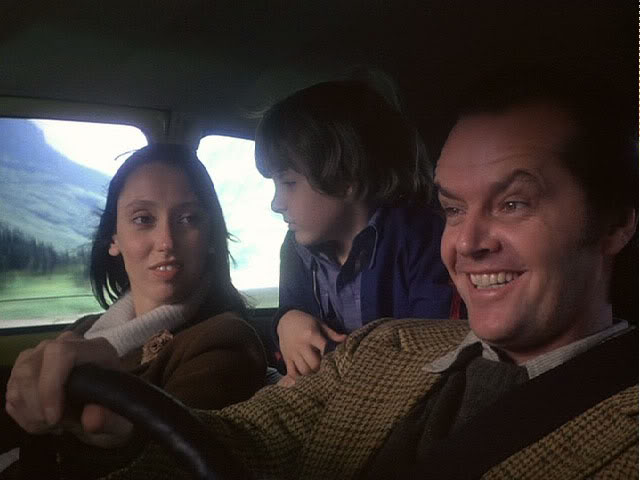 Kubrick’s direction in this movie turned every day people, objects and actions into something evil and terrifying. The man in the bear suit, something, that in any other setting, would seem whimsical and funny becomes twisted in it’s portrayal. The playful ball that lures Danny into room 237 – an innocent toy that leads Danny into a room of unspeakable horrors. The little girls in their pretty blue dresses who only want a friend... forever. A fatherly hug to assure a frightened child that everything will be okay. 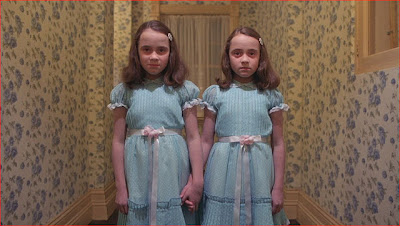 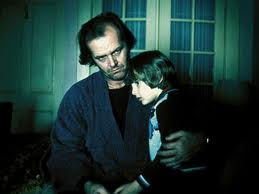 In every viewing of this movie, I discover something new – it is a living piece of art that, in it’s own sinister way, reveals a new secret every time. King reprimanded Kubrick for not including certain aspects of his novel in the movie (the animals in the moving hedge), however the movie is laced with animal themes, pictures and nuance that with every viewing, brings a deeper and more disturbing understanding of the horrors of The Overlook. You’ll discover them for yourself if you’d only step inside… 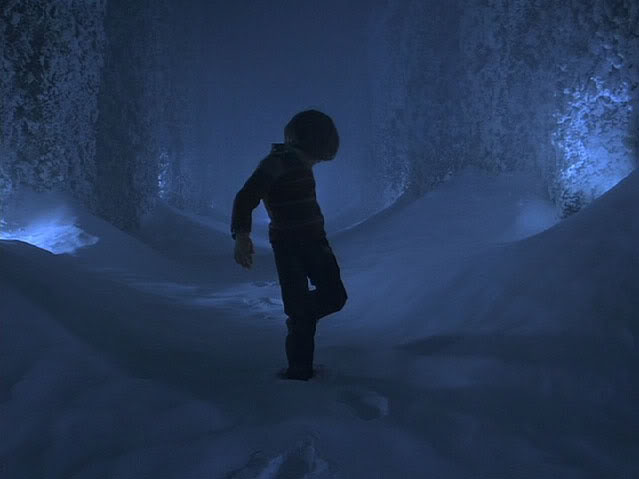