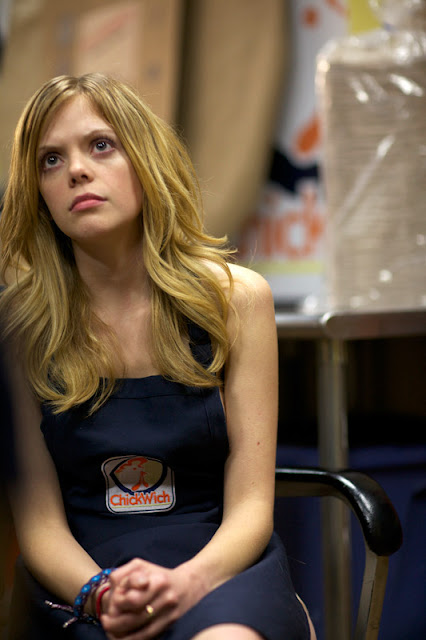 Sometimes appreciation and admiration for a film grows with time.  It's been a few days but I still can't get Compliance out of my head. It was met with controversy at its Sundance premiere: people walked out, shouted out at the screen.  One would think that a movie like that would be shockingly obscene and over-the-top, but Compliance is a squirmy slow-burn because of its immediacy and claustrophobia. I'm anxious to see how the film fares when it opens up in more areas because I think it could bring up many fascinating conversations on human behavior (the Milgram experiment is often being brought up lately on the message boards)--something sorely needed in movies these days.  A film can embody the tone of its times, even if unintended, and Compliance has landed in a year of the Penn State controversy, the nauseating Chick-fila-A day and in an election year where many are about to vote against their own economic interests.

Writer / Director Craig Zobel was haunted by a story of a Kentucky McDonald's employee who was accused by a man over the phone, posing as a police officer, of taking money from a customer.  Under direction from the man on the phone, the store manager made the employee go through a series of humiliating acts including a stripsearch and sexual assault.  "I just kept wondering what it could have been like, in order for things to get as far as they did?  And what was the guy on the other side of the phone saying?" Zobel asked himself.  He quickly (in around a month's time) wrote a script based upon the incident.  Compliance ends up closely mirroring the story though this film is more than just a simple reenactment like the schlock ones on true life crime shows.

Much credit goes to Ann Dowd for her tremendous and quietly powerful performance as the manager caught up in the incident and implicit in its most galling moments.  The rest of the ensemble--notably Pat Healy as the creepy manipulator, Ashlie Atkinson as a co-worker, and Dreama Walker as the incredulous doe-eyed victim--are vivid but Dowd gives the movie an incredibly emotional pull, especially in its final moments.  She is particularly perceptive about her character: "...all it takes is that perfect storm of low self esteem, a woman who was pleaser who defers to authority, especially men.  A woman who's been probably told you are not worth a whole lot so you had better grab this guy and marry him because you won't get more opportunities.  What she does for others and the approval she gets makes her who she is.  Put that with a very busy Friday night when on your watch a lot of food is spoiled.  Too few staff and out of two key ingredients.  All of those things combined and then you have a detective on the phone.  Add that up and you have the potential for a real disaster to occur."

Amazingly the bulk of this film was shot in three days with the actors talking on the phone together.  One interesting aspect of Zobel's work here is the pacing.  Things are sometimes almost a beat short of what is expected and there are numerous closeups (the cinematographer is Adam Stone who has been gifted with creating disturbing, beautiful reworkings of the deceptively idyllic and seemingly complacent settings of George Washington, All the Real Girls, and Take Shelter) of the fried chicken and fries of the fictional ChickWich (the sort of corporate, sexist nature of its name doesn't seem to be a mistake) restaurant.  The orchestral score too by Heather McIntosh heightens this tense little story into a deeper realm of tragedy.  Zobel's direction creates an agonizing real-time feel.

I don't want to give too much away but those who walked out at Sundance, perhaps thinking the movie was simply exploitative, or maybe unable to handle the seemingly implausibility of the story and its characters, missed out on exactly what the movie is about.  I can't think of the last time I've seen a movie where dramatic irony was so frustratingly part of the action -- not just in a few scenes, but basically the entire film.  At first I found the rushing of scenes of the denouement unnecessary but in a way it was essential to the movie's sense of exhalation and reflection, giving it, I think, a reason to revisit and debate.  ***1/2
Posted by MrJeffery at 12:32 PM