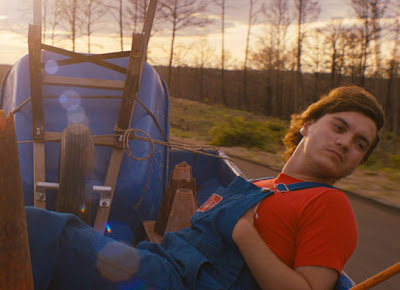 David Gordon Green is known for his broad, idiosyncratic comedies (Pineapple Express, The Sitter) and also his sprawling mood pieces (All the Real Girls, George Washington), his latest, Prince Avalanche, is a marriage of these styles.  The movie is an adaptation of a 2011 Icelandic film entitled Either Way.  Green's version is set in 1988 in the woods of Central Texas in the aftermath of a fire.  Alvin (Paul Rudd) and his girlfriend's younger brother Lance (Emile Hirsch) are camped out there, hired to repaint a road.  During their work breaks, Alvin enjoys the tranquil natural surroundings and writing letters to his girlfriend, while Lance yearns to go back into town to party and sleep with girls.  They meet a slapdash truck driver (a very funny Lance LeGault who sadly passed away after filming wrapped; knowing that it's his last performance gives the movie an added poignancy) and a hapless woman who lost her home (non-actor Joyce Payne who, found on location at the wildfire-ravaged Bastrop State Park, is an effectively haunting and wry presence here). 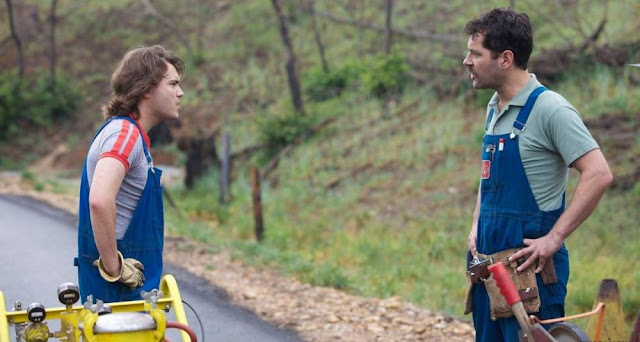 The two men in this story are stuck together with their boring job, both desiring to do machismo, "manly" things: Lance wants to pick up girls at pageants and dance clubs; Alvin pictures himself as a fish-gutting outdoors-man. That conflicts will arise between the two and the fact that they are pretty much failures isn't surprising in a film with this kind of sardonic tone, yet the energy and magnetism of Rudd and Hirsch, make them endearing company.  While also taking place in a rambling though sort of claustrophobic setting with the outside world referred to through storytelling, those looking for a rollicking comedy like This is the End, may be disappointed.  The humor in Prince is subtle and shaded, sometimes unexpected.  Tim Orr's camerawork lingers on the scenery and wildlife and the men's interaction with it (yellow paint runoff in a stream), offering many pretty, sun-dappled shots.  Green aptly notes that there is "a fragility" to Orr's cinematography, "it's not a super confident camera with an attitude.  It's a camera that's trying to find things and trying to keep up with the characters."  The score by Texas band Explosions in the Sky and David Wingo, with its guitars and clarinets, is a throbbing, melancholy soundscape.  Both score and cinematography are a highlight in one mesmerizing sequence when Alvin blissfully treks around the woods. Having grown up in a rural setting in the south in 1988, I was reminded of my own childhood in spots, not to mention in Lance's wardrobe--the hiked-up athletic socks and hot pinkish, purplish surf T's (the costuming is by Jill Newell)--and I appreciated the symbolic contrast of his world and interests with their surroundings. The film's choice of year also heightens the importance of letters and phone calls to the characters, particularly Alvin.  While the story seemed to try to wrap up in a bright, concise, charming way, I was more lost and struck by the atmosphere than anything else, and Hirsch's amusing, unpredictable performance.  ***

-Jeffery Berg
Posted by MrJeffery at 11:43 AM