how to scantron august: osage county

After my screening of August: Osage County my audience filled out opinion Scantrons. Was the movie too dark? Were the characters too unlikable? What drew us to the movie? The advertising? The Golden Globe nominations for Meryl Streep and Julia Roberts?

And herein lies a problem already with bringing an adaptation of Tracy Letts' play to screen in this current movie culture. Not having read or seen the play, I can't comment upon its merits, but his adaptation here offers some small and arresting moments in a sea (or rolling plain?) of clunky, heated melodrama. Directed by John Wells, a prolific TV producer, the movie is thick-salted, sometimes suddenly sweet, and a bit grindy and hammered out like the Weston clan's leftovers in the garbage disposal. Food comes to mind because the film's big moment is a roiling dinner scene, where the family's past, stress and anger comes to roost.

Streep is Vi, the Weston matriarch (a word that's been used in nearly every review and sort of pains me to use but is completely accurate, especially with Streep's commanding presence, coiffed black wig and that brooch she wears) suffering cancer. Her poet husband (Sam Shepard) goes off to kill himself, which brings Streep's kin together for the funeral. Even though I haven't been a fan of many of her recent movies, it's hard not to be impressed by Streep's continued success and astonishing career. August might be one of her better performances of late, perhaps because it's so purposefully showy and a bit hammy. She loosens up and has some fun and dishes out (so well and so coldly) some bitter one liners. And she also gets some cinematically canned but killer dramatic moments (that cowboy boot monologue) with all the Meryl tics we've come to love and hate. 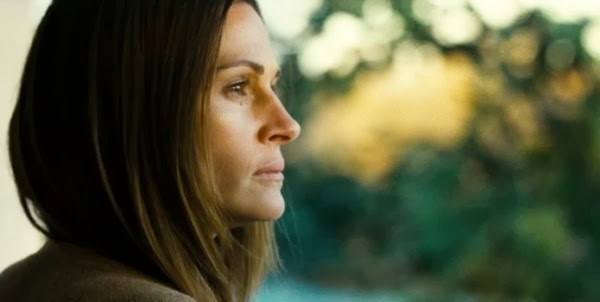 Julia Roberts is one of the more complicated characters as Vi's daughter Barbara and sails with it pretty well. Some may enjoy seeing America's former sweetheart being angry and veiny and saying fuck a lot (I admit I found that fun here and in 2004's Closer, a far more successful and potent stage adaptation); though she doesn't get much credit for them, I think she does better in more acidic roles than the heroines of some of her 90s pictures. Her Barbara is an interesting character who is figuring out where to go in the midst of family upheavals; somehow Roberts communicates Barbara's baggage, earthiness and hurt. 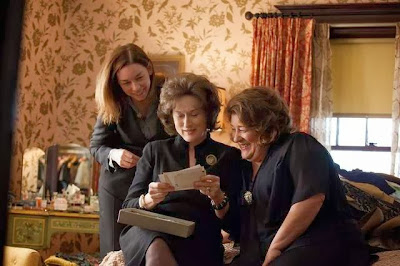 While I enjoyed seeing Julia and Meryl work their scenes, I was more of a fan of the more naturalistic turns than the starry ones.  As Vi's sister, Margo Martindale is a breath of fresh air in the movie--literally she enters the movie trying to air the house out. For years, an unappreciated bit player, it's nice to see her get some striking moments here. Julianne Nicholson feels very authentic as Vi's daughter Ivy, though she's saddled with a sort of awkward subplot.  Many of the other actors are good (including laconic Chris Cooper) despite the way their characters sometimes feel superfluous.

Best thing about it is the hot, sickly atmosphere (and the actors, in small ways, help create it)--from the yellow-tinged plains which Barbara despises to the stuffiness of Vi's drab old house.  The cinematography by the talented Adriano Goldman highlights this beautifully and does well with light and playing with shadows on the actors' forlorn faces as they move about the house.  Unfortunately the film has a bumpy landing: a mystifyingly golden coda that doesn't suit the picture at all that suddenly morphs into "Waltons"-esque end title watercolors of the cast members.

Though I was sometimes more surprised at what my audience was gasping at more than the events in the movie, the melodrama is thick and sometimes funny, like when Julia Roberts hurls pill bottles. But August: Osage County kind of ended up being everything that I love and hate about the movies.  The artifice of it all, and the fun (look at Julia and Meryl goin' at it! look at all that Meryl actressing: the tapping of the lip to the itch behind the ear, all becoming a little too familiar in her physical technique) and mystique that that artifice sometimes brings--it all feels too complicated for Scantrons.  **1/2