I've long been fascinated with America in the 1970s, so I found the exaggerated 70s Long Island con artist world of American Hustle particularly gleeful to watch but I can definitely sympathize with the detractors of David O. Russell's indulgent, needlessly complicated style.  What a better lead to have to guide you through an indulgent, needlessly complicated movie than the indulgent, needlessly complicated actor Christian Bale? I loved him in this and the warmth and campiness (that bedraggled toupee that opens the movie... a pretty obvious set-up for a story of falseness and disguise) he brought as the spearhead of Abscam. This is flashy stuff: the camera's always moving, people are always conniving and arguing, and music is always playing (Could there have been a more unique, better array of 70s music though? But Duke Ellington's seductive and brassy "Jeep's Blues" figures nicely).  Like its characters, the movie is gussied up--all sound and fury with a pretty hollow center.  However, I still found myself reveling in O. Russell's boozy showboating and the sparks of the ensemble (Amy Adams and woozy, unhinged Jennifer Lawrence have some terrific moments as does Jeremy Renner and manic and permed Bradley Cooper; and also welcome are Robert DeNiro and Colleen Camp in small bits). ***1/2 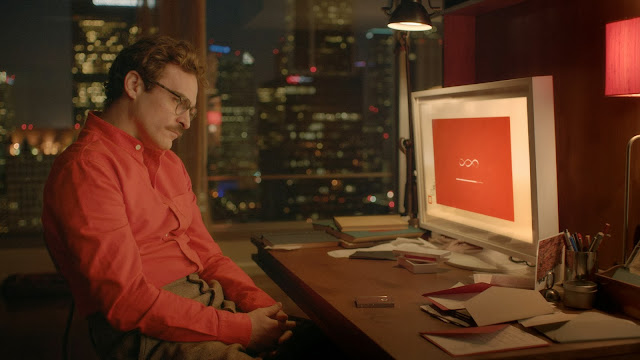 As Joaquin Phoenix's heartbroken Theodore falls in love with his operating system (the disembodied voice of Scarlett Johansson), writer / director Spike Jonze does some amazing world-building in his near-future L.A.-set Her. There's a lot of blazing orange, clean surfaces, high-waist pants, collarless shirts, buttoned-top buttons, and sardonic video games. I kept wondering what was going on outside of this relatively plush-looking, stream-lined yet slyly garish, lit-up metropolis because Jonze so effectively takes us into the closed-off psyche of Phoenix's eerily giddy romance. Even though Jonze hammers some things a wee too precious (Theodore's letter-writing job for instance), it's still fun to see such creativity on the screen. The photography by Dutch cinematographer Hoyte van Hoytema is marvelous and the story, in many moments, is quite affecting. ***1/2 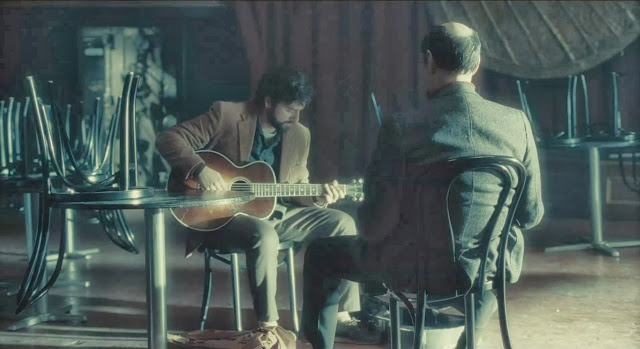 The Coens are adept at structuring movies in a unique, specific way. Appropriately, this one behaves and is shaped like a slow burn, earlyish rock era vinyl album, with a finale which mimics its opener.  Barely surviving, Oscar Issac plays the self-centered and desperate folk singer Llewyn Davis, trying to make a splash on his own after losing his duet partner to suicide. When the story departs from Llewyn's NYC life and joins in on a weird car ride with loquacious John Goodman, a Chicago audition and a snowy car-ride back, the movie is at its sharpest while still having the chilliest of hearts.  Except for the doofusy and fun "Please Mr. Kennedy" trio-ed by Justin Timberlake, Issac, and the ubiquitous Adam Driver, the T Bone Burnett-stamped songs were prettily sung by Issac and a little more dull and Mumford & Sons-pleasant than I had anticipated. *** 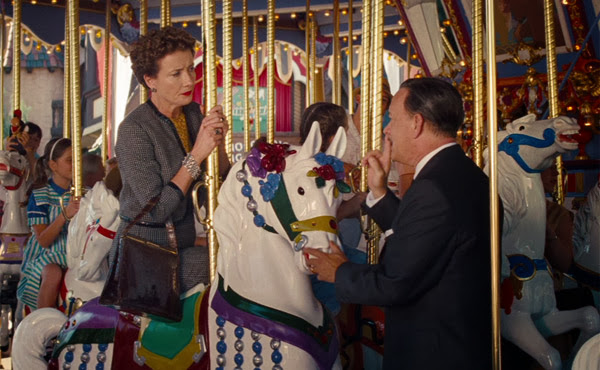 Once in a while a movie comes along that makes me feel, perhaps irrationally, angry.  I just could not get on board with this movie at any level. And then I read about the real-life P.L. Travers and got even more annoyed. This is Disney's version of author Travers' (Emma Thompson: way too brilliant of a person and actress for this drivel) spars with Walt (Tom Hanks in a wrongheaded portrait) on his Mary Poppins. Bogged down by schmaltzy flashbacks, schlock psychology and the film's quest to turn a fascinating figure like Travers into an irritating, tight-permed tweed robot (just so you know, she hates anything cheerful and she hates pears), the movie slogs along until its false finale and inevitable portraits of the real-life people over the credits to try to make you feel that what you witnessed previously was somehow authentic. The Sherman Brothers' delightful tunes raise this half a star. *1/2