Bittersweet third entry in director Richard Linklater's romantic drama series is a Peloponnese peninsula-set day'n'night in the life of a strained marriage. Somehow co-scripters and stars Ethan Hawke and Julie Delpy make you feel the weight of the years between them.


"We’re lucky on these films because the construction of it is going for a certain kind of honesty. So many romantic films—they’re kind of built on an artifice that we have tried never to really abide by too much. We have some mythic audience in our mind that would appreciate the unvarnished honesty of the darker moments of a relationship. I’d say we can do things that another kind of film couldn’t support. We’ve constructed our support all kinds of ugly and dissonant things that would fracture like any other kind of romantic film because our foundation’s just different. That’s great for us. We don’t have to spend a lot of time thinking about, “Oh our audience won’t like Céline if she says this or our audience won’t like Jesse.” We’ll lose ‘em! We’ll lose our audience if we do this or that." -Richard Linklater 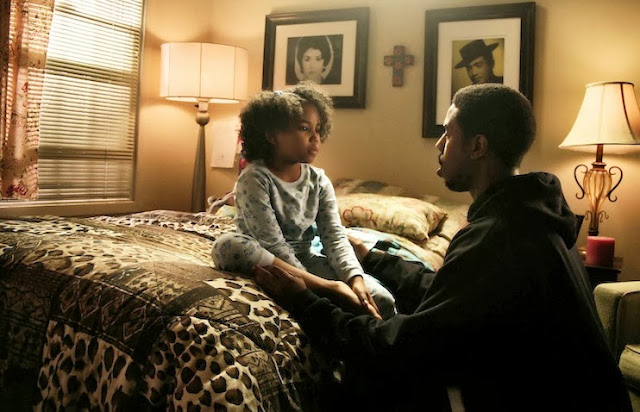 
"The footage, the trial, and the aftermath filled me with a great sense of helplessness. Many people in the Bay Area community participated in protests, others took parts in rallies and marches. There were also many riots stemming from desperation. I wanted to do something to make a difference, and I thought that if I could bring the story to life through art, and give audiences the chance to spend time with a character like Oscar, it could maybe lower the chances of an incident like this happening again." -Ryan Coogler 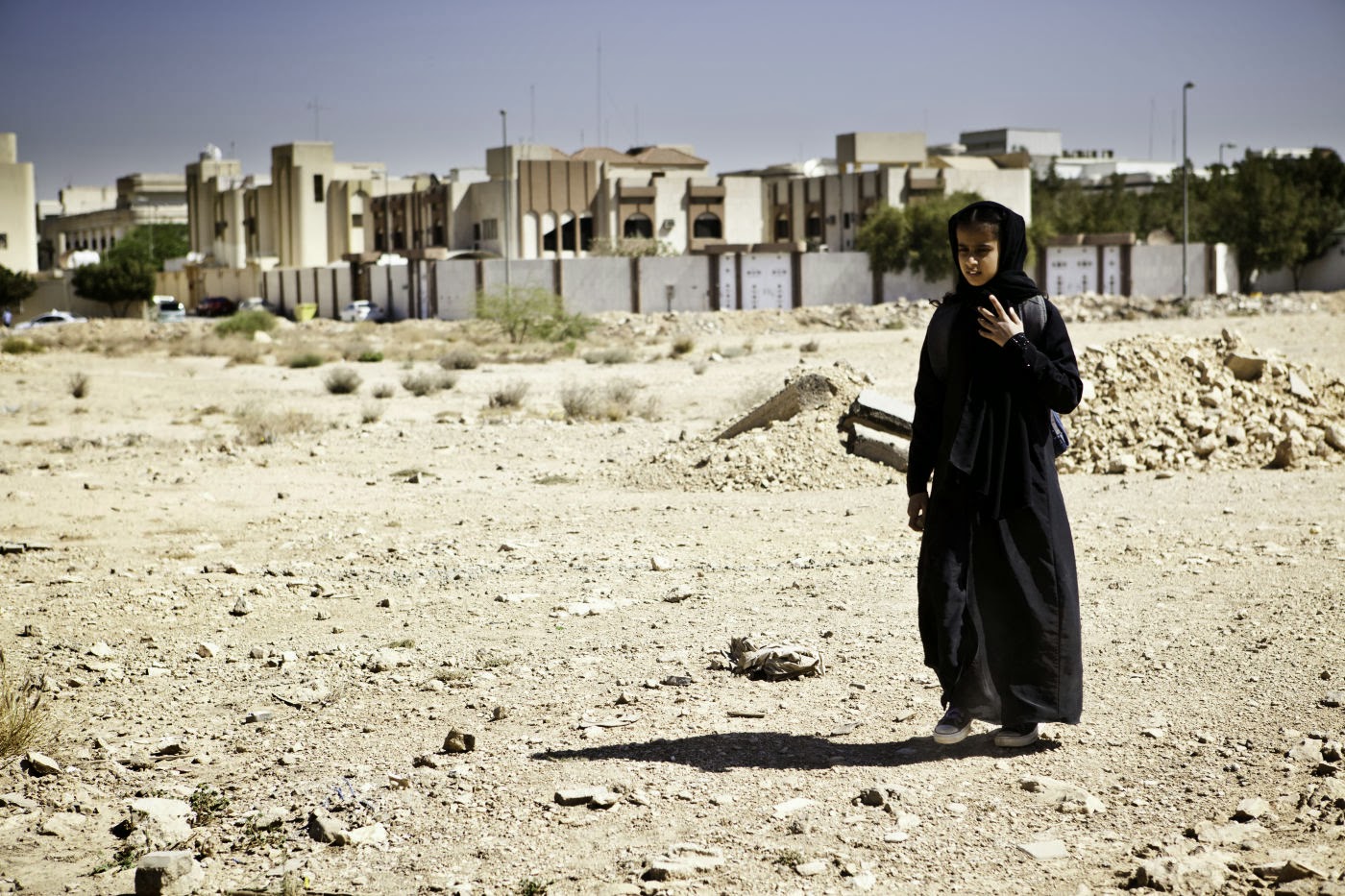 The first film to be shot entirely on location in Saudi Arabia and also the first feature by a female Saudi director, Haifaa Al Mansour's Wadjda is a fascinating and moving portrait of a young girl and her desire for a bike. Seemingly conventional on paper, Al Mansour's screenplay and actors create a complex universe.


"I have a passion of telling stories, and I know that the stories of women in Saudi are untold. And I come from that place that nobody knows about. It’s a hidden world. I have so much access, and I wanted to tell stories about that world that I belong to, to the rest of the world. And that’s how that started. But first, and most of all, it’s because I wanted to make a film. I love working with actors. Since I was a kid—in school I used to do plays, and direct, and write the script for them, and everything. I never acted. Even if I acted, I filled a gap in a small role that they couldn’t find anybody to do. But mostly, I would enjoy telling them what to do and how to feel and stuff like that, since I was little. I felt that I needed to share this. I felt like, this is a place that was far, and people don’t know much about it." -Haifaa Al Mansour 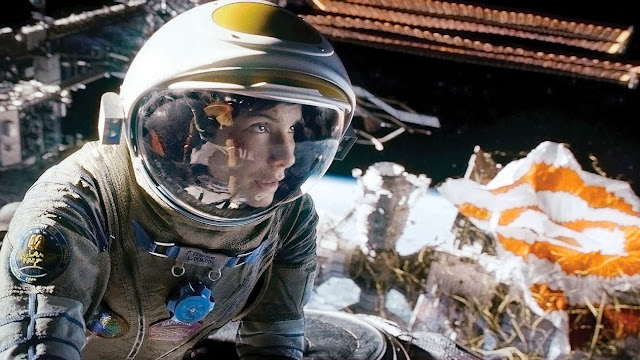 Spearheaded by Alfonso Cuarón's vivid direction, Gravity is fast-paced and beautiful with astounding special effects and technicals that make it both a soaring popcorn thrill-ride and a meditation on life's big questions.


"I was always longing to do, emotionally and physically, what my male counterparts always got to do.  I just felt envious, every time I saw a movie that I was in awe of, and it was usually a male lead.  And those kinds of roles weren’t available.  They just weren’t being written. So in the last couple of years, whether it was by us searching for something and turning it into a female character, or developing it yourself, you weren’t seeing it.  But in the last couple of years, things have shifted.  And then, there’s the fact that Jonas and Alfonso wrote this specifically as a woman.  It wasn’t an afterthought.  I think it was the integral part of the story.  I don’t want to say that’s revolutionary, but it’s revolutionary.  And the fact that a studio, on blind faith, would fund something as unknown as this is revolutionary. So, to be able to be the person to do it is beyond humbling.  It makes you realize, “I have to step up and be the best version of myself, so that whatever is asked of me, I can produce.”  So, every day, I’m so grateful." -Sandra Bullock

6. The Act of Killing

This strange and sobering doc from Joshua Oppenheimer examines Anwar Congo and the Indonesian killings of the 1960s using its perpetrators in staged reenactments.


"I realized that the question in the film could not be, “What happened in 1965?” Here was this story that wasn’t about then, but the way that the killers in the present enjoy impunity and are able to boast about what they did. I didn’t have to say that I thought what they did was great. They assumed because I was an American and because the US supported the military dictatorship and the repressive actions in East Timor and other things, that I was on their side. All I had to do to build trust was to be friendly and non-judgmental. Quickly I learned a word like “extermination,” which to us evokes the Holocaust, had a heroic flavour. I felt as if I had stumbled into a place where a genocide has been committed, the killers had won, had never been held to account, and then celebrated what they did ever since. Was it to intimidate the survivors? To impress the rest of the world? To ease their consciences? There were all these questions about how they imagined themselves. What was evident was that there had been a colossal miscarriage of the collective imagination."
-Joshua Oppenheimer 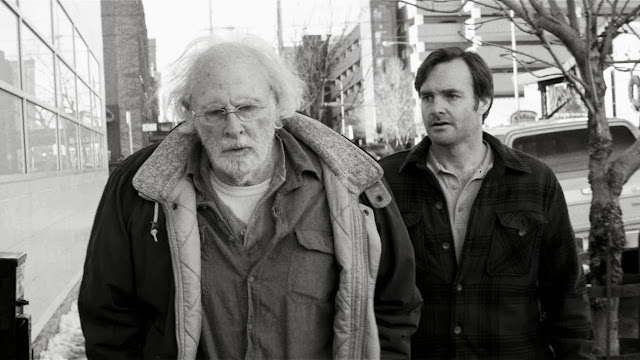 Melancholy though occasionally briskly funny look at a father and son in the heartland.


"The biggest challenge was to do exactly what I tell Will I’ll do at the end of the movie, “I’ll shut up.” That’s why I love that line so much, I loved that right at the very beginning, the detachment of the guy not really aware of what’s going on around him, maybe. Maybe he’s more aware than you think. People [like Woody] can’t tell you and that’s the charm of them and also the disability of them. So the biggest challenge was so be detached and to not be aware of what was going around and appear to have that be real.

The second challenge was not to show anybody the work of acting in the movie, and we all accomplished a lot of that. It looked like it’s total moment to moment honest behavior all the way through. [Alexander Payne] will be there with a camera and take the time to find that, so the audience can see the behavior evolving. That’s really what I wanted to do with the role." -Bruce Dern 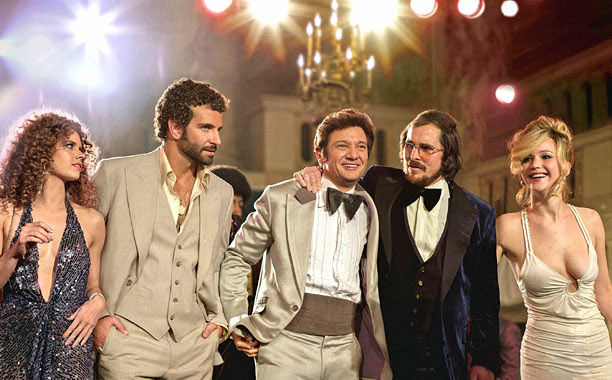 
"Everybody in the movie is hustling. They're hustling in a couple of senses: either in trying to get by and make something happen in a conning way, or in how we all kind of somehow have to use white lies or emotional stories that we tell ourselves to get through our everyday lives. I feel like everything is a form of storytelling. You can tell yourself a story about your marriage or your relationship, and it can be that story. But then, on a certain day, for whatever reason, that story stops cutting it, so you have to make up a new one. That's happening in the relationships in the movie, the love affairs, as well." -David O. Russell 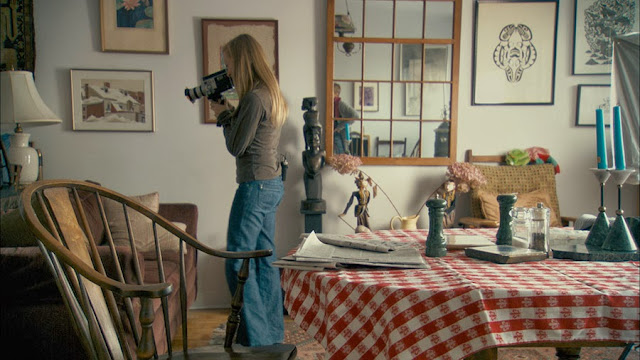 In this brilliant, rewarding deconstruction of the documentary format, the talented director Sarah Polley investigates her parentage.


"For me, with this film specifically I wanted to give a sense of a cacophony of many voices telling the same story, so that the truth is somewhere in between all of those versions, that we’ll never actually know the real truth or what happened, or what was said…in part because my mother isn’t here to talk about it, but also because we all remember things differently. I really wanted this film to honor the truth that exists in between all the different versions that people have of the same story." -Sarah Polley 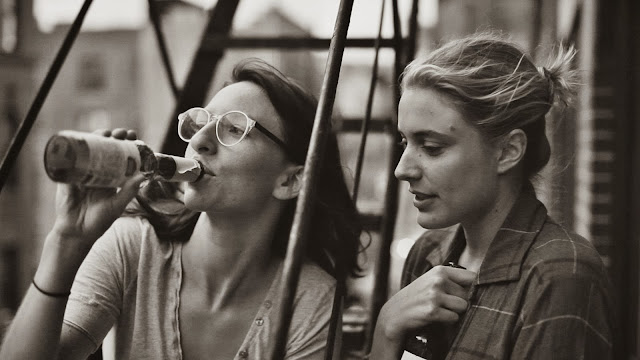 An incredibly lovely comedy from Noah Baumbach and Greta Gerwig on the mishaps of its title character.


"We don’t do any improvisation, so it needs to be as perfect as it possibly can be on the page before we go to shoot. It just means that we take a lot of care with the words and the rhythm and how it sounds, because we know that we’re going to be working from that. Most of it we wrote entirely separately, and then we would exchange scenes as we were writing them and get feedback and then we would re-write together. It’s a long process of writing scenes and moments and looking for the stories that exist underneath it. So, as opposed to writing a story and then dictating what the story is, it’s more like writing the scenes and then saying, okay, now what’s underneath this?" -Greta Gerwig (on writing with Noah Baumbach) 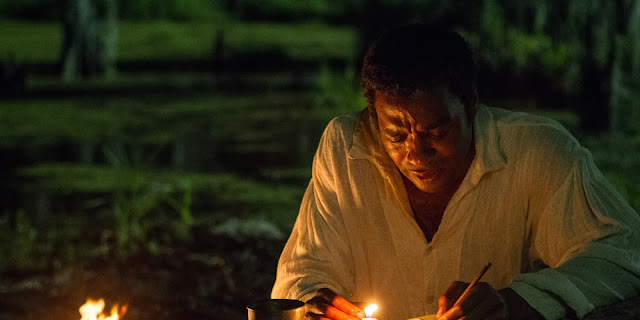 By the final act of this potent adaptation of Solomon Northrup's slave narrative, I felt like I was no longer watching actors but ghosts.


"Horrific things happen in beautiful places. I can’t put a filter on life. Life is perverse. Just the other day I was taking my son to school on my bike, and two police cars and an ambulance zoomed past us. After dropping him off, I went to the café where I have my coffee every morning. They told me before I got there [that] a 7-year-old child was run over by a garbage truck ... the father was there.

Life is perverse. It was a beautiful day. You had these beautiful plantations, but horrific things happen in the most beautiful places." -Steve McQueen

Other films of note (in order of preference):

The Spectacular Now, Short Term 12, Her, Prisoners, Philomena, Gimme the Loot, The Conjuring, Cutie & The Boxer, Enough Said, In a World..., The Past, Newlyweeds, Blue is the Warmest Color, The Way Way Back, 20 Feet from Stardom, Ginger & Rosa, Blue Jasmine, Prince Avalanche, The Bling Ring, Side Effects, Spring Breakers, Inside Llewyn Davis, Labor Day, The Wolf of Wall Street, No, The Great Beauty, Captain Phillips, In the House, Dallas Buyers Club, Lee Daniels' The Butler, Blackfish, Museum Hours, Kon-Tiki, Rush, The Company You Keep, You're Next, Blancanieves, Mud, What Maisie Knew, The Hunt, Bridegroom , We Are What We Are, The Attack, War Witch, An Oversimplification of Her Beauty, Nancy Please, To the Wonder, Stoker, What Richard Did, Blue Caprice, Room 237, Resolution, Lore, Crystal Fairy, 42, Ain't in it for My Health: A Film About Levon Helm, Salinger


-Jeffery Berg
Posted by MrJeffery at 9:31 AM