battle of the sexes

We have seen the use of the logo in unison with a film's period many times recently (including other 70s-set pictures American Hustle and Argo). Yet there's something apposite in Alfred Newman's "20th Century Fox Fanfare" as an opening to Jonathan Dayton & Valerie Faris's (Little Miss Sunshine, Ruby Sparks) Battle of the Sexes; a once bombastic ditty introducing a product of entertainment that now sounds vintage and tinny. The same could be said of the primary subject of the movie: September's tennis match between Billie Jean King (Emma Stone) and Bobby Riggs (Steve Carell) in 1973 at the Houston Astrodome. This is Americana at its most stirring-- a competition emblazoned with advertising (Sugar Daddy among them) with headstrong, consciously aware players at its core (Riggs trying to make a buck and garnering some attention; King trying to make a buck as well, but more importantly, also pushing social change), watched by a frenzied audience with clear loyalties through a major media outlet (ABC).

In homage to the formula embraced by the 1970s disaster picture of its time and the typical sports movie, the film criss-crosses an array of characters, with our heroine at the helm, up to the main spectacle. King and her all-women's tennis co-horts ditch the United States Tennis Association in protest of unequal pay and end up touring, under the feisty, chain-smoking guidance of Gladys Heldman (Sarah Silverman) with sponsorship from Virginia Slims. King, married to husband Larry (Austin Stowell), is wrestling with her sexuality and striking up a romance with her tour's adpoted hairstylist Marilyn (Andrea Riseborough). Meanwhile, pro-player Riggs is a boisterous gambling addict with a wealthy spouse (Elizabeth Shue) whose grown tired of his antics. Even though the audience and the film has warmer feelings for King and her fight for equality, the parallel stories are both compelling, sympathetic, and well-played by the seasoned cast. Once the two agree to the match, Riggs' clownish behavior increases alongside rising media attention, while King makes her own shrewd decisions (such as nixing an outwardly sexist sports announcer) and trains her heart out, refusing to back down.

There is an inherent risk in an actor's portrayal of playing a real person, especially a particularly determined, noble person, of being too "actorly"--and yet Emma Stone, with her grounded naturalism, delivers an exceptionally fine performance of warmth and spirit. Carell, a love-him or hate-him actor perfect for this part, infuses the story with humor and with a knowing wink to the audience at the eye-rolling lines of his character. The film around him respects King too much to make Riggs her one-note adversary: when we see the blight of panic on his face during the match, there's a glimmer of pathos for the showboating chauvinist. The bigger villain is probably Bill Pullman's Jack Kramer; like Riggs, he is entrenched in the ways of old-guard white male tennis elite; but unlike Riggs, he doesn't make any motions to stir things up. One doesn't bring Pullman into a picture for subtlety. He's great at hamming it up just slightly enough to make his Hollywood stick figure effective. Overall, the ensemble is aces. Known primarily as a stand-up comic, but underrated as a character actress, Silverman nails her role with great wit. It was also a joy to see Shue back; despite her small role, she imbues it with humanity and dry humor.

Dayton and Faris are excellent at bringing a talented, misfit cast together and also a top-notch crew. Nicholas Britell (Moonlight) drums up Rocky-like excitement with an exhilarating score that mixes early 70s-Baroque moog-melody kitsch with charging sports motifts and a bittersweet bend that emphasizes the historical importance of the event. The cinematography by Linus Sandgren (one of La La Land's great assets) stage people within and against geometric designs (similar to the boxed-in feel of the court) of hotel balconies and spaces that are distinctly Californian; in a nod to the time period, that isn't too on-the-nose, the film is dipped in a richly fuzzed, navy hue. The costume design (Mary Zophres) is particularly tremendous--with a keen eye for the everyday, the suits, the glam (Shue's get-ups) and Alan Cummings' character's brilliantly-captured tennis skirt creations. It seems that 70s cinematic costuming has become more sophisticated over the years--accuracy with vivid visual appeal and without blatant condescension--and the work in this film is particularly strong. 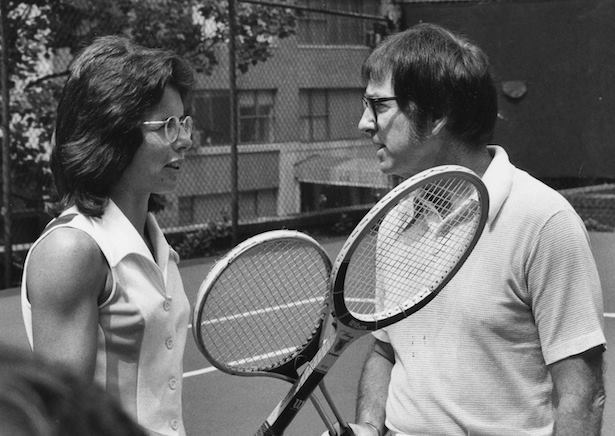 Overall, unlike King herself, the movie doesn't necessarily break much ground: Simon Beaufoy's script (Slumdog Millionaire) is peppered with cliches and easy set-ups. I can see how many could find the lesbian romance, as well-played and gently nuanced as it is, not particularly fresh (didn't we also hear "Crimson and Clover" in the love scene in Monster?). There's also Cummings' character (real life Ted Tinling, who probably deserves his own film) which may seem somewhat stereotypically peacocky by today's standards but to me, also feels like a reverent figure lost in time. Despite all this, the cinematic depiction of this story and the ensuing match as traditionally crowdpleasery feels just right: hopeful, acutely refreshing and rousing in these times. More than once my audience clapped and oohed-and-awed through the electric climax. Like the film's recycled 20th Century Fox logo, since the year of the match, much has changed in society, been steamrolled over; yet much still hasn't or has just morphed into new forms. ***1/2