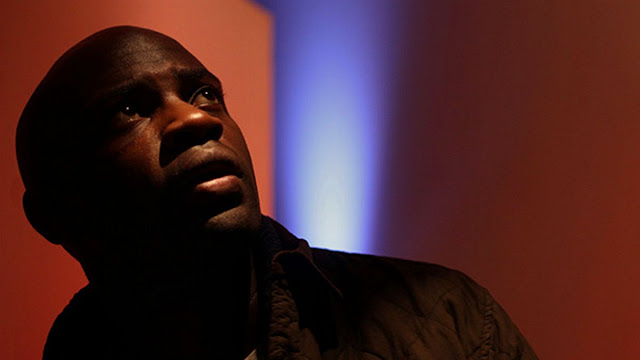 "Mellow thriller" may sound incongruent, but it fits when describing Sean Spencer's debut feature-length Panic; it's also a compliment. We begin with glary lights of anonymous-looking flats in London. One light in a hallway sputters. Music journalist Andrew (David Gyasi) is someone within one of those glass buildings. He's holed up there with a lovely vinyl collection, puttering about with his work. But we soon sense that he isn't at peace--that he recently dealt with trauma, indicated in his depressive throes, his agoraphobia and the thorny scar--a decidedly new one which he lingers over-across his chest. He also stares, sometimes with binoculars, out his window at the pretty woman (Yennis Cheung) across the way. Her days and nights are mostly banal--hanging clothes on an Ikea rack in her white-walled room, drinking tea, watching television. But on a night when Andrew breaks his isolation by inviting a hookup, an art gallery worker named Amy (Pippa Nixon), she ends up witnessing a brutal kidnapping of the girl in the widow. Andrew soon becomes a renegade detective of sorts, slipping in the underbelly of a crime ring. 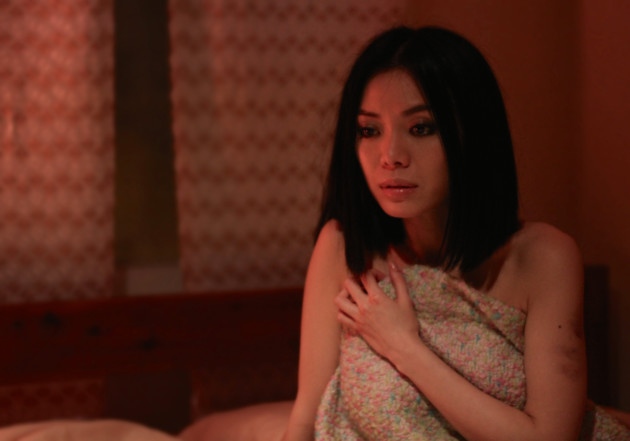 With homages rooted in Hitchcock's Rear Window, to Brian De Palma's Body Double, and Scorsese's Taxi Driver, Spencer takes cues from iconic works of iconic filmmakers. And yet, unlike those splashy films, with their vibrant use of color, Panic is a laconic picture, with few surprises, and with the visual aesthetic of milky tea: a washed-out color palate of taupe, browns, beige and gray. This gives the movie a dullish quality even though it may be apt in capturing the almost ominously-bland urban setting and the emotions of its central character. Not only is there is a haziness in the artificial yellow lights of the buildings but also in the sunrise itself, barely making its way out into the skyline. Voyeurism is a central theme, whether it's Andrew looking out his window, or through the window at restaurant patrons, or looking at people in a gallery gazing at portraits of other people. Also duality: in the baldness (perhaps a little bit of a wink to Travis Bickle?) of our protagonist and the victim's kidnapper, and also in the two women who become the forces within Andrew's life that make him finally leave his apartment. There's even a nod to Hitch's bunned woman's back of the head motif. The film is finely acted, especially by Gyasi, who gracefully maneuvers the occasionally bewildering motivations of his character. Spencer shows promise as a filmmaker and writer in this quiet, muted tale, with its respectful cinematic influences and simmering societal concerns. ***