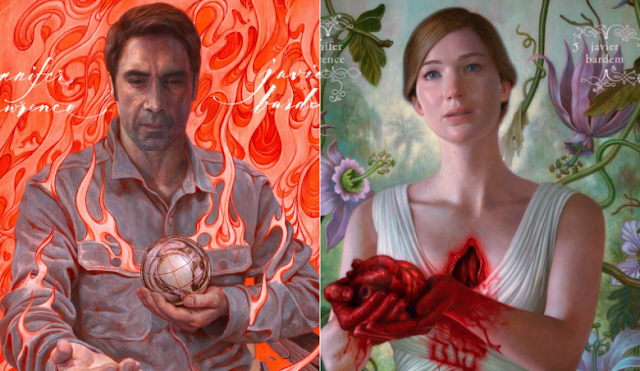 The title mother! rhymes with "smother," which is a word that recalls the nature of many of Darren Aronofsky's films. His movies sometimes mix a "high art" sensibility with bludgeons of icky imagery. You feel for his miserable protagonists and the actors playing them because their suffering is bright, blunt, physical, breathy, and tear-stained. But there's also a strange sense of remove, as the incidents and the body horror (sanguine seeping wounds abound) in those character's lives, first pitched in a calming sense of reality, seem so outlandish. Very seldom does an Aronofsky movie have a settled place to land (think the ill-fated drop-to-mattress in Black Swan) or much humor. However, in the opening of mother!, there's the immediate cheekiness to the ridiculousness of the title (and the Shakespearean quill font presentation). The setting is peaceful, earthy and attractive with tinges of unease (throbbing walls, a delicate crystal glowing with bits of ember). 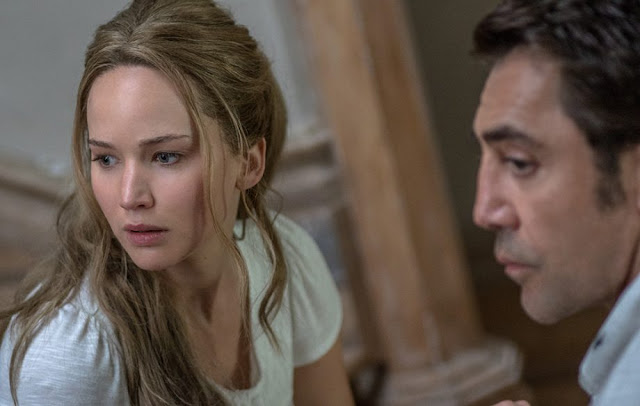 Jennifer Lawrence plays a reserved woman living with a poet (Javier Bardem) and obsessively renovating their remote mansion. The film, utilizing killer camerawork by Matthew Libatique, stays mostly in the constricts of Lawrence's point-of-view, with her long brown-gray hair and flowy white t-shirts, painters jeans, and nighties, moving throughout the rambling house. A couple (a pleasingly hammy Ed Harris and a perfectly calculating Michelle Pfeiffer) show up, disrupting the tranquil pale blue and taupe-walled household with discourteous behavior, neon underwear and smokers' hacking (this is a picture that refuses to breathe freely). Bardem eagerly takes them in while Lawrence expresses her displeasure to us through her vivid facial expressions (she's astoundingly good at this--doing so little to express so much with her countenance). It's this subplot where we see Aronofsky doing some of his best directing ever, with humor and unnerving tension. It's like a comedy of manners mixed with Polanski horror. 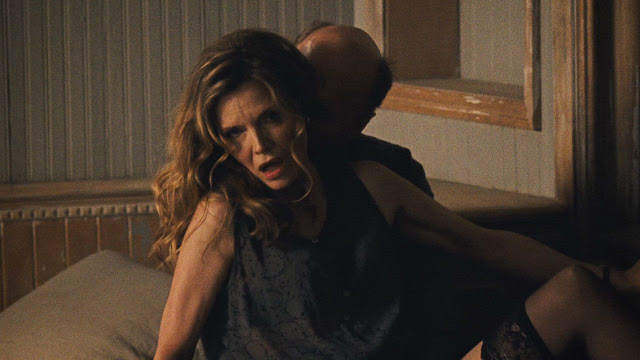 Then slowly, and in an increasingly garish way, the movie swings into screamy, gruesome farce with blatant shock scenes. Even though the filmmaker has been praised for this half of the picture, for his audacity, rabid energy and disdain for Cinemascore-squared mainstream audiences (you could physically sense the hatred in the theater for this movie after my showing ended), it also seems like an easy way (Aronofsky supposedly penned the script in five days) out of what seemed to be shaping up as a strong, sharp mystery. This is a filmmaker's film though, completely meta, in the vein of the rocket launchpad built on sand in 8 1/2, where the film scrapes away at itself until its destroyed (here, up in tacky CGI flames). There's also seemingly symbolic glimpses of the deification of artists, with worshiping crowds, badgering press and paparazzi, feeding off of the flesh of its targets. That poetry is the source of so much celebrity worship is also a good joke. The movie concludes sort of unsatisfactorily contextually and visually with a shimmer of Dan Curtis' Burnt Offerings. But both Libatique and Lawrence should be particularly commended for carrying us through this nightmare with skillful work and raw charisma. ***

Posted by MrJeffery at 9:20 PM