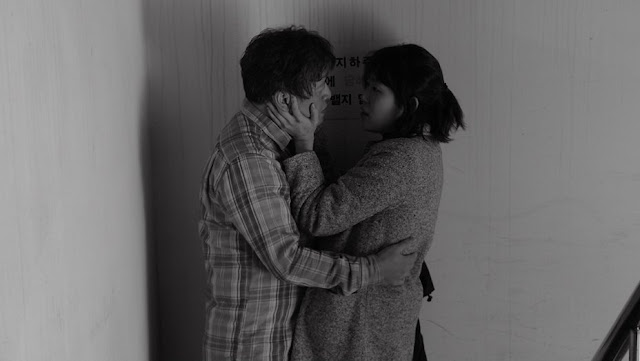 At first glance, things seem fairly route visually and temporally in Hong Sang-soo's The Day After, but the film ends up being more of a mystery to pinpoint exactly where we are. The movie is a fractured portrait of a publisher Bongwan (Kwon Hae-hyo) who has cheated on his wife with his previous assistant Lee Chang-sook (Kim Saeb-yuk). His wife Song Haejoo (Cho Yun-hee) strongly suspects the affair. Bongwan's new assistant Song Areum (Kim Min-hee) enters the fray on her first day in the midst of her boss's martial turmoil. Cinematic tales of infidelity are nothing new, but I found Sang-soo direction surprising and unusual. It's fairly grounded and ordinary-appearing. We are surrounded with signifiers of time (ticking wall clocks and calendars) and heaps of clutter: Bongwan's tidy, but object-filled dwelling--as if quietly teeming with memories--as well as his office, fully stacked with reams of paper--manuscripts, discs and books. The film itself however is cleanly shot in black and white (by Kim Hyung-koo), but utilizes occasional zooms and pans. 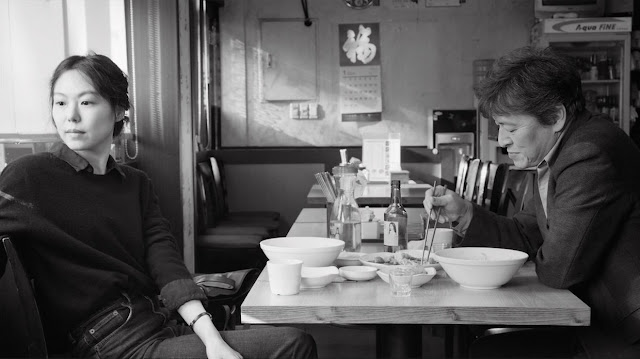 Areum's college-y philosophical waxing--"I am not the master of myself"--hints at the film's ambiguous, dreamlike quality. Is this movie placed in "reality" or more of a filtered recollection? The setting is urban, which can make the loneliest of settings, especially within crowds, but here, the streets and spaces are desolate; in a striking scene, Bong-wan runs along a dark path lined with outdoor gym equipment. We don't see the servers in the restaurant or the face of a driver. We might glimpse a few people through the reflection of windows, or a sudden shot of a woman on the train in deep concentration in her book. The off-hours feel adds to the atmosphere and is aided by the beautiful editing (by Sung-Won Hahm) which circumvents time in a fluid way. ***

Posted by MrJeffery at 5:20 PM