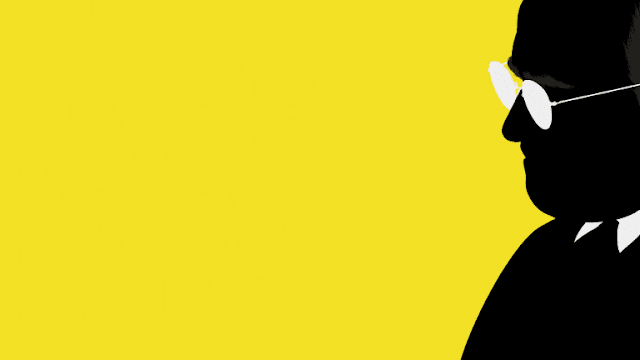 I had written this poem, "Dick," ten years ago in the early in the months of Obama's first term. I was flooded for the first time in my life with optimism about America. That, of course, would be fleeting. And now "Dick" seems like a relic.

Angler, Darth Vader, Evil Dick,
Tricky Dick, Jr., Puppetmaster,
Fuckoff Lad, Torture King, Dick,
I'm not sorry that I laughed
at the Mr. Potter crack
when you were rolled out
in a wheelchair on Inauguration Day
the day you finally became
a relic.  Many stack you up
to villains, forceful and dark
and yet you are nothing
but a trick, a curt, expressionless
slab of white flab with a sickly heart
determined somehow
to stay within us
forever. In all your stillness,
you have no sense of peace.
You with Bush
on Ulrickson's New Yorker cover
in mimic of Brokeback
the year you shot Whittington,
the year after Katrina.  To think
Michelle Williams was in Dick
the forgotten 1998 comedy
about Watergate, and years later,
the year we'd begin to put you to rest,
she'd be caught
by paparazzi on Smith Street
looking frail, griefstricken
shortly after the death of Heath
her Brokeback co-star,
her ex. How tragic,
in the dearth of ick
surrounding you
and the years of your reign.
In 2000, on the snowy TV,
I watched you debate
with criss-crossed legs
and remembered nothing.
In 2001, I watched Survivor
and contestant Michael Skupkin
breathed smoke, fainted into fire,
burned his hands, and ran
into the ocean, wailing.
The skin peeled-back
off his knuckles. All week,
CBS played commercials:
the most shocking "Survivor" ever.
And I watched Skupkin
evacuated by helicopter,
fifth place contestant Elisabeth Filarski
on the shore, longingly looking up,
bandana round her crown.
Soon she would have a voice
on The View, pointing her finger out
to the side, and defending your war,
your party. In 2006,
the poet polled the class,
Who wants to write political poetry?
No one. In the declaration year 2003,
some poets constructed
an anti-war chapbook
but were soon worn out
by their limitations,
by the years of destruction
and nothing. I watch you now,
in the nine years that have passed
since 2000, the TV
louder, larger,
the graphics bright
and blaring, ticker tape,
and I wish you would just give it up,
fly-fish yourself off in Wyoming.
You look worn,
guilty
as if sanded down
by all of us
and what ran through our wires:
the mundane chitchat
of all our hours.

I find my writing often builds on association and wallows in American glut. Maybe that's why I was engaged with Adam McKay's Vice much more than I thought I would be. Press reviews had been held back by the studio for weeks, and once opened-up, it received some vicious buzz. Prosthetic biopics, swathed in on-the-nose, cheeky comedy, usually isn't for me, but I ended up responding to the messiness, fullness, and ultimate emotional void of McKay's stirring pastiche of Dick Cheney. 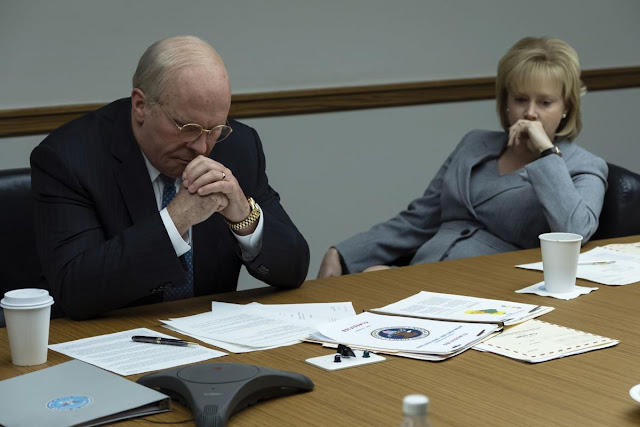 The movie hammers hard that Cheney was able to establish power through behind-the-scenes building--his deft, focus group-polled changes of phrase could soften the blows of the most insidious actions. Christian Bale, who can sometimes seem so blindingly actorly--grunting and sweating through transformational machismo--never betrays Cheney's famous mellow-toned reservedness. Bale sells different stages of Cheney's life--from Levis' clad drunken Wyoming lineman lug to green Nixon-era White House startup to Chief of Staff to CEO creep to conniving veep. He is matched well by Amy Adams as Lynne Cheney (though her big opening scene seems strangely off--like a marathon warm-up). She ends up nailing the icy Republican shelled-hair shtick and makes even a badly corny line sing ("We don't burn our bras / we wear them"). Like the worst cinematic villains, these two are callow. hardened, and insular--the lighting in the film seems to get darker and darker, and in its wake, we don't see them lovingly opening themselves to the world, but whispering to one another at a Washington party or trading faux-Shakespearean barbs under a giant paisley comforter. Another wheel is Donald Rumsfeld, whose steely press conference grins while detailing war, are deep in my memory. He's played by Steve Carrell. Having recently seen Beautiful Boy, it's kind of startling how he can blend within a picture in two very different registers. 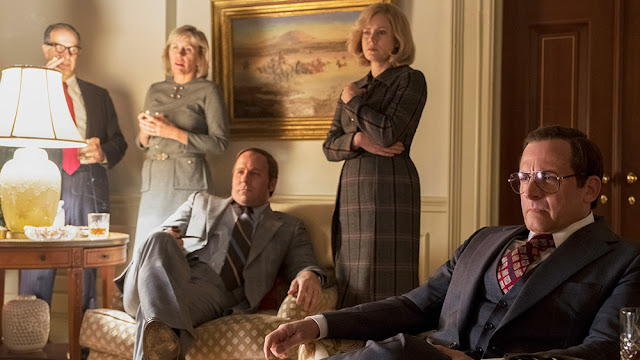 Power is the main hook of the picture, of course. And it keeps building and cascading for everyone. Even the identity and fate of our affable narrator (Jesse Plemons), the shaper of our cinematic viewing, is uncertain for most of the film. With someone as soulless as Cheney--under all of the fire and detritus and money--he is just a mortal body. During a time where America has flat-lined once again (I exited this movie to the news of the network-televised border wall push, strands of Bernstein in my head), Vice forcefully reminds us of Bush / Cheney's devastating actions and how everything is still swirling in it. Stupidly, the movie filled me with much more dread and sadness than I predicted--even its silly comedic detours (like mid-way credits) are tinged with despair. Greig Fraser's lensing impressively tightropes around all-sorts of varying mediums--from television footage recreations of Colin Powell's (Tyler Perry) fateful UN speech to Cheney bathed in darkness in the open door of the Oval Office (one of my favorite shots). Hank Corwin's editing is slice-n-dice, which worked OK for me, considering the movie's expressionistic tendencies. I was rooting for McKay's ambition but the movie does however get a bit unwieldy as we clang along towards the end. We are left however with an appropriate wrap-up of sobering statistics and a freezing antithesis of Charlie Chaplin's rousing speech in the denouement of The Great Dictator. ***

Posted by MrJeffery at 7:30 PM