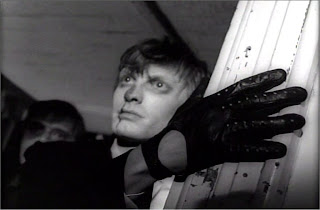 In the mood for Halloween, I re-watched Romero's film

. It's still an unsettling, bleak film--tightly edited and shot in crisp black & white. The no-name, but talented cast and shoestring budget add to the creepy atmosphere.

It's watershed horror, the peak of drive-in cinema, with a nod to films like Hitchcock's The Birds

. In comparison to other horror movies, like the Universal monster series, Dead

is grimier and grittier. Instead of lavish designs, the farmhouse was furnished with items from Goodwill. One of the actresses, Barbra Eastman, contributed to the make-up. Throughout the shoot, the cast helped carry equipment and lights.

In recent years, zombies have become more comic. They are played straight here with some comic effect, but each one, slowly creeping about the front yard, has a memorable uniqueness. 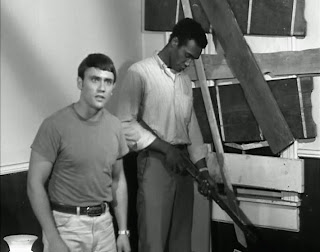 Two performers whose lives were cut at a young age haunt the film. Duane Jones is effective as the film's hero. Merely a truck driver passing through (a la Lilies of the Field

), he fights for his own life but also for the group of strangers he's stuck with. Jones's Ben is a complicated character, originally written--as Romero terms it--as "colorless." The nihilistic ending has given rise to subtext about racial politics and violence in America (Martin Luther King, Jr. was assassinated in the year of the film's release). Jones distanced himself from the film's acclaim and popularity, devoting his life to theatre and teaching. I wonder about (and secretly sort of understand) the reasons for his aloofness. In a supporting role as Tom, Keith Wayne has become a sort of a cult film figure. It's his lone film role.

Perhaps why this film has lasted so long as a horror touchstone, is the subtext that historians and audiences have applied to the film. It's still difficult not to compare the grim news footage of Vietnam with some of the scenes in Dead

. And despite Romero's intentions, the racial issues that one could apply to the film, is hard to ignore, especially since Dead

, Guess Who's Coming to Dinner

). Romero seemed to force sociological issues in his subsequent works, especially Dawn of the Dead

. By being unintentionally subversive, Living Dead

remains one of the most remarkably unique films of its time. ****

Posted by MrJeffery at 8:04 AM