i love you moore 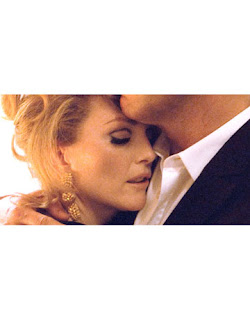 Julianne Moore turns 49 today.
She is a fantastic actor... with a lot of duds on her resume.
Her worst moments are not because of lack of skill. Miscast in Robert Altman's Cookies Fortune and underwritten in Paul Thomas Anderson's Magnolia, attempting to fill the shoes of Jodie Foster's iconic Clarice in Hannibal and Vera Miles in the Psycho remake, at times Moore can look visibly uncomfortable.
And yet when Julianne is given a great role to tackle, her performance has a quiet, devastating power. This winter she's bound to impress again in Tom Ford's A Single Man.
Here are five great performances by Moore.
Amber Waves in Boogie Nights 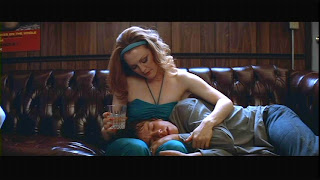 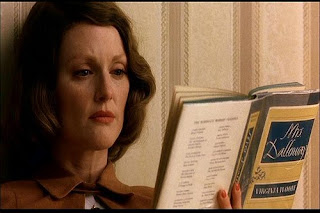 When it was announced Michael Cunningham's novel would be a film, I wondered how such an interior character like Laura Brown be cinematic? She reads, bakes a cake, reads, throws the cake away, and bakes another cake. And yet, Julianne Moore's Laura Brown is a layered, eloquent characterization. Stephen Daldry wisely decided against having an older actress play Mrs. Brown in a final scene, instead trusting Moore's gifts. Bearing heavy (and daring) aged make-up, Moore delivers a haunting monologue of regret. In another scene standout, she communicates with her husband from another room while weeping, but from the pitch of her voice, she sounds perfectly fine.
Cathy Whitaker in Far From Heaven 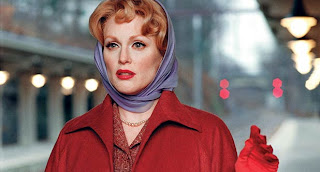 Moore's other 1950s housewife is so removed from Laura Brown in The Hours that it's a marvel she delivered these two remarkable performances in the same year. Chipper and naive, she uncovers the dark secrets of her husband while falling into a deep (and taboo) interracial relationship with her gardener. Moore's Cathy is a touching and unnerving deconstruction of 1950s myths and Douglas Sirk melodramas. Like Todd Haynes's film, she is simultaneously antiquated and modern--an amazing feat.
Carol White in Safe 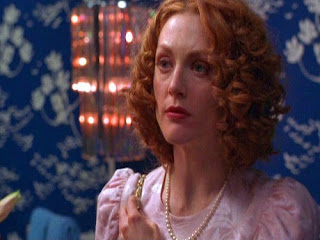 Another star vehicle from Todd Haynes, their first collaboration together, Moore plays a woman who develops a severe sensitivity to chemicals. The film is slightly uneven, especially when Carol enters a New Age clinic for salvation, but thrives on Moore's eerie presence.
Sarah Miles in The End of the Affair 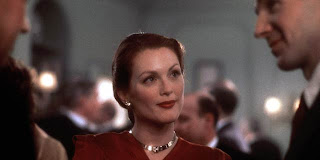 Neil Jordan's film version of the Graham Greene novel is relatively forgotten today but still worth noting for its photography, Michael Nyman score and Julianne's turn as Ralph Fiennes's lover. It's all a pretty gloomy affair but Moore is masterfully understated.
Posted by MrJeffery at 7:03 AM

Email ThisBlogThis!Share to TwitterShare to FacebookShare to Pinterest
Labels: boogie nights, far from heaven, Film, julianne moore, the end of the affair, the hours