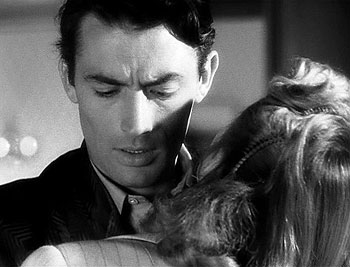 is dated but still a fascinating picture. Made in 1945, in the midst of WWII, the film is one of the first to explicitly deal with the psychological effects of trauma. Gregory Peck, not yet a big star at the time, enters an institute under the guise of a famous therapist, Dr. Anthony Edwardes. Dr. Constance Petersen (another remarkable performance from Ingrid Bergman) takes Edwardes under her wing and unlocks the mysteries of his past and the seed of his psychological torment. What ensues is a theme classic to Hitchcock: the chase. 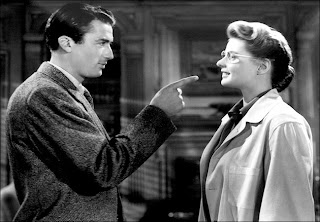 Unlike the electric pairing of Grant and Bergman in Notorious

, the sexual and romantic chemistry between Bergman and Peck intentionally lacks fire. This is a rare instance in a film from the 40s, where our two romantic leads don't quite seem in love with one another at all. Peck is weak and withered, passing out on numerous occasions, while Bergman dominates. I kept wondering, does Bergman's character really love Peck's? Or is Peck's character just another case, another project. It's this ambiguity that adds to Spellbound's

This is the second of three pictures Hitchcock and revolutionary producer David O. Selznick would collaborate on. Their two most memorable works together, Rebecca

, remain curious oddities to me in Hitchcock's cannon. Unlike other Hitch films from the 40s, such as the stark and understated Lifeboat

, they are lush, noticeably overproduced, and as experimental as Hollywood (under the code) could allow them to be.

Adding to the Selznick atmosphere is the spooky, romantic score

(with its moody use of theremin) by Hungarian composer Mikolos Rozsa, which provided the film its sole Academy Award. Hitchcock complained Rozsa's score was too intrusive on his direction. Nevertheless, the music remains a beauty.

Having had successful experience in therapy, Selznick was attracted to the material in Spellbound

. The script by the brilliant Ben Hecht has unfortunately lost a lot of luster through the years. The psychoanalysis mumbo jumbo--similar the coda in Psycho

--is sprinkled throughout. I couldn't help but notice the similarity in storyline to another but very different psyche drama: Robert Redford's Ordinary People

. Both are about freeing the mind from guilt and psychological torment and the irrational malaise society once held (here in the 40s and in Redford's picture, early 80s suburbia) against therapy. 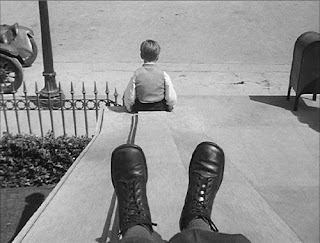 What lures me back to the film, despite the heavy, outmoded dialogue, are the many arresting visuals and rich compositions. There is a fascinating (and fun!) dream sequence, specifically designed by Salvador Dali. A quick, unforgettable image of memory and accidental death (see image above). And a memorable conclusion that involves a gun being pointed directly at the audience--one of my favorite moments in all of Hitchcock's work. ***

This billboard in Times Square and these promotional materials seems to speak of Selznick's gifts as a producer and a revolutionary producer at the time. 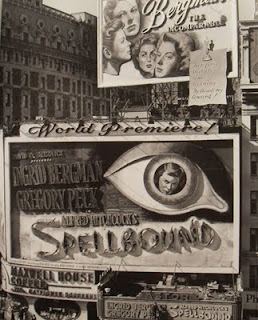 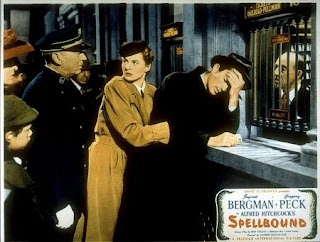 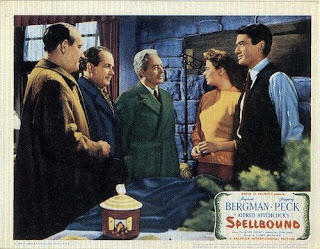 Posted by MrJeffery at 6:48 AM