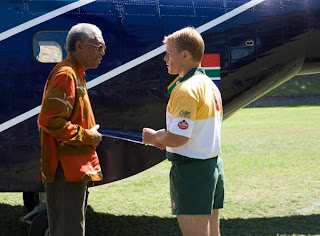 In recent years, Clint Eastwood has blended masculine sentimentality with foreboding themes in a string of morose dramas (Mystic River

). His latest is of a different tone. Invictus

is crowd-cheering, inspirational sports drama uplift to the hilt and yet also grounded by its complicated subject matter and an affecting portrayal of Nelson Mandela by Morgan Freeman.

Upon his new presidency in divided South Africa, Mandela becomes invested in the nation's rugby team, the Springboks. He immediately observes that the South African blacks are cheering for the other side. Soon Mandela begins his personal quest to inspire team captain Francois Pienaar (an exceptional Matt Damon) to win the World Cup and for a moment, unite the nation. The title refers to the poem that the imprisoned Mandela found comfort in; he passes it on to Pienaar to unlock his potential to be a true team leader ("I am the captain of my soul").

Based on a book by John Carlin

, Anthony Peckham's script is a tightly focused exercise in the classic sports drama but also a subtle reveal of racial tensions in apartheid torn South Africa. Mandela's clashing crew of bodyguards ("the rainbow nation starts here") figure as a sort of microcosm. Instead of emotionally investing with any of the Springboks, the movie centers on Pienaar--a simple, rugged athlete who becomes more passionate about his team and his country as the story progresses. When Pienaar visits Mandela's prison cell, it's an undeniably powerful moment. Invictus

is an economical picture: streamlined, stately. I have to admit in the hours after it ended, as in any sports drama that values a good, clean score rather than ambiguity, I felt as if something was missing. And yet the film's shortcomings are somewhat ameliorated by the rigor of Eastwood's direction, especially in the thrilling rugby sequences (the '95 World Cup is practically recreated down to the tiniest detail). ***

Discover more about the film on NPR
Posted by MrJeffery at 7:04 PM