the kids are all right 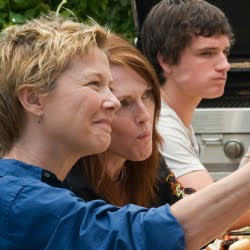 . The family is crowned by two very different women--the controlling, perfectionist OB-GYN Nic (Annette Bening, in one of her fiercest performances) and a laid-back, somewhat aimless Jules (Julianne Moore). Their two children are Joni (Mia Wasikowska) and the jockish Laser (Josh Hutcherson) who decide to contact their mother's sperm donor (Mark Ruffalo). Once the family meets the affable, motorcycle-riding, organic farmer Paul (the antithesis of Nic), Jules, Joni and Laser begin to feel a certain kinship with him. These new bonds test Nic and Jules and the family they have worked so hard to shape.

For many reasons, The Kids Are All Right

is disarming. The cast is small and it moves along in a laid-back way, carefully observing behavior. The appealing but admittedly canned quirkiness of the film's setup (catching Laser and his friend watching gay porn, etc) is undone by a sometimes funny but an emotionally resonant second half. So few films have captured a contemporary lesbian couple trying to raise children so brilliantly. Because well-drawn gays and lesbians characters are absent in many films, there will be those who may criticize when one finally appears and the implications it may have for a mass audience. Though progress has been made, the two heated LGBT issues still floundering are DADT and gay marriage. While efforts to appeal to straights over why these two issues should so obviously be non-issues have been sluggish, the institutions of military and marriage are derided by many within the community. Some may gripe that Nic and Jules aren't positive images of lesbians because they strive for monogamy and mimic a hetero-normative lifestyle that many believe aren't sustainable or healthy. Yet the very real, flawed, loving family portrayed here thwarts any political attacks from the right or left. They are as silly and obvious as the knowingly bad judgements Nic and Jules fling at National Geographic specials. It's refreshing to see this family bicker and love each other in intimate, emotional ways without the tidy, sitcomish resolutions that tatter away at many maudlin domestic dramas of today (i.e. the wan, sans-conflict Blind Side

). The Who song informing the title also describes the grounded and smart children of Nic and Jules, one of which, sets the breezy, casualness of the film with the film's opening on skateboard. The changing social mores reflected in the lot's wry attitudes (Jules and Nic drink from twin World's Best Mom coffee cups) is a welcome breather in the midst of an exhausting, ongoing struggle for LGBT rights in America. Cholodenko peppers the soundtrack

by Bening (the only and last time Nic and Paul connect) but also contemporary pop rock: over the closing credits is MGMT's melodic and somber "The Youth"

an anthem of sorts for generational shift. 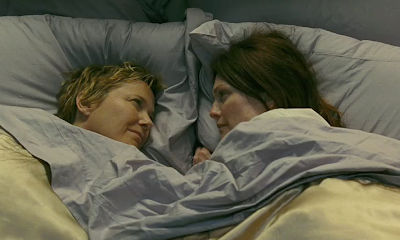 The writing is strong but really the cast brings this unique and intricate family portrait alive. We are used to seeing Annette Bening as flashy, larger-than-life characters, emoting with rapid fire dialogue (American Beauty

) but with Nic, she does a lot without speaking at all. She has some funny moments with scripted daggers (a rant against organic foods is one of them) though an acting class could be devoted to the way she sits at a table, drinking wine, and simply reacts to those around her. And yet, watching the film, Nic is so real that Bening doesn't seem "actorly" at all. It's just fine work. Moore is usually good, but I don't think we've ever seen her with such acute comic timing nor have we seen her hit the emotional register she hits in a monologue towards the film's end. It breaks some rules by summarizing much of the theme but is so wonderfully and organically delivered, I couldn't help but cry at her character's heartfelt passion. Wasikowska and Hutcherson have quieter roles but make lasting impacts. Ruffalo, who was so great as a similar character in You Can Count on Me

, again shades his role with many layers. There is something aching and quietly wrenching about the way he is so dismissive of donating his sperm (he quips that he did it because it was less painful and more profitable than donating blood) and so regretful of being unable to establish his own relationships on a deeper level. Perhaps it's a spoiler to recall this scene but I can't help but end this review on one of the saddest moments in the picture. After fighting with Nic, alone, from an outside window, Paul observes the clan at the dinner table. When he smiles at Laser, Laser turns his back on him. It's all fleeting but because of the steady hand of Cholodenko and all involved, so apt and so very poignant. ***1/2

Great interview with Lisa Cholodenko on NPR and one on Towleroad.

Lesbian perspectives on the film: LezGetReal, Jezebel, Interview with Julianne Moore on Goodkin
Posted by MrJeffery at 4:43 PM