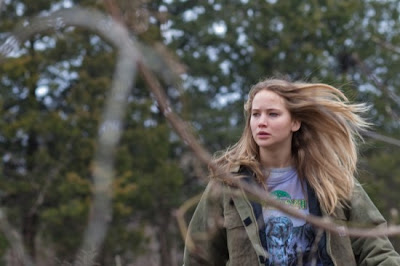 Sometimes the influence of film noir can be found in the most unexpected places. Debra Granik's bleak survival picture Winter's Bone, based on the novel by Daniel Woodrell, focuses on the rural poor in the Ozarks. When Ree Dolly's (a steely Jennifer Lawrence whose flat, toughened speech recalls Lauren Bacall) father disappears, she must find him or she and her family, her young siblings and her mentally fraught mother, will be homeless. The journey Ree ends up taking tracing her father, who cooks meth and may or may not be dead, is a harrowing one. She goes house to house, asking for help, advice, the use of a truck, anything. Yet in an environment where everyone is so strapped, desperate to protect themselves and aren't looking out much for the sake of others, she is met with many odds. Once embroiled in a dangerous situation with a group of dealers, her father's abusive, drug-addicted brother Teardrop (a haunting John Hawkes) figures as an unlikely ally.

The topical subject matter of Winter's Bone isn't necessarily what makes it so wonderful. Like Courtney Hunt's marvelous Frozen River, the emotional resonance comes from the scrappy, richly realized female protagonists who are fighting to survive against tough odds. There are a lot of details pertinent to the locale (bluegrass, squirrel hunting, satellite TV, auctions). Yet, where one could have made something exploitative, Granik proves herself as a vivid, careful filmmaker. It shows greater sophistication than her previous Down to the Bone. It may help that the script is based upon a novel informed both by spareness and Greek mythology (intended or not, Ree's journey is a feminist monomyth). The suspense builds beautifully and the characters are vividly imagined. Akin to his name, Teardrop is a sad, plaintive wreck of a man (once a great player, he is unable to strum a guitar by the film's close) who displays some bouts of tenderness. The story of Ree's father comes out gradually through the stories and reactions of the locals. With all of this, Granik does a lot with the skill of her actors and the power of suggestion on a paltry two million dollar budget. In recent years, it has been inspiring to see female directors such as Granik, Hunt, Kathryn Bigelow, and Lisa Cholodenko getting notice for making powerful films on limited resources.

Interesting Washington Post interview with John Hawkes.
Posted by MrJeffery at 11:35 AM