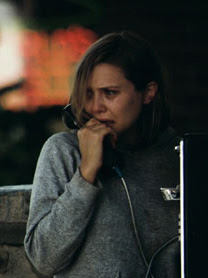 I remember reading Helter Skelter as a teenager and sleeping with the light on.  The murders committed were horrific but so was Charles Manson's ability to manipulate the minds of his followers. Set "somewhere in the Catskills," the cult in Martha Marcy May Marlene is a group of marginalized teens under the quietly sinister rule of Patrick (John Hawkes).  Sean Durkin's mesmerizing film (with an unfortunate title, almost humorously clunky), astonishingly self-assured for a debut feature, is like a good Joyce Carol Oates tale: rich, ambiguous and unsettling.

After escaping the cult, young Martha (Elizabeth Olsen) is taken by her estranged sister (though it isn't exactly certain if they are sisters or not, as it is vaguely implied in the film) Lucy (Sarah Paulson) to her and her husband Ted 's (Hugh Dancy) summer home in Connecticut.  Lucy and Ted are a Manhattan-based bourgeoisie couple trying to conceive, wholly unprepared for Martha's entrance into their quiet existence. The movie is a slowly paced but unrelenting dance between two different lives: the harrowing experiences of Marcy May in rural New York and rattled Martha in a massive glass house on a placid Connecticut lake, piecing together her traumas.

Instead of dwelling in plot mechanics, Durkin offers a Bergman-esque (I recently viewed Hour of the Wolf and was sort of reminded of it stylistically) attention to character and contrast. Moving within the different, but similar, natural environments of Martha's world, the outstanding and evocative cinematography by Jody Lee Lipes reflects the picaresque but ominous landscapes and vacation houses (some of which Patrick's cult invade for obscure reasons).  Durkin has noted that Martha is "trying to figure out the trauma she's been through.  I wanted to be true to that and never wanted to think beyond.... this film was driven by this character and these experiences."  Sometimes this close study of Martha's fractured psyche may be trying for the viewer.  We don't find out much about Patrick except the glimpses Martha has of him in flashback (often she's told, as Patrick cozies up to other female members, that it's not polite to stare).  An acoustic guitar song called "Marcy's Song," reminiscent of Keith Carradine's "I'm Easy" song and scene from Nashville, is objectifying ("she's just a picture") and creepily seductive.  The moment is a highlight of another fine performance from Hawkes.  Elizabeth Olsen (the younger sister of the famed twins, who have their own, tabloid cult-like following) is mesmerizing in the lead and gives the film its emotional complexity.  Olsen displays Martha's traces of happiness in the cult and a damaged, callow state at her sister's.  Photographed often with shadows around her face, she's a magnetic, but not overpowering, presence. 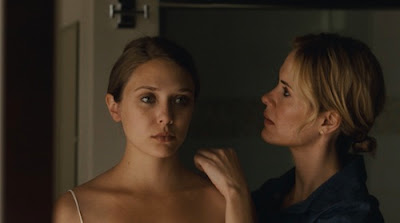 In a sense the film is about two women from a fragmented family, who have taken different paths in eschewing loneliness and establishing a new family.  Seemingly content in a somewhat cold, not very affectionate, marriage and an almost painfully-quiet existence, Paulson's Lucy grapples with both the studied perfection of her life and taking care of her wounded, sometimes hurtful, sister.  Smartly Durkin doesn't make Lucy icily unbearable, instead there's a deep sympathy for her.  In a way, she emerges as the film's unlikely heroine, even as Durkin chooses, in a tense final moment of the film, to suggest that Martha can never be saved. ***1/2

-Jeffery Berg
Posted by MrJeffery at 6:56 AM