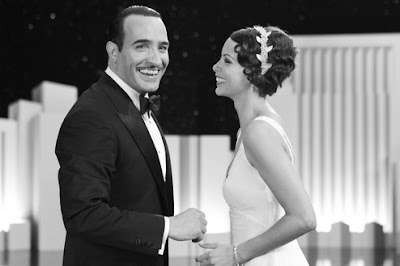 Before my screening of The Artist, there was both a Samsung cell phone commercial which laid out its advantages over the latest iPhone (there's a slightly bigger screen! the memory is just as good... if not better!) and a short doc on the changing nature of Wall Street: on-the-floor traders could soon be obsolete, replaced by computers.  In the new (and mostly silent) throwback picture by Michel Hazanavicius (his Oss 117 films are spoofy spy pic throwbacks) , George Valentin (Jean Dujardin) is an arrogant, thriving silent film star who walks in step with a cute little Jack Russell terrier (Uggie).  By accident, he meets an up-and-coming actress named Peppy Miller (Bérénice Bejo).  As she becomes a huge star for the talkies, Valentin's career quickly declines. 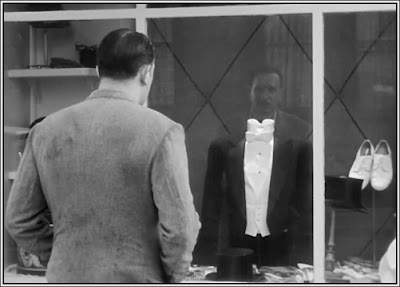 The dapper, Gene Kelly-ish Dujardin fully and smoothly embodies his role as the debonair Valentin.  It's the sort of mesmerizing stunt that seems effortless in its perfection.  His performance, like the script (by the director), has a healthy dose of wit, even as we watch Valentin's spiral into despair (there is literally a shot of him drowning in quicksand).  The movie's climatic moment winks at melodrama.  Exquisite and zippy, but also a bit melancholy, Bejo's (the wife of the director... which could explain why she's so lovingly photographed) Peppy is a perfect foil to Dujardin's Valentin.  She's a bit contemporary looking as well, which adds to the movie's visual tension.  The fine supporting cast includes James Cromwell as Valentin's overlooked assistant, Penelope Ann Miller as Valentin's salty, neglected aging wife (in a platinum blonde wig), and John Goodman as a gruff producer intent on cashing into the latest trend. 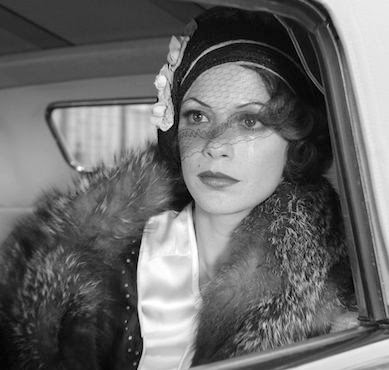 Like films of the late 1920s and early 1930s, the plot of The Artist isn't complicated and often, it's predictable.   The picture itself though is deceptively simple.  It's both a homage to and a parody, in a way, to those slight movies of that Hollywood heydey. It's also a movie rooted in modern anxiety, haunted by the bygone.  The inventive photography by Guillaume Schiffman is done in a cool, never overly sumptuous but more ghostly black and white.  The picture isn't really a silent one as it is aided by an almost unbearably gorgeous score by Ludovic Bource.  Alternating between waltz, slinky slapstick, and majestic romanticism, and even suddenly veering into a fitting use of a cue from Bernard Herrmann's Vertigo (one of the most lush, woozy slivers of music in cinematic history), Bource infuses the film with spirit and energy with what must have been a daunting task. The Artist can be a bit meta (references abound, besides those from silent cinema, most notably a dash of Citizen Kane), but the Fellini-esque bravado of the story moves along to a toe-tapper of a finale, exquisitely choreographed without CGI and excessive edits.  The Artist is a testament to the silliness, kitschiness, and importance of technological and aesthetic change; soon enough the gadgets people are lining up for outside will be just as worthless to the world at large as Valentin's auctioned possessions. ****