track appreciation: "someday we'll be together" - a guest post by jerome murphy 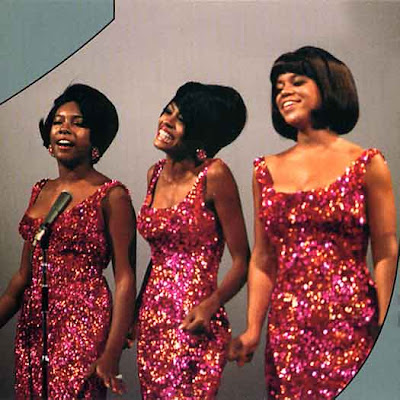 The Supremes' swan song, and the last number one hit of the Sixties, ended an era with a bittersweet promise, and sent Berry Gordy's groundbreaking brand name out on a high note with one of the purest pop tracks ever recorded.

First, cutting into silence, a string riff that sounds like the creeping approach of a single one of Wagner's Valkyries, trembling into the blossoming of the orchestra. Then the plucking, a cocoa-butter balm over some bittersweet wound you neglected, of the acoustic guitar refrain. The heart-beating bass and the percussion start up their organic machine, while the strings pull together the threads of a narrative compelling enough to stand by itself (as shown in the instrumental version).

Then, into this billowing water bed, roll the voices - the gospel-sweet, wistful voices whose mmm-mmms savor the tang of their own harmony, offering a return to some childhood that could never have existed - or at least not with such caramel sweetness. "Someday," croon these voices, with the exalted certainty of churchgoing aunts,"we'll be together."

Against this choir enters the cooing, unearthly echo of Diana Ross's most skillfully detached performance, which never once strains for its sentiments - supple, svelte, playful as she delivers the banal lyrics and simple rhymes that speak of lost love, regret, and hope. It's the simple acceptance and matter-of-factness that saves what would otherwise have been insipid, as well as the jazzy semi-scat of her phrasing as the song progresses. "You're far away/ from me, my love/ but just as sure, my, my baby/ as there are stars above/ someday ... we'll be together."

If she sang any harder than she does, you wouldn't believe her. It's her calm assurance that convinces the listener she knows the truth of the situation between these lovers, and accepts it with verve.

By accident, songwriter Johnny Bristol's coaxing ad-libs were engineered into the backing recording, and retained when Motown's quality control realized how perfectly they complemented Ross's vocals. You tell em! interjects the disembodied male voice, as if in response to a sermon, to ground the angelic aspects of the song in a soil of gravelly soul.

The song's real climax and emotional coda comes not with the high note at the bridge - "cry, cry, cryyyyy!" - but a few moments later, with the singer's breathless orgasmic confession that I long for you -- every, every night, punctuated by a single perfectly pitched angel-coo that sums up Ross's inimitable cotton-candy appeal.

Wearing its layers lightly, "Someday We'll be Together" achieves a more puzzling and compelling interplay of elements than would some more straightforward arrangement. Is this a sad song? A joyful song? A hopeful or wistful song? The portrayal of a deluded lover's dream? A danceable soul track? A slow song to listen to alone, with headphones on? A song for the soldiers in Vietnam, as if Lady Liberty herself were making the titular promise over the airwaves? An ironic commentary on the launch of Diana Ross's inevitable solo career (her backup singers on the track were the Andantes, not the latest lineup of the Supremes)?

Multifaceted, "Someday We'll Be Together" sounds both light and monumental, echoing through through the radio ages as both divinely inspired and amiably run-of-the-mill.

It's hard to believe that even at the time, it sounded like something from the present, rather than from an earlier time. It's like the memory of an ice cream cone you had as a kid - one that tasted uniquely sweet before it fell from your fingers. The one you're holding now doesn't quite compare, but surely someday you'll taste something that good again.

Posted by MrJeffery at 7:46 AM