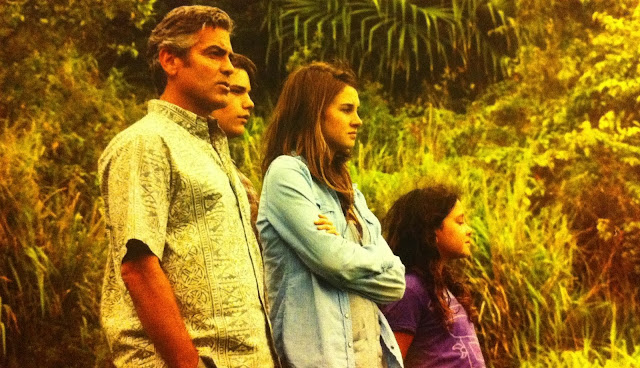 Nearly lost in a maze-like, languid "paradise," George Clooney's Matt King definitely hit an emotional nerve with me in the latest Alexander Payne picture The Descendants, a Hawaii-set family saga so lived in, it's almost unsettling.  After his wife's boating accident leaves her in a coma, King is forced to ascend from self-described "back-up parent" to sole guardian of two difficult young daughters while also mulling an impending sale of pristine, beachfront property in his family's name.

Payne is now well-known for his loser-ish, messy anti-heroic males: Matthew Broderick in Election, Jack Nicholson in About Schmidt and the lovably aimless duo of Paul Giamatti and Thomas Haden Church in Sideways.  These films and his bracing black comedy debut, Citizen Ruth, are contemporary masterworks, unflinching in their portrayals, almost brimming with contempt for American ignorance but not without acute sympathies.  I found Payne's treatment of this broken little family in The Descendants a bit softer than his usual but perhaps it's his most moving film.  It's also a treat to look at and get lost in.  Character studies are sometimes overlooked for their cinematography but the work of Phedon Papamichael is gorgeously done, conjuring both the scenic beauty of the landscape and the intricacies of human behavior (Clooney spying over a beach hedge, Alexandra crying underwater in a leafy swimming pool).  The opening shot features King's wife on a motorboat, looking brazenly free, an image that haunted all of the characters and the rest of the picture.

Based on a novel by Kaui Hart Hemmings, known for her vibrant portrayals of the upperclass from her home state, the comedy of Payne's script comes from the perniciousness of human interaction.  There are no flashbacks, yet through specific details, we frequently get a deep understanding of what these characters were like before their current states.  When we find out that King's wife was having an affair with a real estate agent, aptly named Brian Speer and played with a sort of a dull, all-American guyish creepiness by Matthew Lillard, King becomes increasingly obsessed and ironically begins to bond with his brash daughter Alexandra (an incredibly natural Shailene Woodley).  Before Clooney approaches Speer's wife on the beach, she calls out to her children in the ocean not to leave their zones.  Leaving zones and forsaking decorum not only provides the film its tension but illustrates the Kings in their grief. ****