we need to talk about kevin 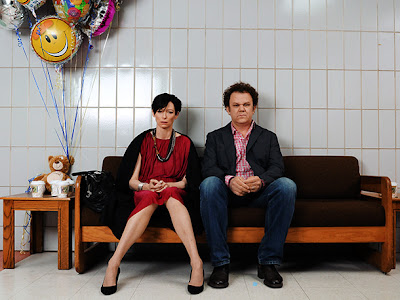 In We Need to Talk About Kevin, Tilda Swinton plays Eva, a mother devastated by the actions of her young son.  What Kevin (Ezra Miller) did that landed him in prison is gradually revealed as the film delves into the Eva's fractured psyche.  Kevin cries a lot as a baby: Eva takes him in his Rosemary Baby-esque stroller to a construction site of jackhammers to mute his wailing.  And then as a toddler, he's cold and unresponsive.  Once he gets to young adulthood, he's obsessed with archery and monstrously manipulative.  Although seemingly cosmopolitan and progressive, Eva doesn't seem to ever go to therapy for her sake or her child's (we are given one instance where she takes Kevin to a doctor for a check for hearing and autism).  Her husband Franklin (John C. Reilly) receives much more adoration from their son and unnervingly and gratingly, he doesn't trust Eva's stories of how cruel Kevin can be to her.  The film seems to be concerned more with how desperately tried to get Kevin's admiration and respect and love despite being rather cool to motherhood in the first place.  The film's best assets are the houses: a gloomy, gray brick fortress-like mansion in a lushly wooded area where Kevin is reared, with clinical, bare and open interiors (the lack of privacy in it... people overhearing each other or seeing one another through windows is particularly spooky) and the one of Eva's present days, a worn little yellow house, splattered with red paint from vandals. 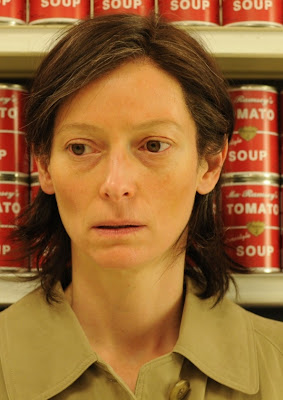 We Need to Talk About Kevin is a tough sit not only for its brutal subject matter but for its the disjointed narrative and irritating soundscape. Tilda Swinton is certainly commanding in the lead role but we are offered very little in terms of her character development.  Her distinctive haunting look and the moves that she makes  are captivating.  Essentially she barely holds this broken film together.  She seems to be the only reason that this film is getting much attention since a better one with a similar story named Beautiful Boy starring Maria Bello was released earlier this year to little fanfare.  Overall in Kevin there is something lacking.  It could be because the film was adapted from a complicated (and what seems to be a richer), epistolary novel by Lionel Shriver with Eva as unreliable narrator.  But also director Lynne Ramsay lays it on too thick (like the red jam Kevin slathers on white bread).  There is heavy foreshadowing (despite not really needing it, since so much is presented in flashback) and an overly self-conscious, distracting and arty placement of the color red in every scene.  It's sometimes laughable in a film that really shouldn't be. **

-Jeffery Berg
Posted by MrJeffery at 8:10 AM

Email ThisBlogThis!Share to TwitterShare to FacebookShare to Pinterest
Labels: lynne ramsay, tilda swinton, we need to talk about kevin