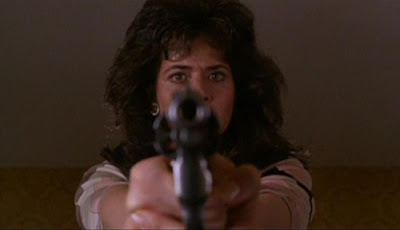 The first year of the 20th-century's last decade proved to be an interesting and varied year for Hollywood.  Martin Scorcese's Goodfellas is regarded in most circles as the year's best film and it's still an enduring classic today. With its snappy editing, freeze-frames, use of soundtrack and incredible long tracking shots, it continues to inspire the style and look of modern motion pictures.  Pauline Kael aptly wrote, "watching it is like getting strung out on pure sensation."  Also worth a watch from the same year is the more subdued mob film, State of Grace, mainly for its great cast (Sean Penn, in a lovely performance, Gary Oldman, and Ed Harris) and its depiction of a changing New York City cultural landscape.  Both of these pictures and the clumsy third entry in the Godfather saga are part of a long history of gangster movies (the quick rush of the rise and the downbeat fall) but notably amp up the gore.  Scorcese's film is the deeper and most complex of the bunch as it winks at the carnal desires of the audience (Lorianne Bracco famously points her gun directly at us).  Jim Shepard writes, "In Goodfellas, violence may not happen when we think it will, and it can happen whenever we relax."  Since most of our film's today are glossed over in CGI, looking back, the pre-CGI 90s seems like a particularly violent and bloody era of movies. In 1990, the cartoonish antics of little Kevin McAllister (Macaulay Culkin) in Home Alone seem so gleefully portrayed that it seems somewhat disconcerting today and difficult to do now in post-Columbine America (word is that the film version of The Hunger Games infers gore rather than presents it by utilizing shaky-cam and quick edits).  In another particularly violent movie of the year, Misery, the horrors and traumas are of the mind and the body and also peppered with black humor (a stylistic technique that would be used in decade-defining films such as The Silence of the Lambs and Fargo).


It's hard to imagine a historical epic movie like Dances With Wolves scoring well at the box-office today, but in 1990, it was a smash and swept the Oscars.  It does have some problematic issues but the movie is sensitively and handsomely made by Kevin Costner and gorgeously-scored by John Barry.  In Robert Baird's essay "Going Indian," he notes: "... Dances With Wolves is a cinematic myth that addresses still unresolved traumas and contradictions of American History." Perhaps there was a desire to attempt to heal past wrongs of cinematic depictions and look back at (and romanticize) previous centuries as one was about to close.  Because of its success and appeal, Dances With Wolves would be a harbinger of Western-tinged historical male action dramas that were popular in the 90s, like Last of the Mohicans, Braveheart, and Legends of the Fall. 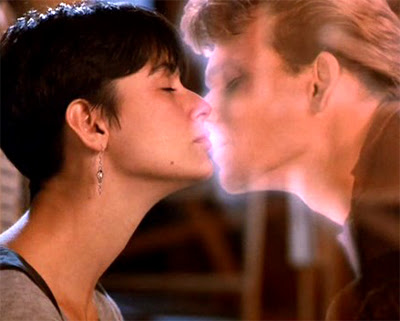 Two of the year's biggest hits were Flatliners and Ghost.  Both had relatively small budgets for studio pics and yet, somehow, struck a nerve with audiences.  It's interesting to see the parallels in the storylines of these two films.  Both are interested in pursuing the idea of what the afterlife is.  The Jerry Zucker film is a treacly romance while Flatliners is the somewhat preposterous tale of medical students who experiment with near-death experiences by going under themselves.  Rita Kempley, of the Washington Post, noted in her review of Flatliners that "Movies about dying, grief and life after death are cropping up like corn in the Field of Dreams as a response to on-screen violence, a reaction to AIDS, a desire for something beyond materialism. And we're grateful for their reassurances even when they overreach themselves. Though it's got its excesses, Flatliners does brings a certain warmth to the chill of the decade."  Whether these films were intentionally responding to a cultural mood is uncertain but audiences certainly responded to them with enthusiasm. 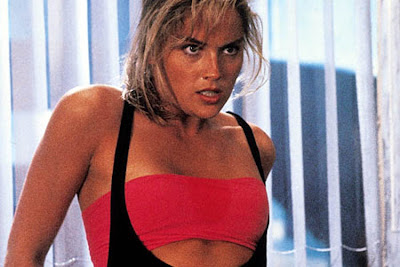 Total Recall is another film that plays with the "other life" concept.  It's cheesy, entertaining sci-fi (Paul Verhoeven is known for movies that toe the line between camp and tony seriousness), with a twisty, boom-bam Flash Gordon style that seems to be inspired by video games of the era.  Loosely based upon Philip K. Dick's "We Can Remember It For You Wholesale," it takes place somewhere in 2084, although the costumes (Arnold Schwarzenegger's dark green barn jacket and Sharon Stone's spandex workout outfits) are distinctly 1990, where Schwarzenegger plays a man on Earth, plagued by nightmarish memories of a past life on Mars.  How Schwarzenegger gets back to Mars, a planet taken over by a fascism, and why his memory was tampered with are the film's sources of adventure.  I really liked Total Recall and I am no fan of Schwarzenegger or action pics, but this one had energy and a tongue-in-cheek vibe to it.  Arnold doesn't say much, which helps, but he's believable and he reels through the picture mostly on his amazing physicality.  The Oscar-winning special effects are quite corny by today's standards, but I can appreciate the work that went into them, and some of the sets are dazzling.  Total Recall 2 was never made until Steven Spielberg's much slicker Minority Report in 2002.

Die Hard 2: Die Harder was another success story in Hollywood's blockbuster sequel formula.  It takes place in at snowy Dulles airport and is merely nothing but a visceral plane crash and Bruce Willis shooting terrorists.  It's sort of a throwback to the doom-and-gloom shtick of 1970's Airport without the cheeky soap opera subplots.  Despite some good action sequences and a nice, brisk opening, it's pretty dumb, and lacks tension, mainly because of its predictability.  If the stagnant, dated feel of The Hunt for Red October signaled the end of the Cold War thriller, for better or worse, mostly worse, the box-office successes of Total Recall and Die Hard 2: Die Harder, would usher in a new era of action pictures with unbelievable plots, full of bombastic effects, explosions, guns, and overly-buff male heroes delivering one-liners.

While there were big action flicks that year, Hollywood reaped a lot of success with sleepers.  Based upon Carrie Fisher's memoirs, Postcards from the Edge features a tumultuous mother-daughter relationship and is one of the few, but successful studio movies of that era with two women as the main protagonists (Thelma & Louise would become the ultimate feminist blockbuster of that time).  1990 was a year of some unusual tales.   Edward Scissorhands is the Tim Burton and Johnny Depp I miss and no longer recognize, then at their most creative, poignant and quirky.  Today, hit movies are often sequels or reboots bloated with expense and effects, but in 1990, many smaller-budgeted projects like Pretty Woman (and aforementioned Home Alone and Ghost) had original stories that were appealing to wide mainstream audiences.  Even though the merits of these movies are debatable, I sort of long for that era of smaller, quality studio pics.

Meanwhile The Awl fondly remembers the films of 1995.
Posted by MrJeffery at 9:27 AM