rags to riches to less rich but still rich 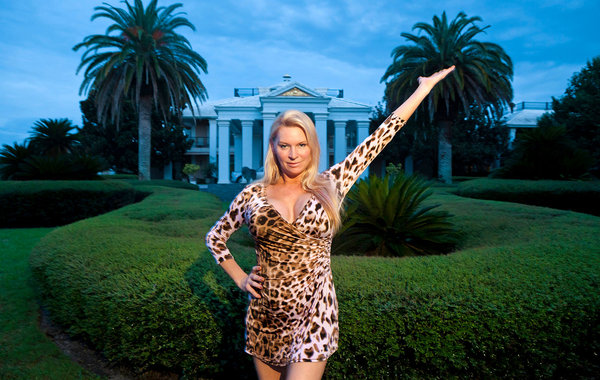 There have already been a few great documentaries (Inside Job and Client 9: The Rise and Fall of Elliot Spitzer) that have examined and exposed the cause and effect of the 2008 economic crisis, but Lauren Greenfield's The Queen of Versailles may be one of the most offbeat and intimate. The film follows David Siegel, a billionaire owner of Westgate Resorts, and his wife Jackie and the construction of a 90,000 square foot home -- the largest in America -- at the foot of a Florida lake, the architecture modeled after Versailles. For the time being, the couple make do in an extravagant 20,000 square foot mansion of eight children, pets (two of the beloved dead dogs are stuffed in glass cases), and things galore (the Siegels have a Trumpy taste in decor and aesthetics).   But Greenfield goes beneath the tacky, gilded surfaces of David and Jackie and reveals their humble origins.  Jackie grew up in Binghamton, New York, did some modeling, worked for IBM then married David, becoming Mrs. Florida.  Ironically, David's parents lost all their money in Vegas -- his rise and his mammoth resort comes across in the film as a tribute to them.  David's shifty timeshare business, co-run by his son (he tells us there is no emotional connection between him and his father, everything is strictly business), is booming off of "cheap money" until the economic collapse.

There are some stagy moments (Greenfield has admitted that some things were shot out-of-sequence) but Greenfield's background in photography is a luminous asset to this film.  The cluttered rooms, gleaming limos, and dusk and night shots are full of eerie and ironic touches. Greenfield gives us some insight into the lives of children and the help (one of them has to dress up as Rudolph for a Christmas party -- in a scene that's both sad in its degrading implications and amusing).  Ultimately the Siegels seem unable to take care of everything they've collected and made including those around them; the death of a pet lizard is a stirring symbol of neglect.  Even when things get a bit repetitive in the film's somber final act, everything in Greenfield's picture, and its thematic obsession with rooms -- big and small / messy and clean -- is distinct and interesting.  David is surprisingly candid for someone who comes off in the doc as crooked and loveless; in one scene he describes his timeshare clients as "moochers" (though it's unsaid and understood that he's the biggest predator and moocher of all) and brags that he is the reason that George W. Bush became President. These are the sort of crazy moments you can't believe someone would admit on film (not surprisingly, Siegel has since sued Greenfield for defamation) and for that, Queen of Versailles is maddening and also an essential and sprawling portrait of these American times. ***1/2

Posted by MrJeffery at 8:05 PM