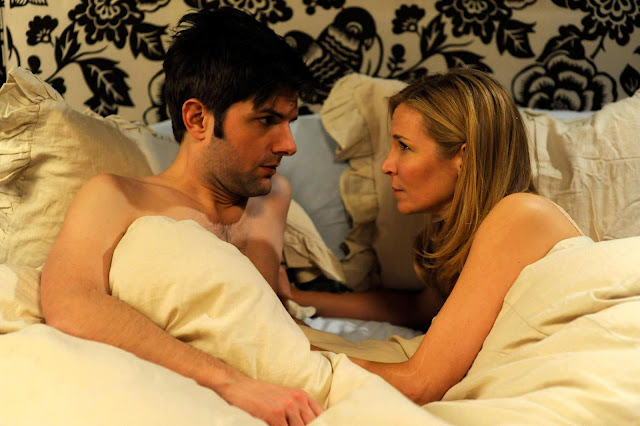 "Turn off the lights / the party's over / they say that all good things must end."  The Willie Nelson lyric from "The Party's Over" is an apt description of the parents in Jennifer Westfeldt's disappointing comedy Friends with Kids. It begins with a snappy title sequence, centering upon a group of yuppies having dinner in downtown Manhattan. The film suddenly skips four years where one of the couples: Maya Rudolph (an actress with such presence and immediacy) and Chris O'Dowd (lovingly scruffy and believable) are now parents to a rowdy child and who live in -- o, the horror of horrors -- Brooklyn. Westfeldt plays Julie, consistently caustic and dating the wrong guys, who decides, for some reason, to have a child with her bosom buddy from college, Jason (Adam Scott). The two share a lot of in-jokes like which way would they would prefer to die. The movie skips along again to them as platonic co-parents of a kid named Joe.  But then Jason meets Mary Jane (Megan Fox) in the park and they start dating and... I kept wondering, is this plot any better than The Back-Up Plan (that J-Lo has a baby movie that's frequently on Showtime) or The Next Best Thing or any other romcom where kids are treated like props?

Whether or not you have a tolerance for these kind of characters, blissfully unaware of their privilege, will likely inform your opinion on the flick from the get-go. As evidenced in her Kissing Jessica Stein, Westfeldt has a wry way with dialogue and the ensemble cast here is certainly appealing (many from the far superior screwball comedy Bridesmaids).  But Westfeldt consistently goes for a sitcom "How I Met Your Mother"-style (obvious scene set-ups, lame bathroom humor, unfunny dialogue) that wastes her ensemble.  It's a shame because there are some scenes that are wonderfully played by the cast (a small elevator scene for example, which feels like one of the few natural moments in the flick) but in the end, we barely get to know these characters -- surely they could be more interesting than what we get at their irritating surface levels. *1/2

-Jeffery Berg
Posted by MrJeffery at 9:25 AM