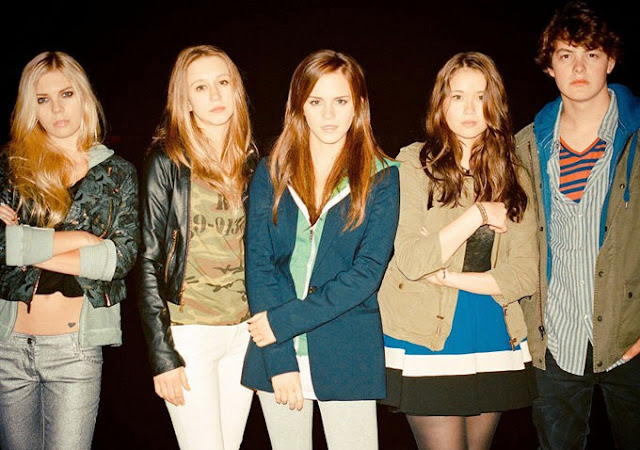 Just the other day I was watching some of Sofia Coppola's The Virgin Suicides.  I had forgotten about that dirge of a movie, with its eerie Air soundtrack, Giovanni Ribisi's moody narration and Edward Lachman's yellowish-green tinted cinematography.  I remember being riveted and unnerved by it when I first saw it in theaters in 1999.  Since then, I've always looked forward to what Coppola comes up with next.  The Bling Ring may be her best and most entertaining since Lost in Translation.  It's based upon a group of teenage Calabasas misfits who broke into some celebrity mansions, stealing swag. I missed this story when it was reported on blogs and entertainment news, perhaps because my attention was solely on the Presidential election in the fall of 2008. The incidents were even made into a Lifetime movie, which I haven't seen, but can't imagine has Coppola's unique sense of rhythm and keen insight into glamour's bitter pills. 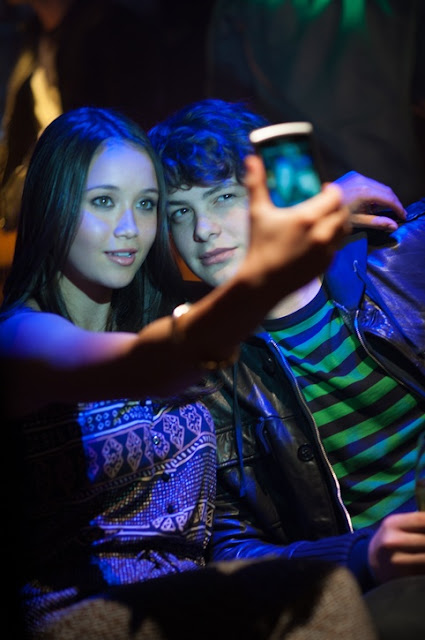 Coppola's film smartly sets her materialistic characters in a taut fashion and image-obsessed vacuum.  Realistically, they are also clumsy criminals (Coppola first gave her actors a chance to "rob" a home, just to see what mistakes they would make).  Ringleader Rebecca (Katie Chang) is perhaps the most adroit and fearless.  She quickly latches onto awkward newbie Marc (Israel Broussard) who expresses a similar interest in fashion.  In a great early scene, she takes Marc with her to pilfer cash and a purse from parked cars along a neighborhood street.  Marc, desperate for friends and tired of his humdrum, not-attractive-enough existence, yearns for a more exciting life; for the rest of the film, she seems to use him as her sidekick.

There are some flaws. The script moves through some Social Network-future narration style, a conceit that really didn't do much for the drama of the pic. In fact, I think it would have been more claustrophobic and tense to tell it in a more straightforward style.  I also thought the scenes with Leslie Mann and Emma Watson, though undoubtedly amusing, had comedy that was "too broad" (almost John Waters-y) that didn't fit in with the naturalistic feel of the rest of the flick; I didn't really buy Mann's Secret-obsessed character either.  Here I felt the picture seemed like it was straining to mine social commentary, something that critics seem to complain there isn't enough of it, though I feel the movie had enough of that on its own merits (the use of Paris Hilton's real home and her invitation to re-create the robberies there is unsurprising and fascinating). Whenever the movie focused on Mann and Watson, I felt that the satire wasn't as interesting as what was going on in the rest of the picture.  Because of this, the most well-known stars (Mann and Watson and Gavin Rossdale as a sleazy club owner) surprisingly are the weakest of the cast.

But the strengths pretty much outweigh the flaws.  The film effectively oscillates between exhilaration and disappointment. I loved watching Chang take on her character's mischief, dishonesty, and yearning so subtly (a long-take scene where she gleefully sings along high to Kanye West's "All of the Lights" and another where she sprays perfume on her neck are stunners).  Broussard effectively gets his character's paradoxical ways.  In a small role, Claire Julien, daughter of Dark Knight cinematographer Wally Pfister, completely shines.  She is the principal figure in another great long-take shot in a beige toned-sunlit kitchen.  In that scene, the satire somehow works and its a mesmerizing moment. The brazen pop-rap song choices are outstanding as well--M.I.A., Azaliea Banks, and more--and fit in with what the characters would be listening to and the tempo and glamour they aspire to.  The film is dedicated to its late cinematographer Harris Savides who wasn't able to finish filming, his work is aided by Christopher Blauvelt and the photography is alluring and stunning--especially when the camera lingers over Paris Hilton's collection of shoes.  ***