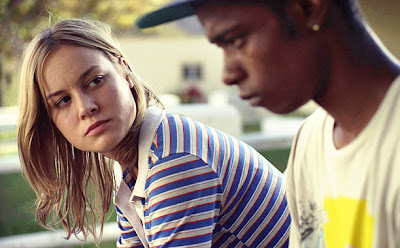 Hawaiian-bred Writer / Director Destin Cretton based his moving and striking new film Short Term 12 on experiences working at a facility for troubled, at-risk youth.  Originally he made a short with a male as the story's lead supervisor but while working on the feature, he changed it to center upon a female named Grace.  Portrayed by Brie Larson (Rampart, "United States of Tara," The Spectacular Now), in an aching, warm and believable performance, Grace and her boyfriend Mason (an excellent John Gallagher Jr.) are counselors for foster kids in a sunlit, one-story cinder block building. Nate (a funny Rami Malek) is a nervous fish-out-of-water, new addition to the staff. The kids include bottled-up Marcus (Keith Stanfield) struggling with past abuse and dour, insecure young Jayden (Kaitlyn Dever) who ends up rattling the usually resilient, thick-skinned Grace.

Shot on RED Epic by cinematographer Brett Pawlak, the somewhat unsteady camera often follows Grace dauntlessly moving room to room (closed doors and sharp objects aren't allowed); therein, for her and the audience, lies the fear that one of the kids, many who are impulsive, may harm one another or themselves. It's lit with a honeyed, yellowish glow that adheres to the contradictory aspects of the storyline and of its complex characters; it's a look that manages to be dingy and raw but also warm and hopeful. The quiet, unobtrusive score by Joel P. West is an opus of strummed guitars, strings holding out lengthy notes and subdued piano chords.  Cretton's script feels natural, dotted with quickly-paced disarming little moments, but also focused and well-structured.

I quickly realized the subtlety and strengths of Short Term 12 when Grace and Mason are first seen together at home after a day of work.  They acted so differently in these different environments; at first I thought Grace's boyfriend was someone who looked just like Mason but Larson and Gallagher are so harmonious and natural and the direction is completely unadorned.  To prepare for the role of Grace, Larson researched material on the film's subject matter but also delved into her character: "I'd go into a corner and drink a lot of black coffee and get myself feeling really ill and say, 'I'm going into the pit.'" Gallagher's Mason adds balance and shades of humor--you can see why the two are in a relationship and sometimes, why they would be drawn to their occupation.  The sufferings of the characters are sometimes brought out metaphorically and with resonance by the cast: Dever's harrowing Octopus story monologue and Stanfield's rap solo. Deft, unsentimental and evocative throughout, the film refreshingly doesn't harbor upon obvious tropes and never vocalizes easy conclusions: it's often a film about what's unspeakable.  Yet underneath, there are many traumas, including Grace's past abuse, and the sometimes sad predicaments of the kids.  The story almost veers into melodrama in the latter half when the tragedies are tripled, but Larson and the restraint of Cretton's direction steer the ship steady.  ***1/2