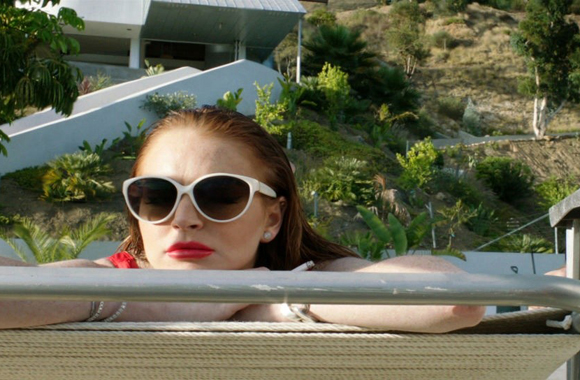 As inferred by its trailers, those expecting a glossy good time may be let down by Paul Schrader's (American Gigolo, Affliction) latest The Canyons, a Kickstarter funded film set in L.A. penned by Bret Easton Ellis.  James Deen plays Christian, a manipulative and callow trust funded movie producer who dates struggling actress Tara (Lindsay Lohan).  Christian is intent on finding out more about an affair Tara is having with the hunky star of his latest flick. Tara seems to only be with Christian for cash and laying out by the pool and not having to go back to her former hardscrabble life.  Christian ends up getting revenge in all sorts of wicked ways, which we find out is a common thread in his history.

There are some shots reminiscent of Schrader's Gigolo (the poolside stuff, the driving scenes, a walk through a record store, a sit below a trio of identical art pieces) yet the muted, listless Canyons ends up lacking the spark, spunk and craft of Gigolo and this spring's pair of caustic pictures of dissatisfied glamour-hunters (Spring Breakers and The Bling Ring). The Canyons sometimes has a strong, gloomy backdrop, as evidenced in the cynical and spooky opening of abandoned and decaying multi-plexes.  The characters in this barren landscape have half-hearted conversations while dabbling with their cell phones (to this film's credit, this is the first time I've really seen this done so well in a movie). And Canyons ends up becoming a pile-up of disappointing rendezvouses: a dour and bland group sex scene replete with strobe lights; a cut-short cock-sucking; an awkwardly placed therapy session with Gus Van Sant that seems to be a sardonic riff on Good Will Hunting.

There hasn't been much tabloid focus on Lohan lately since she has been upstaged by Amanda Bynes as this decade's latest former Hollywood princess teen gone awry. The casting of her in this role is inspired (and sort of sadistic) even if it ends up being a wasted opportunity.  One doesn't have to be a zesty, peppy presence to give a film life; Lohan, worn-out and vulnerable, lends The Canyons chilly realism. She has a great Century City mall-set monologue and some good, on-point reactions to her "Text TV." Unfortunately, everyone around her is dull, including the lackluster Deen. I guess people like him 'cause he's an atypical porn star and has a nice dick. I don't know, I kept getting bored and started looking at my phone. **

Posted by MrJeffery at 5:38 PM