Sometimes the best dramas boil in confined spaces. Filmed in Pittsburgh, occasionally moving out of its tiny backyard, Fences breathes and wheezes within small sets, always swinging mightily, sometimes missing, sometimes cracking under the weight of obvious metaphors and yet, I was fully engaged with the crisp dialogue (authored by August Wilson, from his famed, seminal play), the brisk rashes of humor, and the appealing cast (primarily Denzel Washington, Viola Davis and a salt-of-the-earth turn by Stephen Henderson). Washington owns the thorny monologues that sway between tall tale and hot truth of his garbage man Troy--a character fully alive in complexities and bigness. And Davis, as his wife, brims with scorching intensity, sadness, and occasionally will break into sunshiny laughter. Her Rose feels, in a word, human. 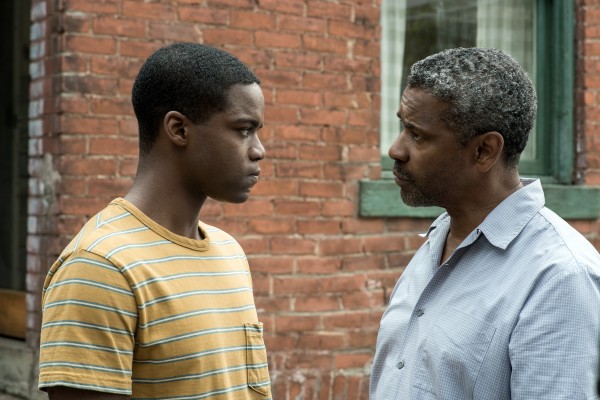 Classical literary devices abound: Rose's name, the title's meaning, the appearance of the wise "fool" (another difficult-to-act character played with gusto by Mykelti Williamson)--and although they were sometimes creaky and made me imagine all of the English class essay assignments this material must have spawned, there was something refreshing about the resistance to scale back on these elements which we often don't find in films of late. In fact, there have been a few notable misfires in recent years with pedigree stage-to-screen adaptations (Doubt and August, Osage County among them), but instead of feeling perfunctory, Fences feels like it has a pulse. It helps that Washington as director is so close to the material: when it focuses on the writing and actors, its nervy; when it aims for cinematic sheen (like the overly gilded sunlight in its coda), it's less compelling. While the gauzy distance of film may not cut to the bone as this may have in the intimacy of a stage setting (I wish I had seen it, especially with these actors), the writing is so electric and the complexities of these characters' situations are so finely-tuned. ***1/2