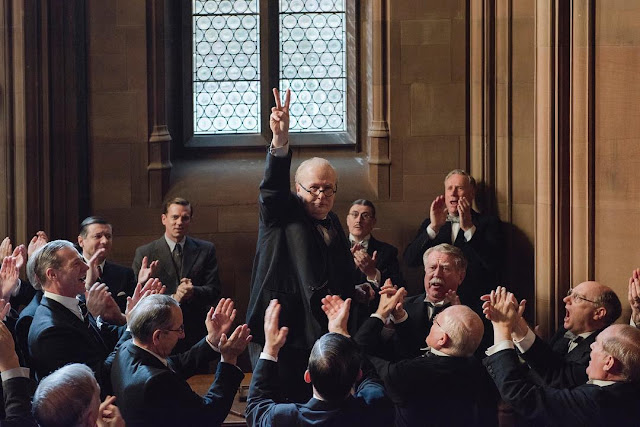 Joe Wright's films have varied in quality from the polished, entertaining adaptations of Atonement and Pride and Prejudice to the sluggish Anna Karenina. But all have a distinct, sometimes risk-taking visual flair employed by Wright and his usual top-class team. Darkest Hour, a back room drama of Winston Churchill's (Gary Oldman) first days as Prime Minister, leading the charge for a revived effort in World War II, is traditional, rather uninteresting fare. 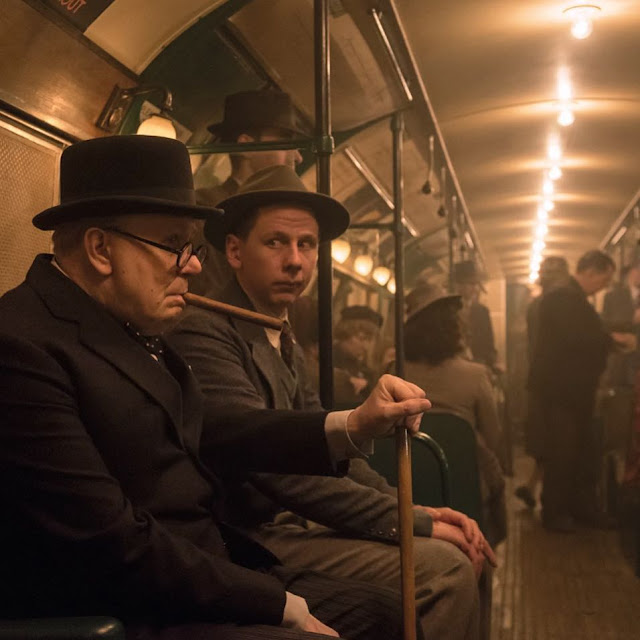 It arrives so closely to the more inventive Dunkirk which arrived so closely to "The Crown" which arrived so closely to The King's Speech, that it felt like a jumbled combination of well-trodden territory. The script is a pastiche of Churchill speeches and conversations and some tart zingers. You would pass out if there was a drinking game every time someone utters the word "sir." The photography by Bruno Delbonnel utilizes a dull, bleary-eyed palate that has the color scheme of oatmeal. The days literally clank by in big font, to remind you this is England's darkest hour. And typewriter keys click and clack with leaden plunks to remind you this is a movie about the power of speech-writing. Wright has this designed his piece with little mystery and as a crowd-pleaser--ending on a sugar-high note with a recreation of the "never surrender" call-to-action. Even in these splintered times, it's hard to resist. There are a lot of masterly tech touches too, such as the composition of some of Delbonnel's shots and the sound design--I particularly loved the phone call with FDR. 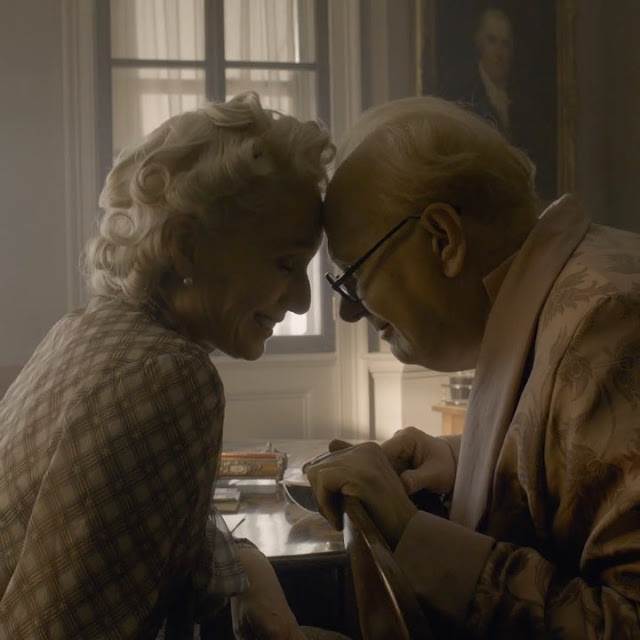 Much will be made of Oldman's performance, perhaps for eternity. It's the actorly, ferocious, grandstanding turn that's not in vogue these days, but will likely nab him praise and an Academy Award. But just contrast last year's winner Casey Affleck's taciturn plumber frozen in grief  to Oldman's cigar chompy, bumbling, shouty and emphatic Churchill. It shows a true dichotomy in cinematic acting styles. But the roles are also vastly different. One is completely flummoxed by communication and the other is one of the great orators of history. For me, if there's a big performance sucking up all the air in the room, there is hopefully at least a sense of tension (this is oddly a movie with absolutely no tension despite all the speechifying) or something happening with the supporting players. Unfortunately Churchill's stenographer (played by Lily James) is wan and lifeless (her character's story is far more arresting in "The Crown"). As an actor, Kristin Scott Thomas breathes some light and life into the movie whenever she briefly appears but her supportive wife role as written is throwaway and cliche. It's hard to dislike a movie though that the director has obviously put much care and thought into. Also Oldman, a hard-working actor's actor, looks like he's having fun chewing the pallid scenery. **1/2

Posted by MrJeffery at 8:39 PM